Procrastination will kill you

Being a team collector is a lot of fun.

If you keep up with organizing your cards.

I worked hard on my Rangers wantlists over the course of more than a year.  It's been a great boost to my collection, but I find myself posting (hopefully) packages of cards and then sticking them in a box to be sorted "later".  The problem is "later" never comes.  Until now.

I've been sorting through three 800 count boxes of "I'll sort them later" Rangers.  I swear about 1000 of those cards are 1987 Topps, but I have managed to knock a few things off the wantlist.

Now, it's on to sort some more, but never fear, I actually have an intersting post about a brush with Ranger greatness that took place last week.  I should have it ready for your viewing pleasure tomorrow.

I don't normally buy cards at the Dollar Tree in my area.  Those little junior dollar packs are more pawed over than the packsearched cards at Target and Walmart.  However, I usually do glance at the rows of gravity feeders to see what they have in stock.

I was surprised to see a half full box of little 6 card repacks.  Not exactly a bargain for a buck, but some of them showed color on the front.  Now, call me a packsearcher if you must (them's fighting words though), but these packs were clear poly-packs and I did pick out 4 that looked interesting.

As you may or may not be able to see, the four packs show 2012 Topps cards on the front.  There are three gold parallels (Steve Cishek, Adian Beltre and Clay Rapada) and one blue parallel (Josh Hamilton).  I wanted the Rangers for myself and was hoping to pull some serial numbered insanity cards for Robert over at $30 a Week Habit.

Without too much fanfare, I'll show off the packs in order of interest.  Except the first pack. 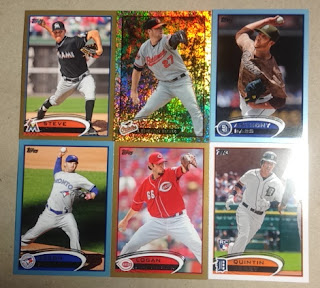 It had two golds, two blues, a sparkly and a repeat base card from the first pack.  Robert doesn't need either of the numbered gold parallels, but I was happy to get such a variety of color. 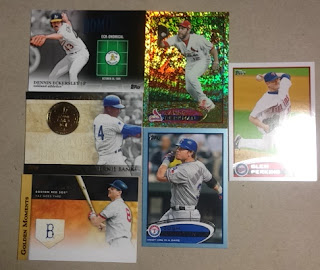 Pack three was another surprise.  It had three inserts, a Lance Berkman sparkly and of course the Josh Hamilton blue parallel that was on the front.  Let's not forget the Glen Perkins base.  Or, maybe we should. 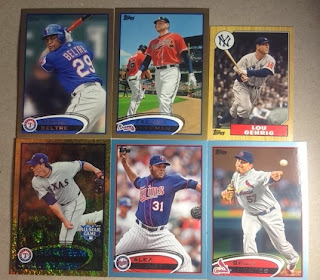 The last pack was the best.  It had an Adrian Beltre gold, a Freddie Freeman gold,  a Lou Gehrig 1987 mini, a Joe Nathan sparkly, and two blue parallels.  Not too shabby for a buck.

I guess all that really comes to mind is "I'd buy that for a dollar".

Kudos if you get the reference.

Giving away all my 2013 base cards

Hold on, don't get too excited.  This isn't a contest and I didn't suddenlty turn into Crackin' Wax.

My youngest son, age 11, came up to me the other day and said he wanted to start collecting baseball cards.  Ten minutes later, I regained consciousness and asked what brought about this change of heart.  You see, this son is the one who takes a book to the Rangers games and has never shown any interest in baseball.

I don't know how long it will last, but I told him I'd give his collection a headstart by giving him all my base cards from this year.  Right now he is primarily interested in whole sets so we are getting things organized and I'll post wantlists for him next week.  I'm the most disorganized person I know so this will be fun.

Speaking of organizing, I've been sorting cards into KEEP/TRADE boxes.  I've got about a dozen trade packages ready to be shipped when I can get to the post office.  I really need to get these out because I've promised some cards to some and owe others for packages already received.

Like The Diamond King who sent over a great package including these three beauties. 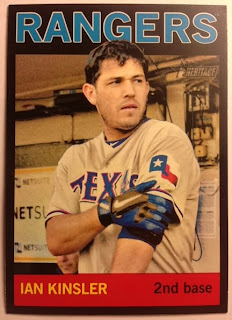 I didn't buy any of the Target Heritage blister packs that had the black parallels so it's nice to finally have one via blogger mail. 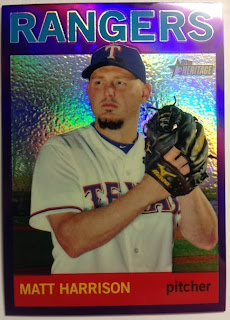 The Diamond King included another first for me with this 2013 Heritage Purple Matt Harrison.  I don't know about purple as a color on cards, but I'm a sucker for parallels so I'm happy to have it. 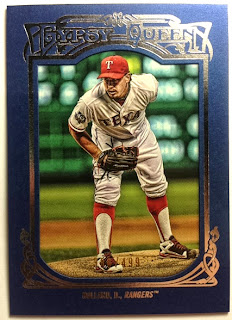 Three cards, three firsts.  Well, I did pull a blue framed card from GQ this year, but it was a Marlin so this is my first Ranger.  It's Derek Holland with his goofy mustache.  I'm not missing that monstrosity this season.

Thanks for the cards DK and look for some new wantlists coming next week!
Posted by Play at the Plate at 7:30 AM 4 comments:

One of the best parts of blogging is trading with other people.  Like many of you, I enjoy acknowledging my trade partners by posting some of the cards they send me. Unfortunately, I've fallen woefully behind in fulfilling this duty.  In order to catch up a little, I've picked three recent trade packages and pulled my favorite card from each package.

First up is one of the hottest players in baseball. 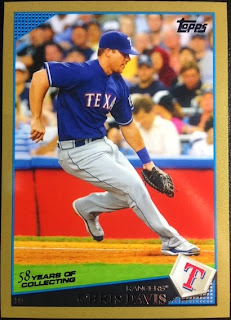 This 2009 Topps Chris Davis gold parallel is #1014/2009.  It was sent over with a bunch of other gold parallels and some Target Reds as well from Fantastic Catch.  Chris was full of unfulfilled potential as a Ranger, but he's really blossomed this year.  I'd prefer he not hit anymore homers against my Rangers, but I hope he finishes the season the way he's started it. 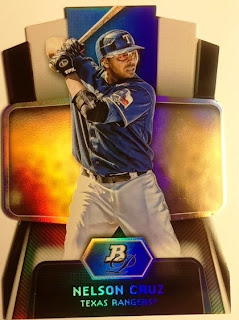 Next up is a sweet 2012 Bowman Platinum Nelson Cruz die cut.  Unfortunately, from the chatter around MLB, it looks like Cruz might be "cut" out of about 50 games in the second half thanks to the latest PED scandal.  I hope it's not true, but I'm afraid it will turn out to be the case.  This card and a bunch of other Bowman Platinum as well as Topps Walmart blue Rangers came courtesy of Ryan over at Ryan's Pitch. 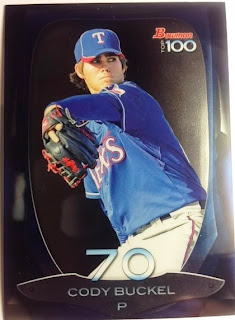 Last, but not least, the heavily eye-browed Cody Buckel from 2013 Bowman.  It's a little hard to see in this scan, but I don't think he could pull his cap down over those things.  Robert from $30 A Week Habit sent over a few 2013 Bowman parallels.

Many thanks to these three fine gentlemen and all the rest of you who have sent me packages.  I'm slowly working my way through them!

May the odds be ever in your favor.

This post isn’t about Katniss aka Jennifer Lawrence. It’s about odds. As in, the odds of pulling a certain card from a pack.

I emailed Chris over at Nachos Grande about this because he’s a math guru. My question was about the odds of pulling a black bordered Chrome refractor from 2013 Heritage. Not just any refractor either, but one of a particular player.

Since the black bordered Chrome refractors are inserted at a rate of 1:368 packs (for both retail and hobby), it makes sense that the odds of pulling one are 1:368 packs. That’s math I can understand.

Bear with me just a minute and this will make sense (or not).

If there are 64 of each refractor, for a total of 6400 refractors, and they are inserted 1:368 packs (overall) that should mean that Topps made 2,355,200 packs of 2013 Heritage. Does that sound right to anyone? I have no idea what their production numbers normally are so I don’t know if that sounds high, low or normal.

As I thought, and Chris reinforced, with 100 black bordered Chrome refractors available, that makes the odds of pulling any one specific player 1:36,800 packs. So if you’re hoping to pull your favorite player, forget about it. Chris pointed out that these numbers make sense if Topps really does load out the packs randomly, but who knows if they do that or not.

I said all that to show you this card that I pulled out of a blaster a couple of days ago. 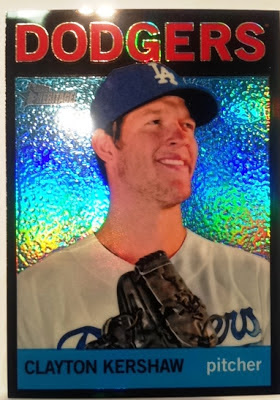 That’s the favorite player from the favorite team of quite a number of bloggers. I don't have it sitting in front of me, but I think it's #52/64.  And it’s so nice looking I really want to keep it. Or trade if for one of the 6 Rangers black Chrome refractors that are available. I’ve looked and these Kershaws have sold on Ebay for anywhere from $15 to $40. It’s a beauty isn’t it?

If this play isn't on a card next year...

I'm going to be upset. 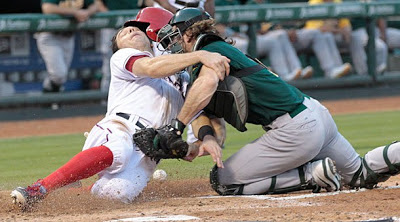 
Ian Kinsler scored and he needed three stitches to stop the gash in his cheek from the helmet of the A's catcher John Jaso.

Trading for a player to be named later

I recently saw Chris over at Nachos Grande post a 2013 Gypsy Queen Adrian Beltre jersey card.  Of course I wanted it and Chris was nice enough to send it over. 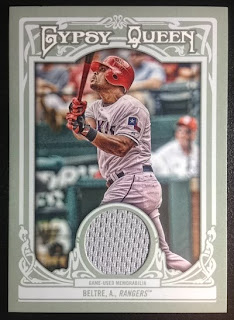 That's not a bad card at all.  Naturally, I didn't have any Reds relics to trade for it, but Chris was willing to send it my way for a Ginter relic card to be named later.  Hopefully, I can pull something Chris will like when my Gint-a-Cuffs box gets broken.

Chris sent over a small group of other Rangers cards and two of them jumped out at me. 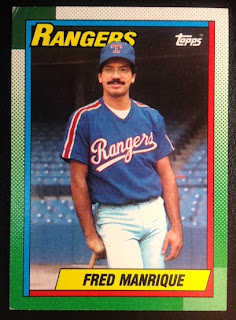 You tell me.  Is Fred Manrique just modeling the Rangers uniform or is he an actual player?  Hmmm....? 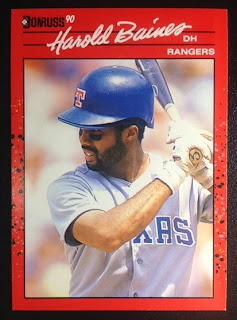 Dig the batting helmet over the cap.  I remember that's the way we rolled when I was in Little League.

Ok, that's the short version.  Many thanks to Chris for the deal!
Posted by Play at the Plate at 5:30 PM No comments:

Well, this card isn't really all that old. 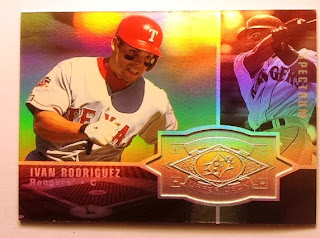 I know that's a horrible picture, but it's a nice card.  It's from the 1998 Upper Deck SPX set.  This set was right in the middle of my huge spending days and I bought quite a bit because I loved the serial numbering.  This one is #1294/1750.  1750 is a big print run nowadays, but back then it was a nice low number. 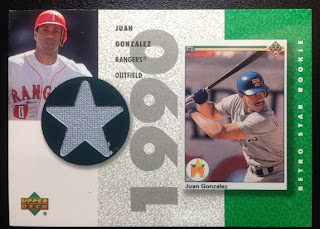 Ok, I didn't just pull these cards out of a hat and decide to post them.  These came from the one and only Fuji of The Chronicles of Fuji.  Apparently he finds awesome cards at flea markets and lucky for me, some of them were Rangers. 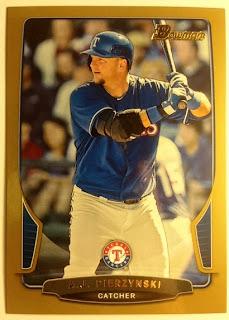 Included in the lot were three 2013 Bowman gold parallels.  The well armored AJ Pierzynski.   Someone told me before the season that I would like AJ.  So far, they are right. 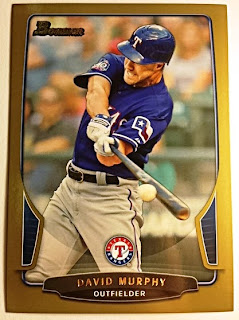 The struggling David Murphy.  I badly want Murph to succeed.  So far he's just been bad.  I hope he turns it around. 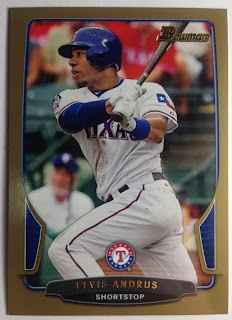 Elvis is leaving the building.  Well, not really.  He doesn't hit that many homers.  He's gold in my book though.  Bowman Gold.