The Twitterverse is an amazing place and you can find some amazing cards there.  Even if you're not too fond of the player on the card. 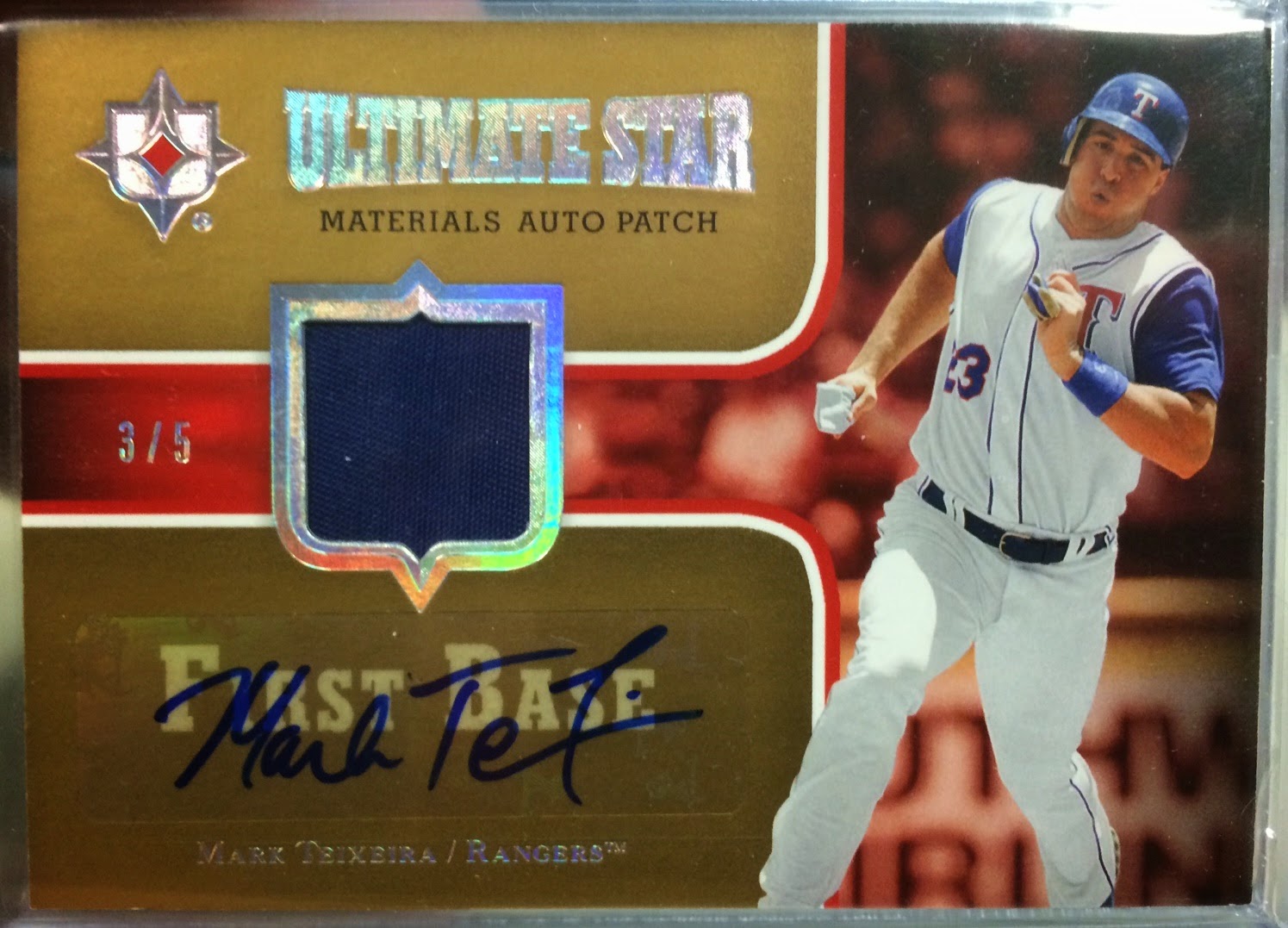 Case in point.  This Mark Teixeira Upper Deck #3/5 auto patch came to me from Travis, famously of Punk Rock Paint.  He threw it up on Twitter and I just couldn't resist even though I'm not a fan of Tex.  I liked him well enough when he was here, but there was something douchebaggery about him and he got the Yankee stink all over him.

Oh well.  It's a nice card and probably the lowest numbered auto in my collection.

Thanks Travis!
Posted by Play at the Plate at 7:30 AM 4 comments:

At least there's free shipping.
Posted by Play at the Plate at 1:16 PM 4 comments:

You followed Highly Subjective and Completely Arbitrary and I'll follow through with a free rack pack of 2015 Topps. 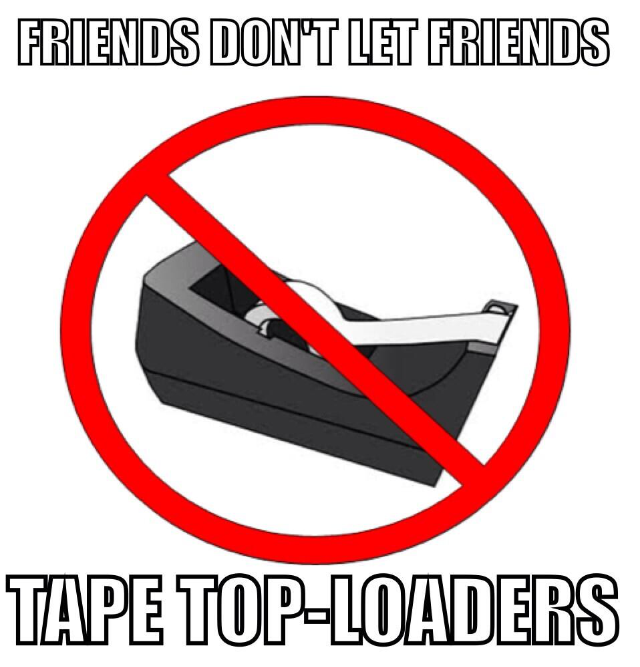 I just threw this in as a PSA, plus you can't see the winner without clicking the link!


The entries were tabulated, all 28 of them were randomized and the winner is...

Congrats to our winner and I'll get your prize out to you ASAP.

Forgive the stupid title of this post.  My doctor told me I'm pre-diabetic some time back and I'm doing Weight Watchers to try to lose some weight.  I'm down 28 pounds so far and I really could go for a hamburger. 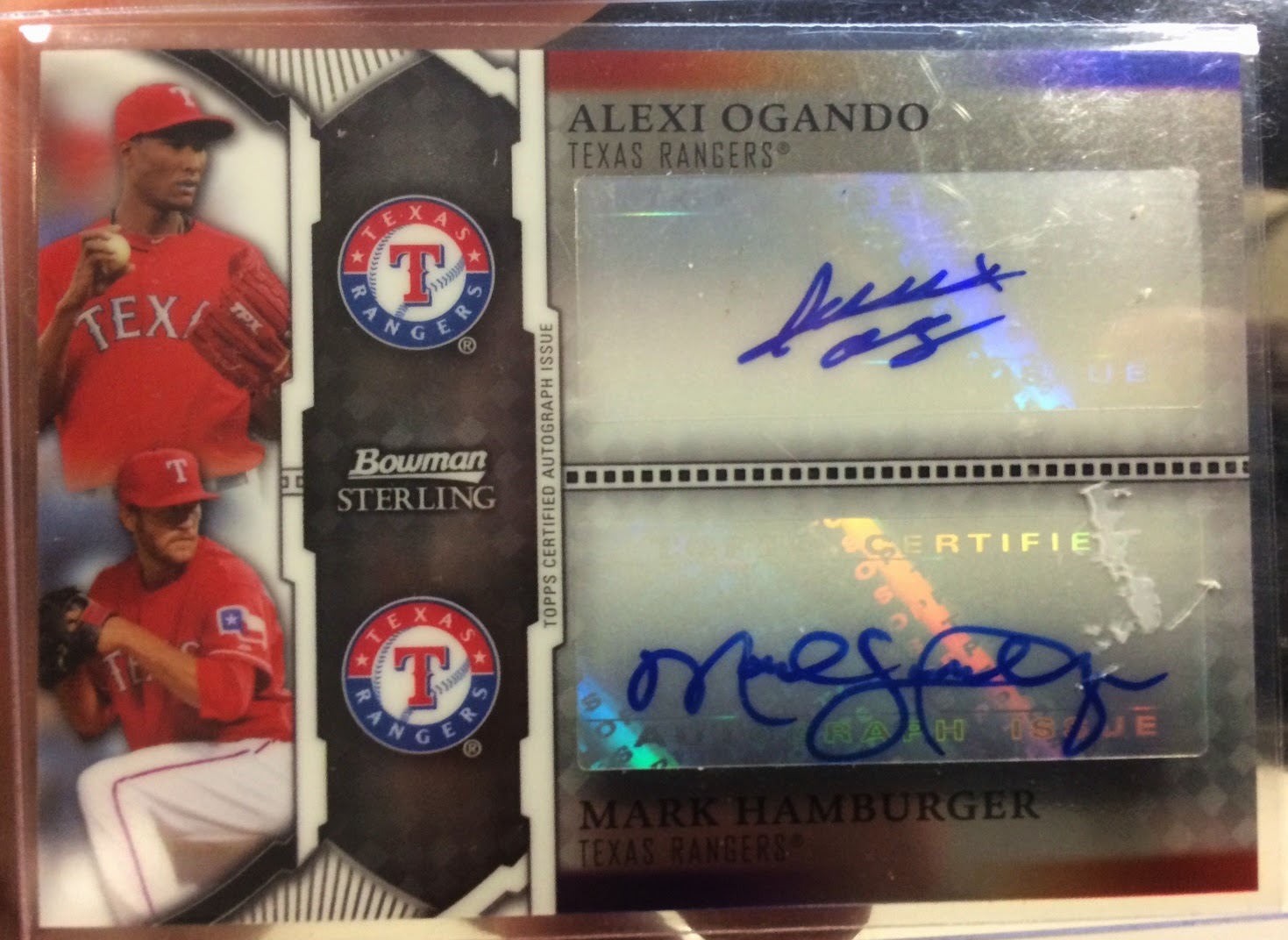 Since I can't have a real hamburger, I suppose I'll settle for a Mark Hamburger with a side of Ogando. This is a 2011 Bowman Sterling dual auto that I picked up in a recent splurge on Ebay. 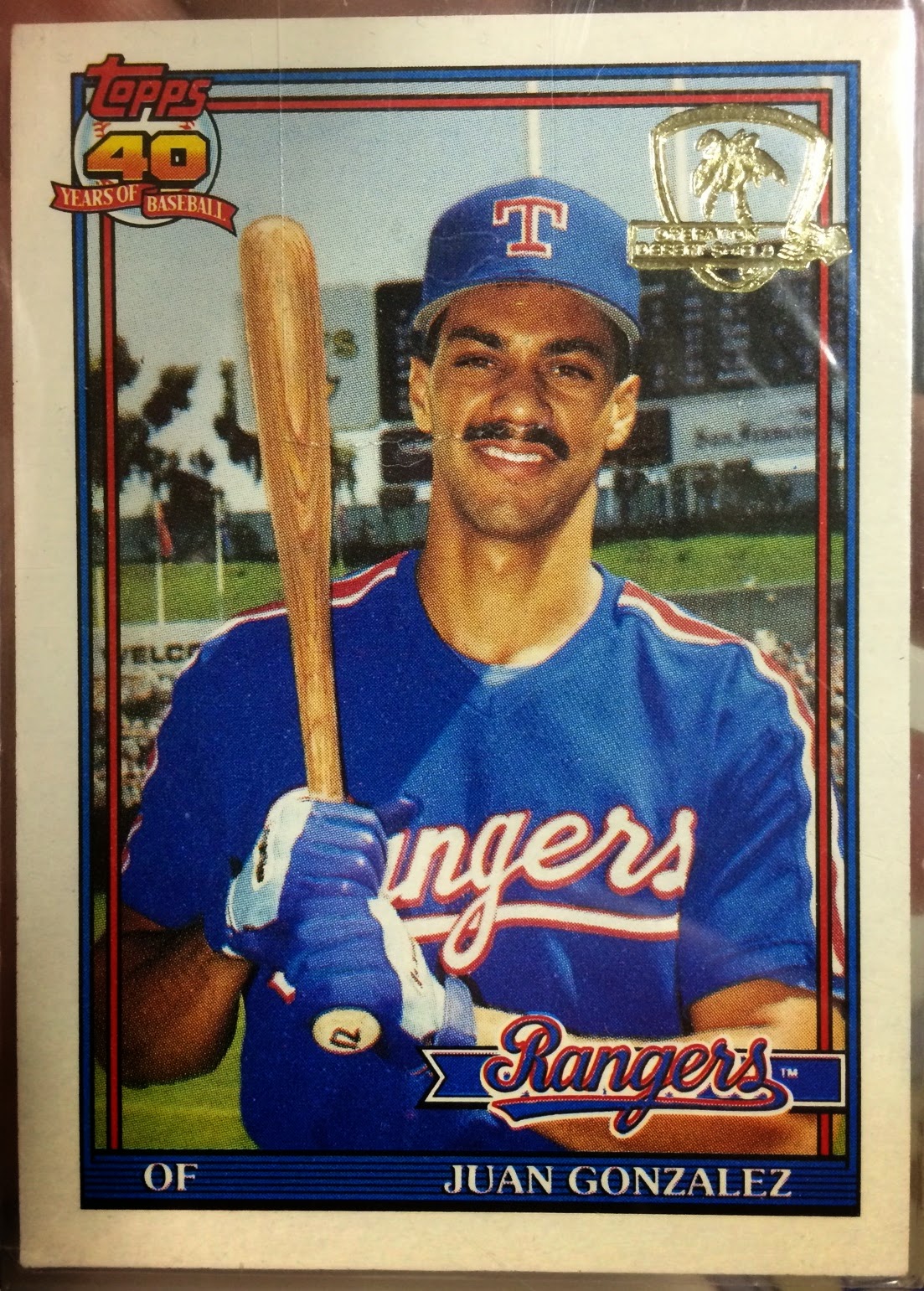 I do believe, although in my advancing age I may be mistaken, that this is my first 1991 Topps Desert Shield card.  I'd love to have a full set of these. 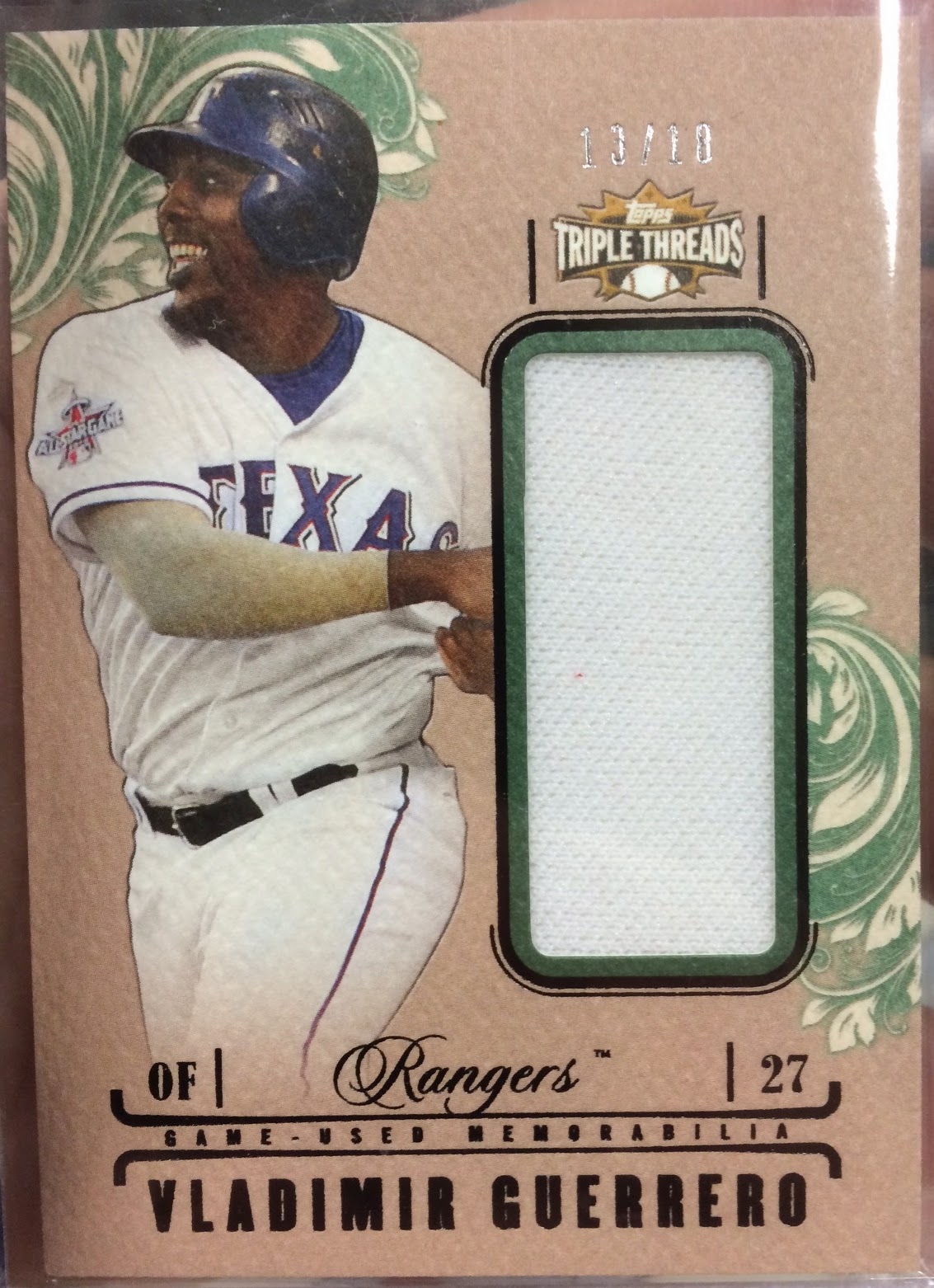 This was sort of an accidental purchase.  Still, it's Vladdy in a Rangers uniform AND it has a piece of cloth napkin relic!  Sweet!!! 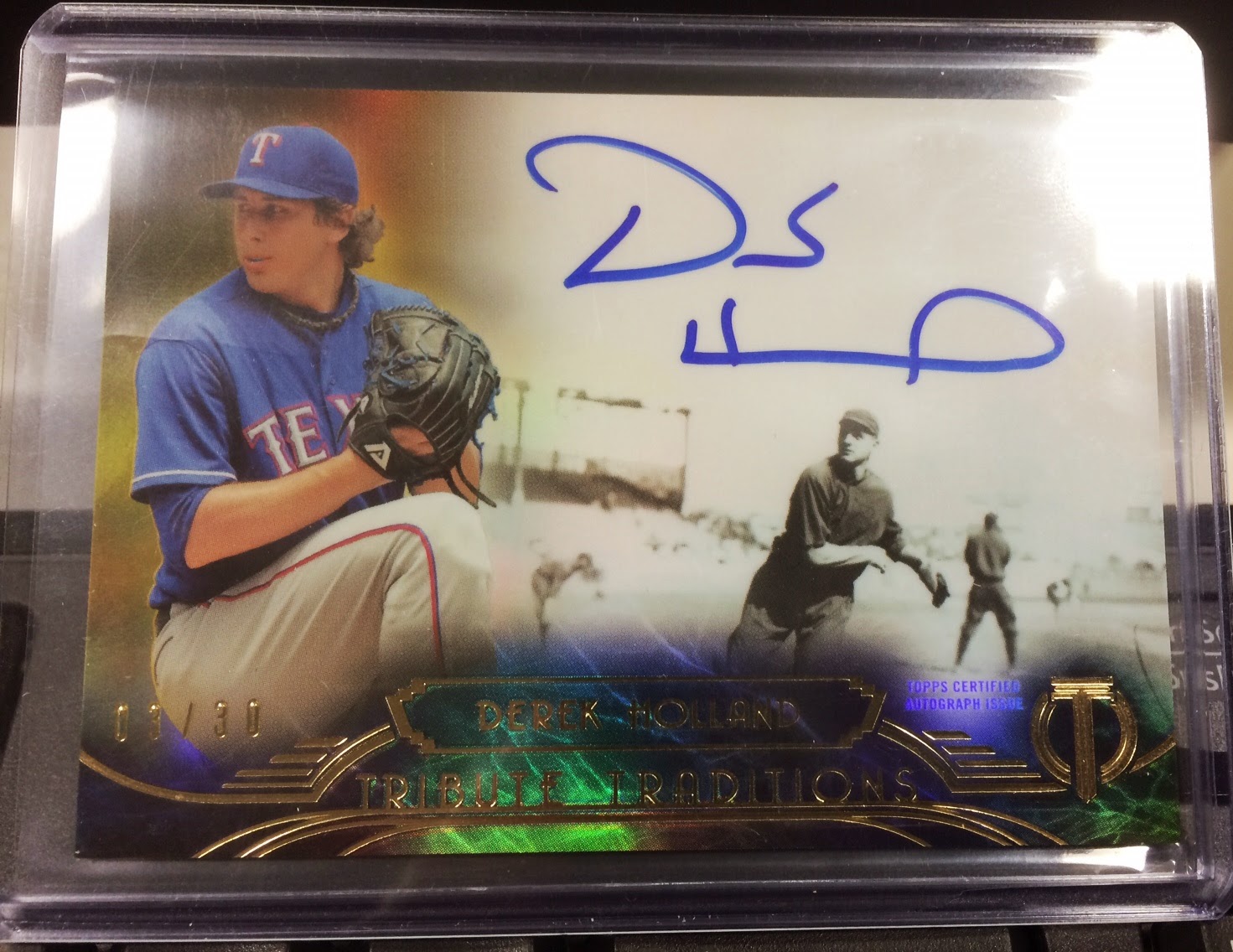 Here is another Tribute Derek Holland auto.  This one is #3/30.  I can't get enough of these Tribute autos. 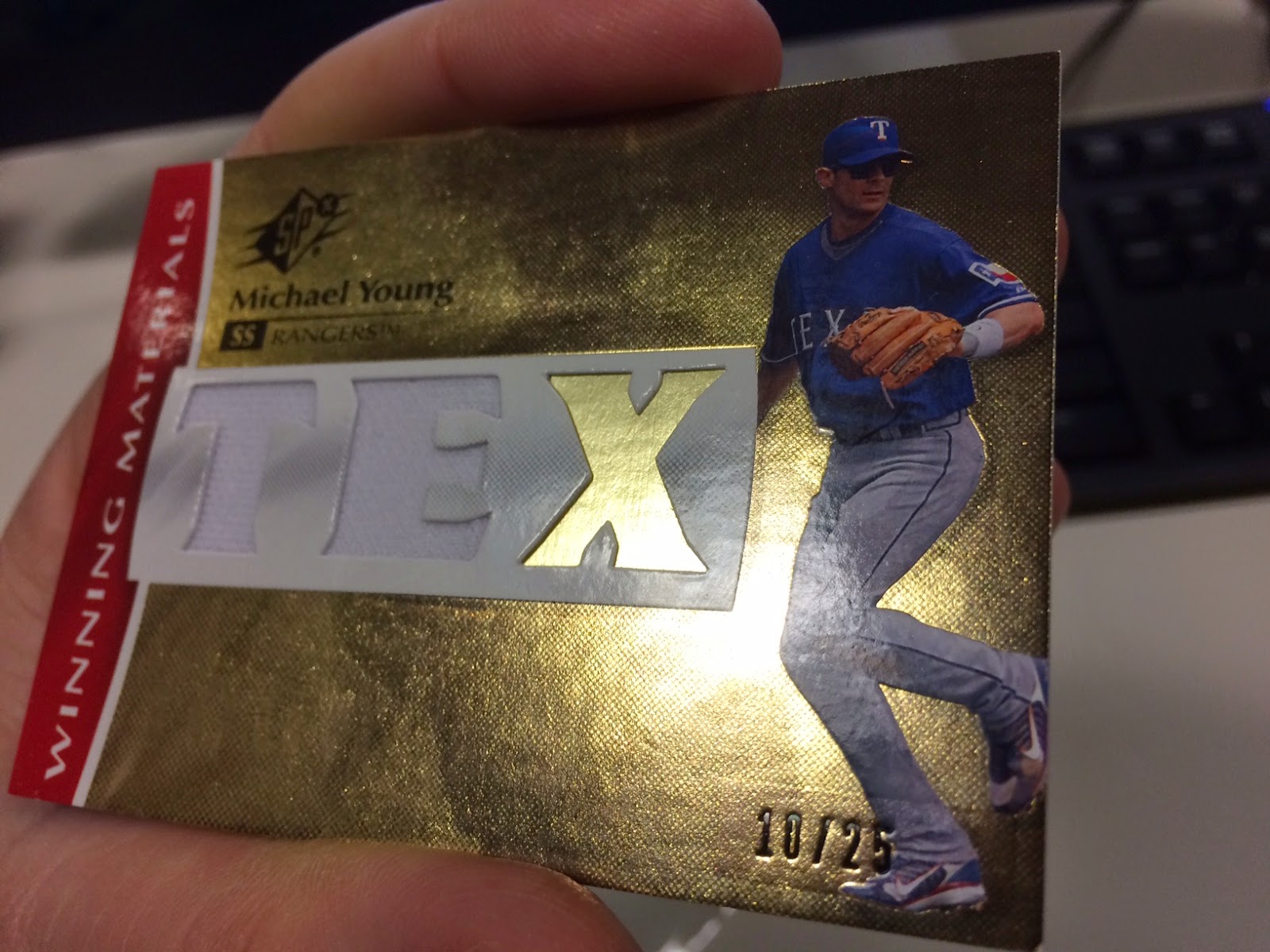 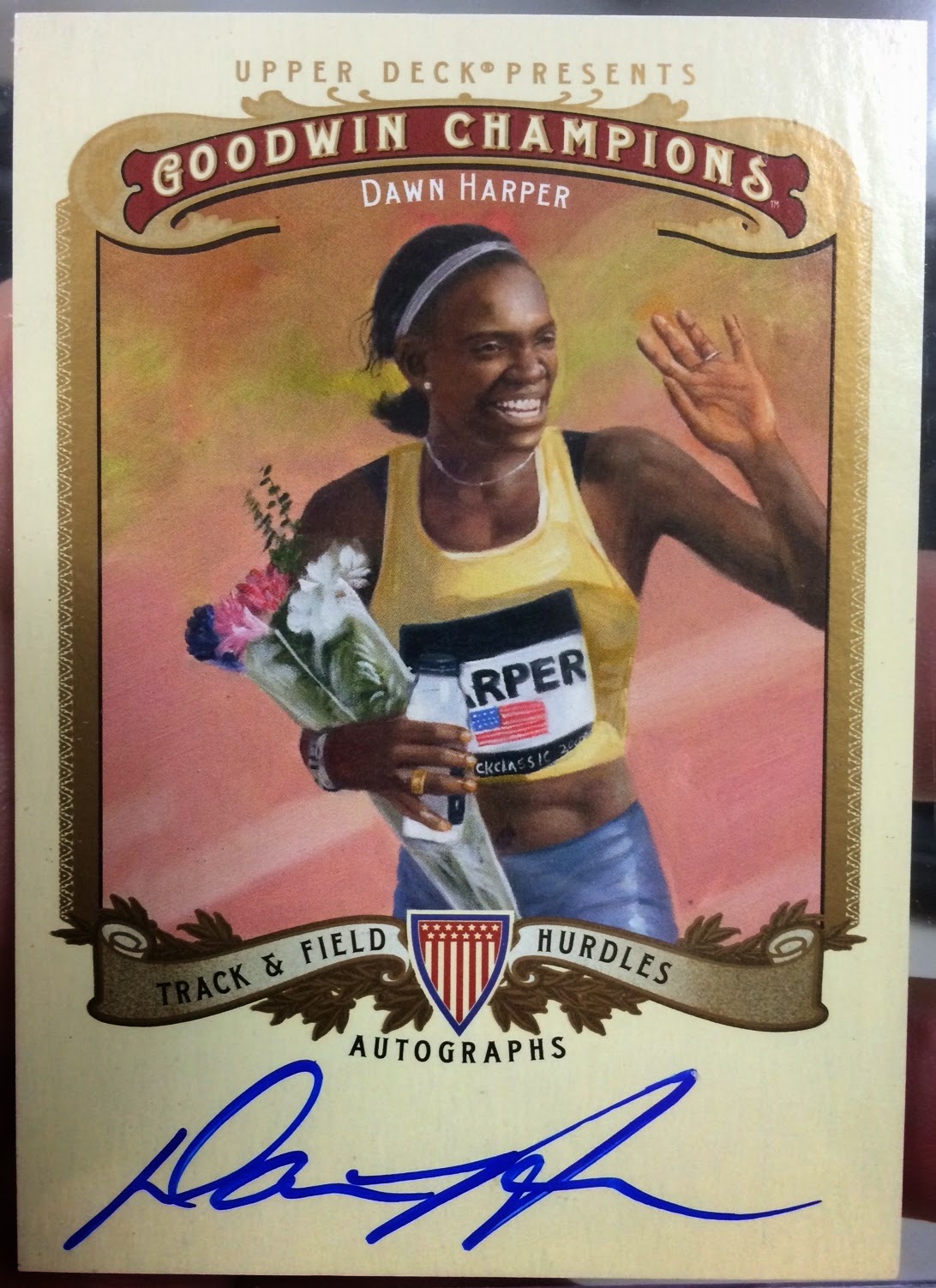 Back to my love for Team USA stuff.  I picked up this Dawn Harper auto for a whopping 99 cents. That's pretty nice for an Olympic gold and silver medal winner. 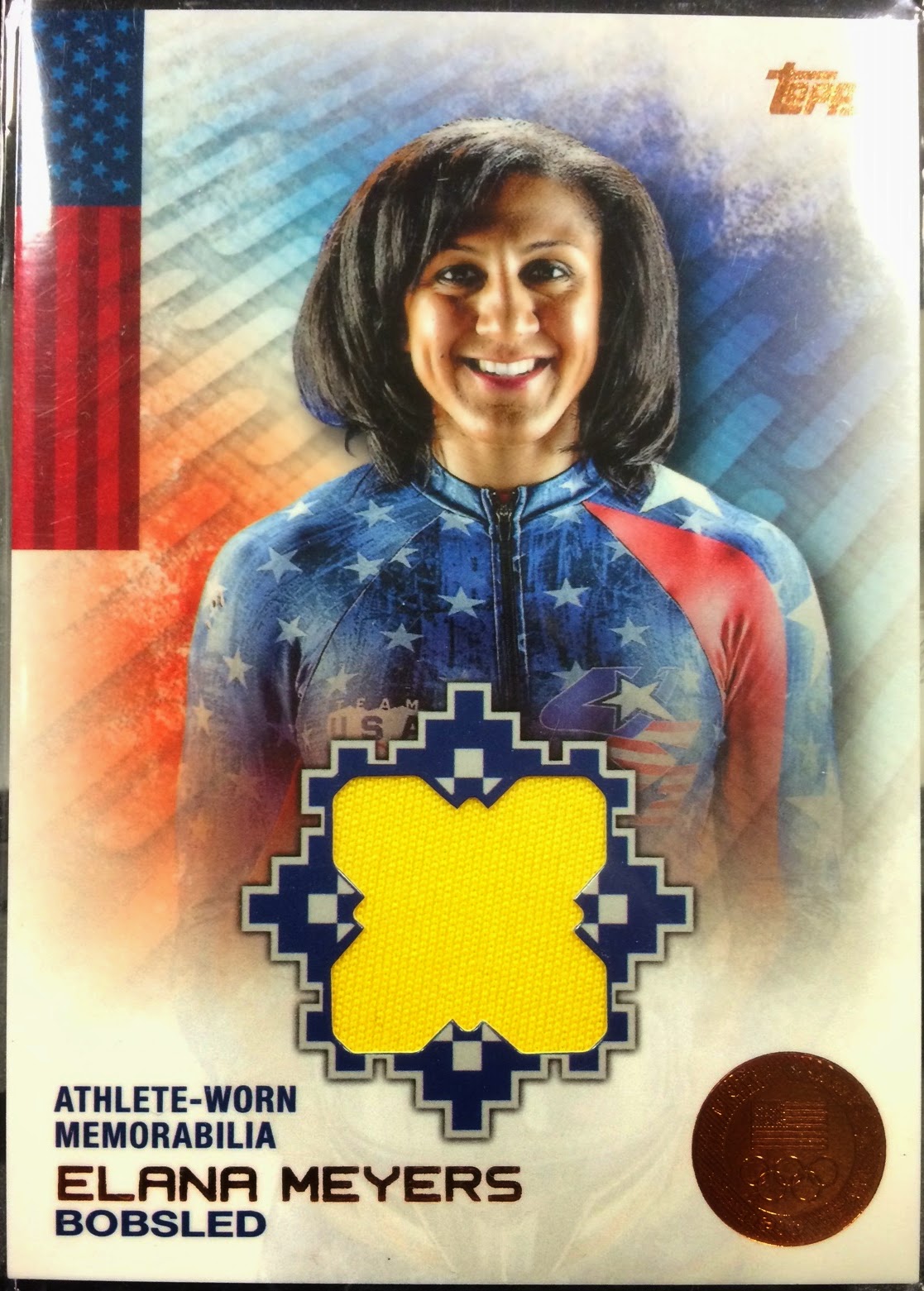 This bronze Elana Meyers relic set me back only a couple bucks. 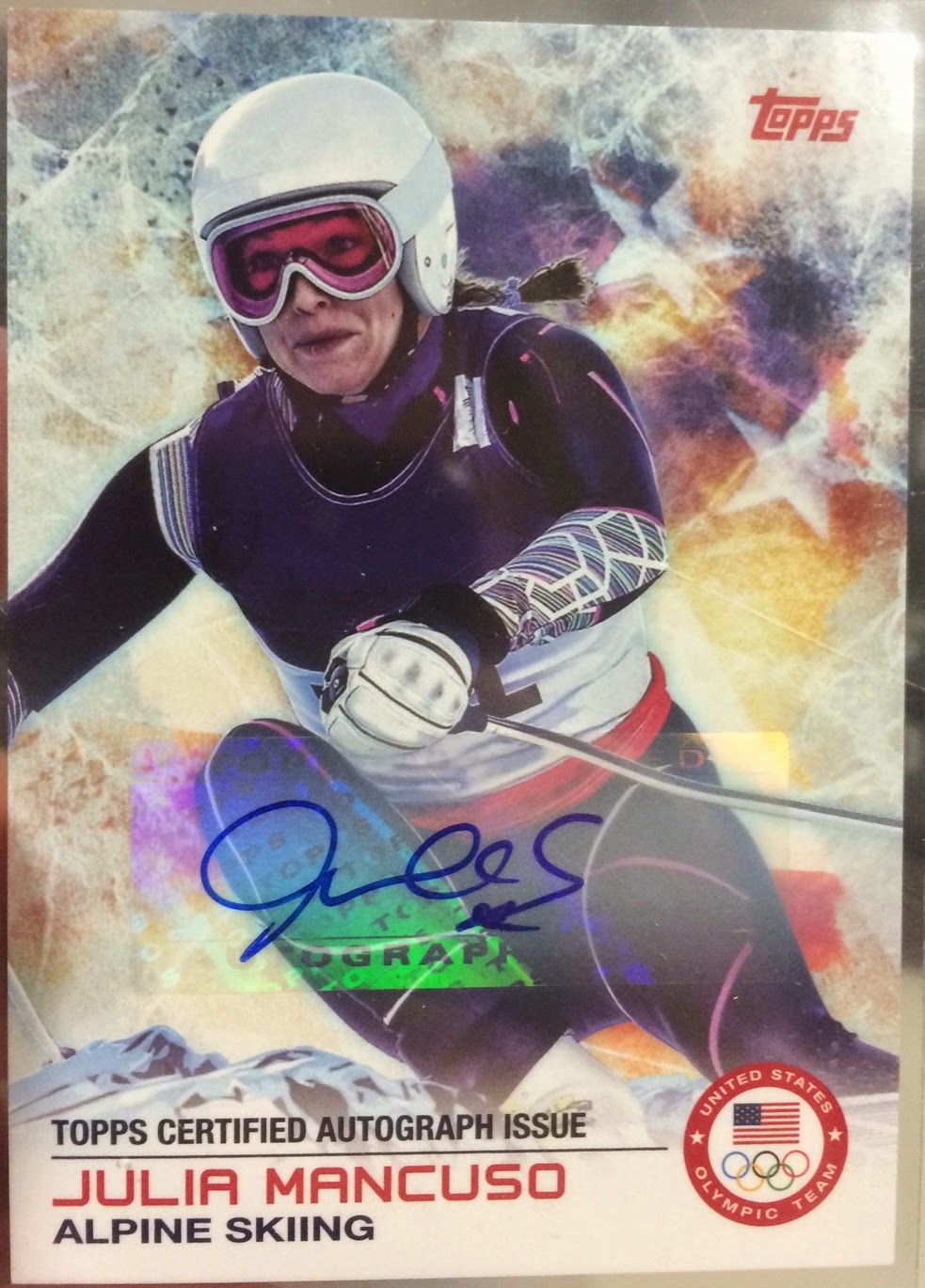 My disdain for sticker autos is well documented, but that's the only way to get these so I'll take it. Adding Julia Mancuso drops one more off the want list.

I have a bunch more Ebay purchases to show off, but I'll stop for now.  Have a happy hump day!
Posted by Play at the Plate at 7:30 AM 7 comments:

Well, that may be a stretch, but it's still fun!  Kenny, aka Zippy Zappy can be found over at Cervin Torren Up Cards. 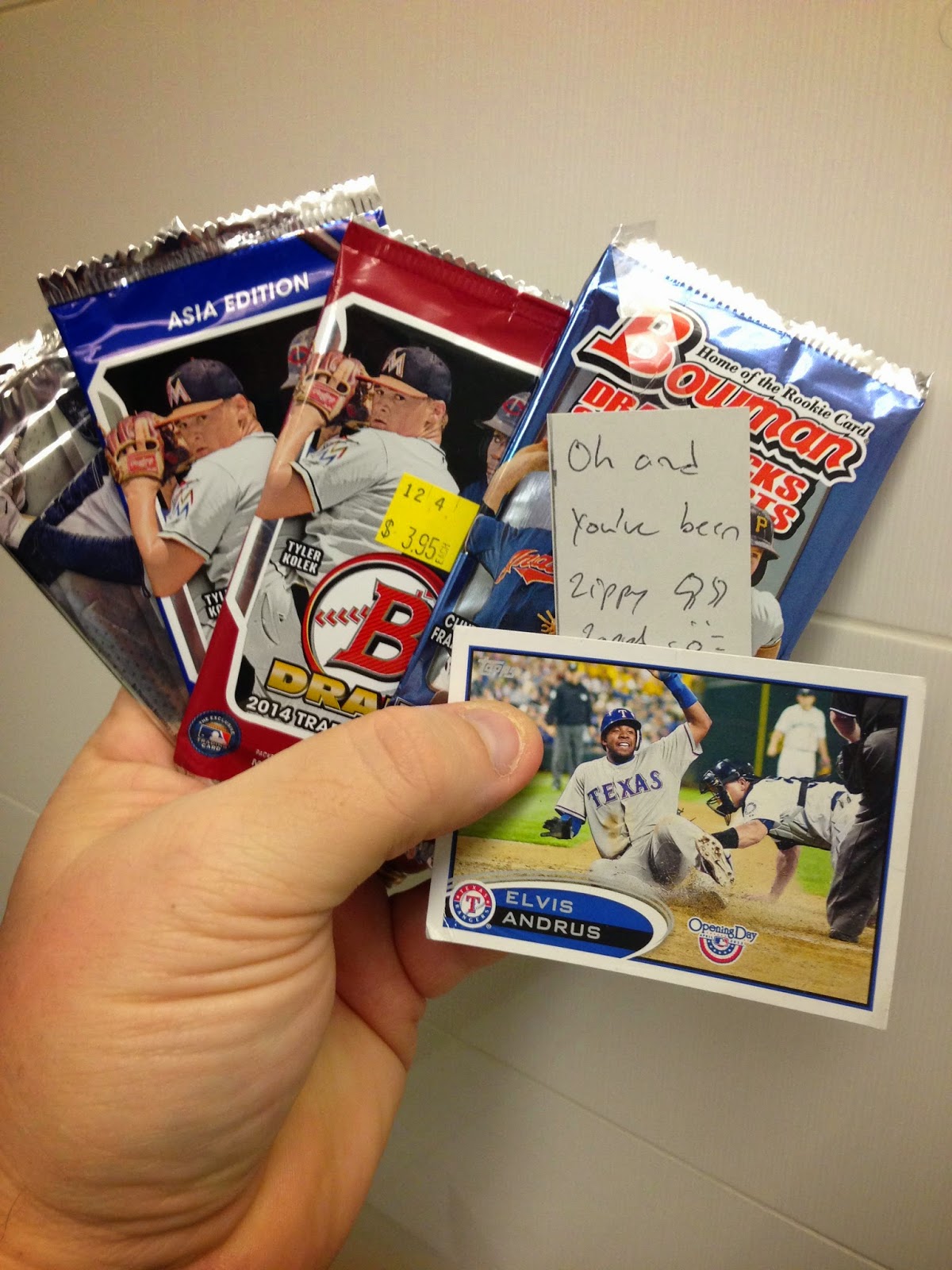 One of the nice things about Kenny's packages is that he sends them in wrappers. It's almost like opening a new pack of cards.  You'll notice that Wallet Elvis enjoyed the cards too. 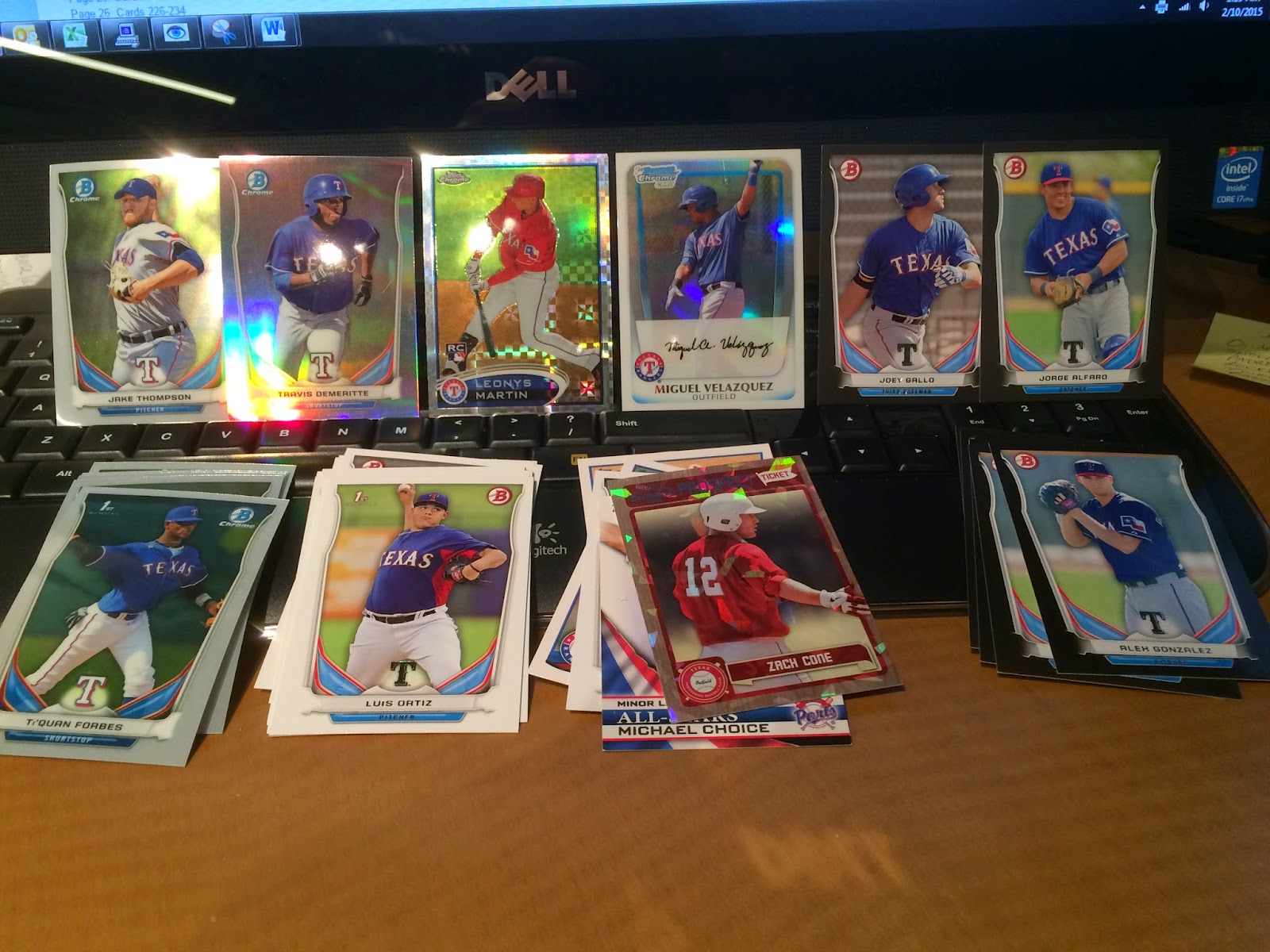 Without a scanner, I couldn't really do the package justice, but suffice to say, Bowman was well represented, including the Asia Edition black bordered cards on the far right.

Kenny, thank you so much for your generosity.  I'll be looking to repay your kindness in the near future!
Posted by Play at the Plate at 5:30 PM 1 comment:

If you've been blogging less than a year, you have to check this out!

If you're fairly new to blogging, you might not know about the blog I am Joe Collector.

He posted last night for the first time in over a year.  You won't believe his collection of Upper Deck Masterpieces.

Check him out and help him with his new quest.
Posted by Play at the Plate at 7:00 AM 3 comments:

I pulled a gimmick card from a repack

The very word brings to mind something that seems interesting, but a little shady at the same time.

Gimmick is defined as a trick or device intended to attract attention, publicity, or business.  There are gimmicks all over the place in our modern world.

Nabisco uses gimmicks to sell more Oreos.  Banana Split Oreos.  Cookie Dough Oreos.  Watermelon Oreos.  Halloween Oreos.  They trick up the standard Oreo (a favorite by the way) to draw attention to the brand and get people to try something new and unusual. 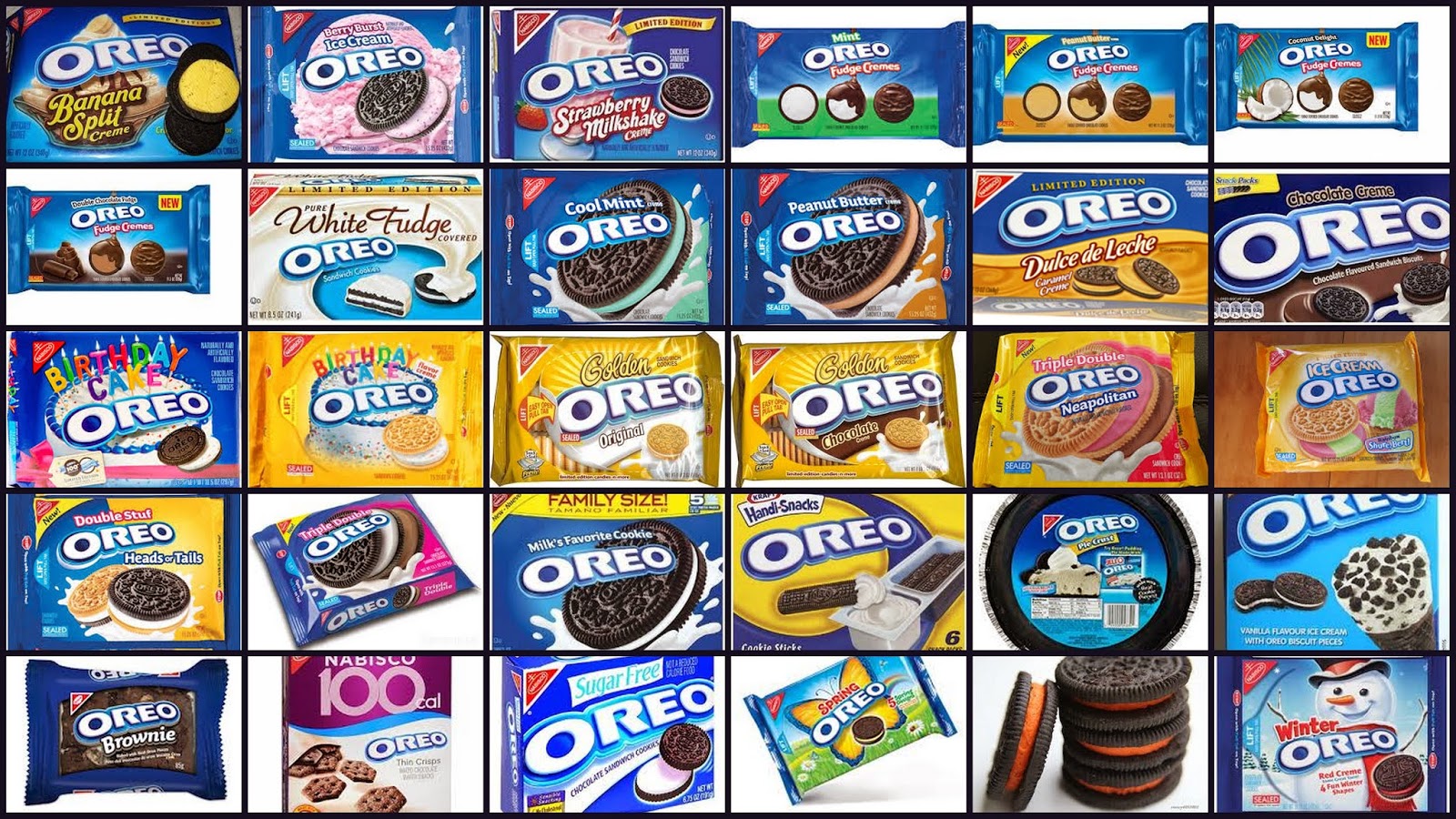 Love it or hate it, companies use gimmicks because they work.  They drive sales.  People who like Oreos are going to buy Oreos.  People who are on the fence DO try Oreos with wacky flavors.  If they didn't, Nabisco wouldn't be making them.  People do buy 2 for $3 when they only need one because it SEEMS like a good deal.

In the sports card world, gimmicks are getting more and more “common”.  The reason you see more gimmicks is because they drives sales.  I believe Topps is concerned about ALL SALES.  They want the little guy to buy a hobby box or a blaster.  They need that business.  However, those little sales aren’t what drives them to use gimmicks.  If we could all put together a set too easy, it would kill sales.  The use of gimmicks like photo variations, sparkle variations, serial numbered parallels and yes, autographs and relics, is what drives the repeat sales.  It’s what gets one guy to bust over 50 cases because he can sell all the gimmick cards.  No one is busting cases because they want to sort thousands and thousands of base cards into complete sets or team sets.  They do that too, but they are doing it to sell the big gimmick cards.

I don’t hate gimmick cards.  I understand them.  I know why Topps is making them.  It’s not about the integrity of the hobby or keeping with the tradition of making amazing products like 1956 Topps (one of my all-time favorites).  It’s about driving sales.  Big case breakers and even group breakers are driving the hobby and it is what it is.  I can’t fathom the idea, but many case breakers don’t even ship base cards, so the popular song, All about that Base (pun intended), couldn't be farther from the truth.

Now, why did I write about gimmicks today?

It’s simple really.  Yesterday, in an attempt to feed my irrational need to find 2015 Topps Series 1 on the first day, I drove to four stores.  Two Walmarts and two Targets.  At the last Target, with nothing to show for my attempt, I settled on a Fairfield Repack.  It set me back $11.99 plus tax and had 10 packs inside.  I buy one of these every now and then if I’m looking at the card aisle and all I can find is football.  They are generally fun to open, but I haven’t had a ton of luck with them.  You have to know going in that you’re probably going to get a couple of decent packs, the ones you can see, and mostly filler to round it out.  Most of the ones I've bought lately have had a fair number of 2014 Topps Series 1, 2 and Update packs, which is fine since I didn't buy much of that last year. 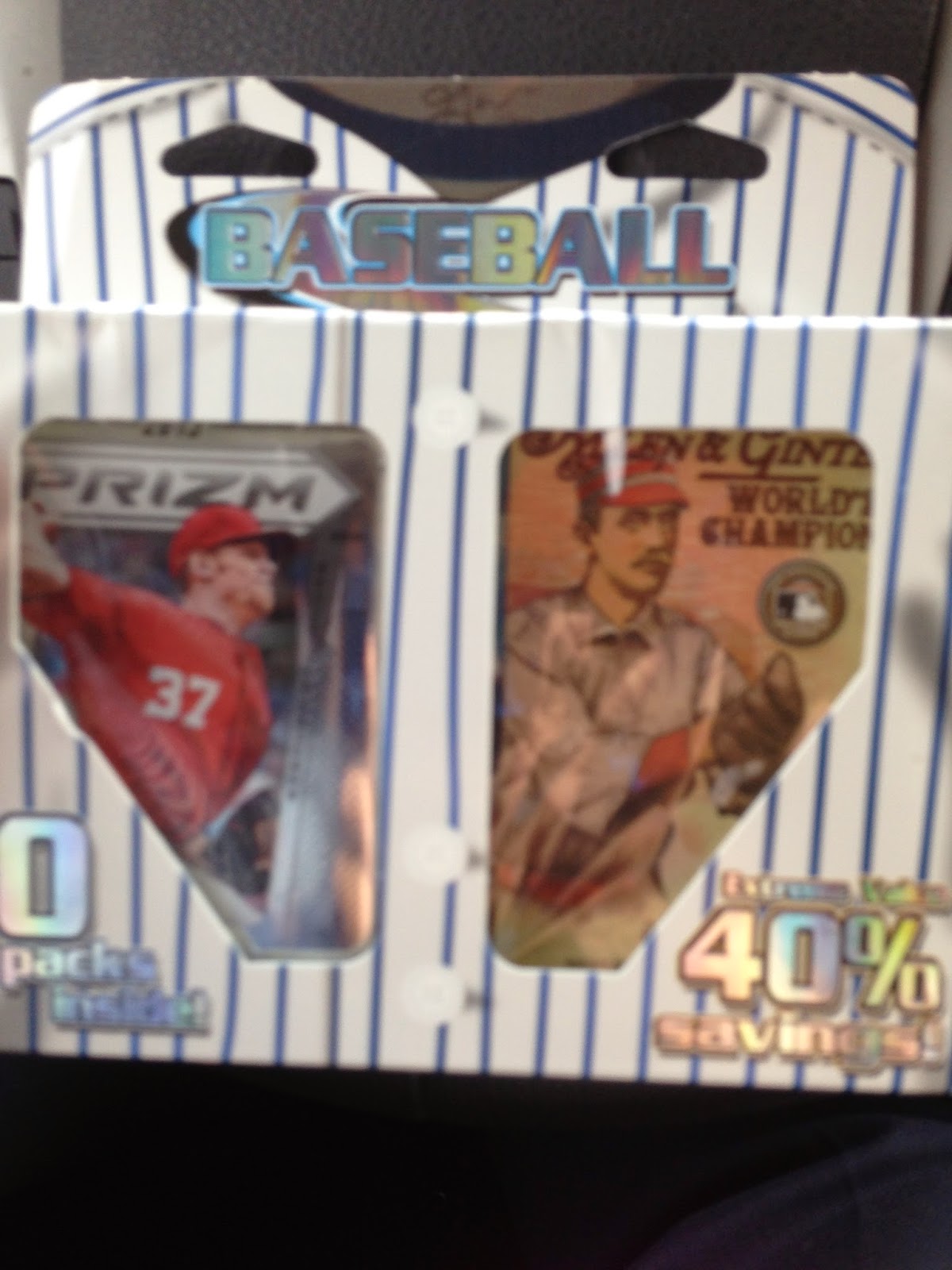 This one had the following packs inside (I've listed the best card from each pack too): 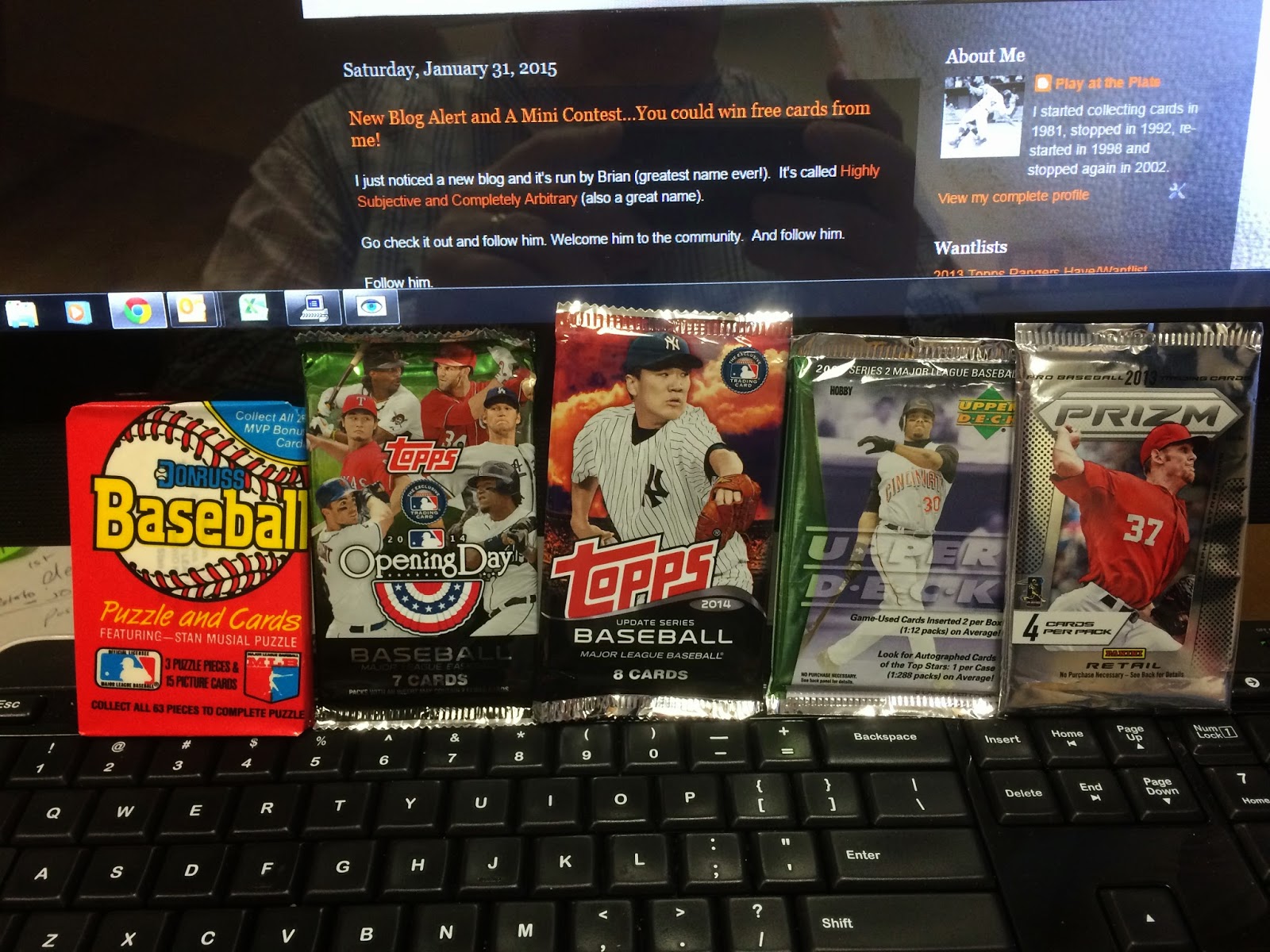 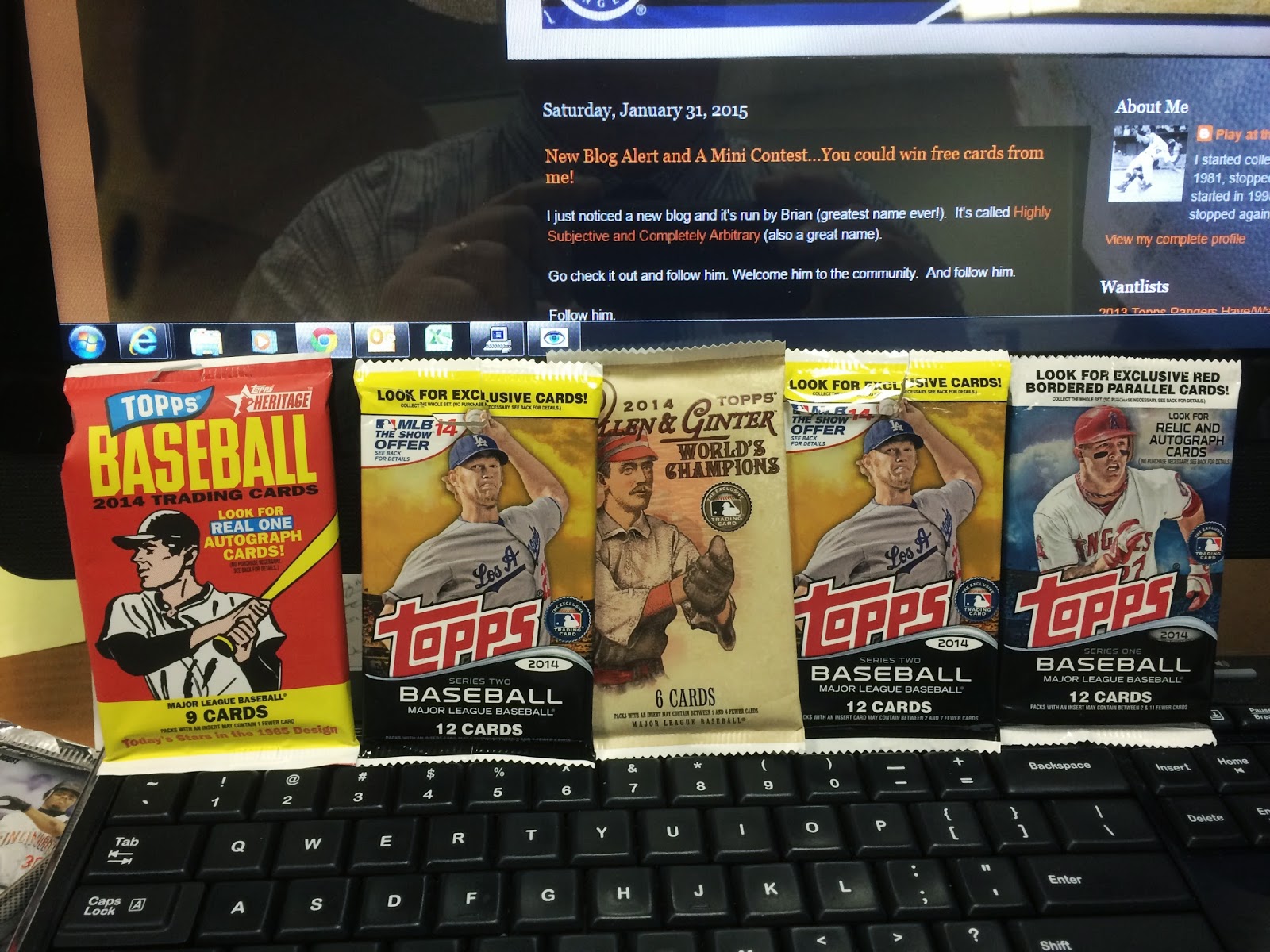 Oddly enough, the Mauer is my favorite card of the bunch, with the exception of the “gimmick” card I pulled from the 2014 Series 2 pack.  I won’t withhold it any longer. 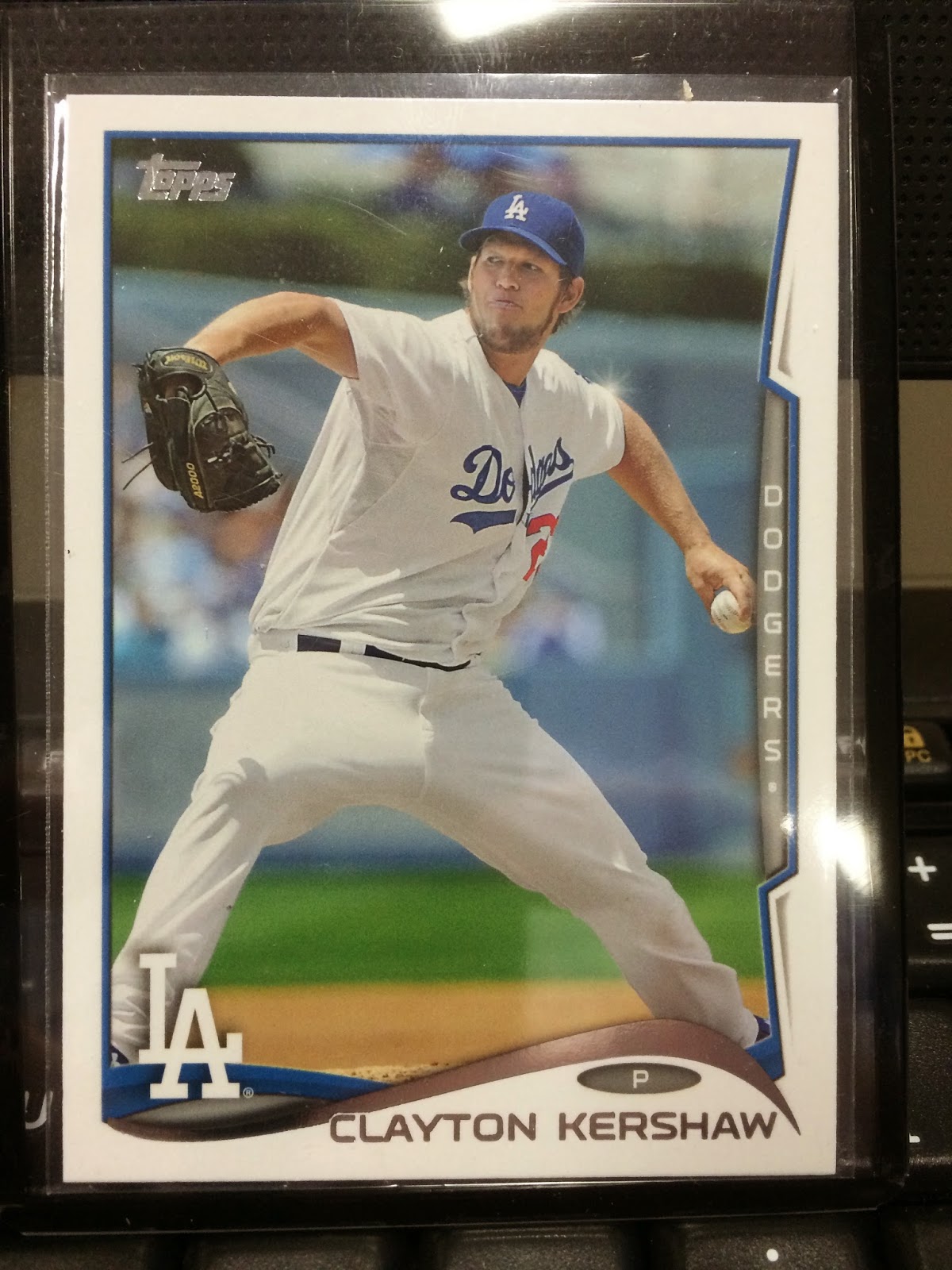 How about a case hit in a repack?  Now that’s a gimmick I can enjoy. 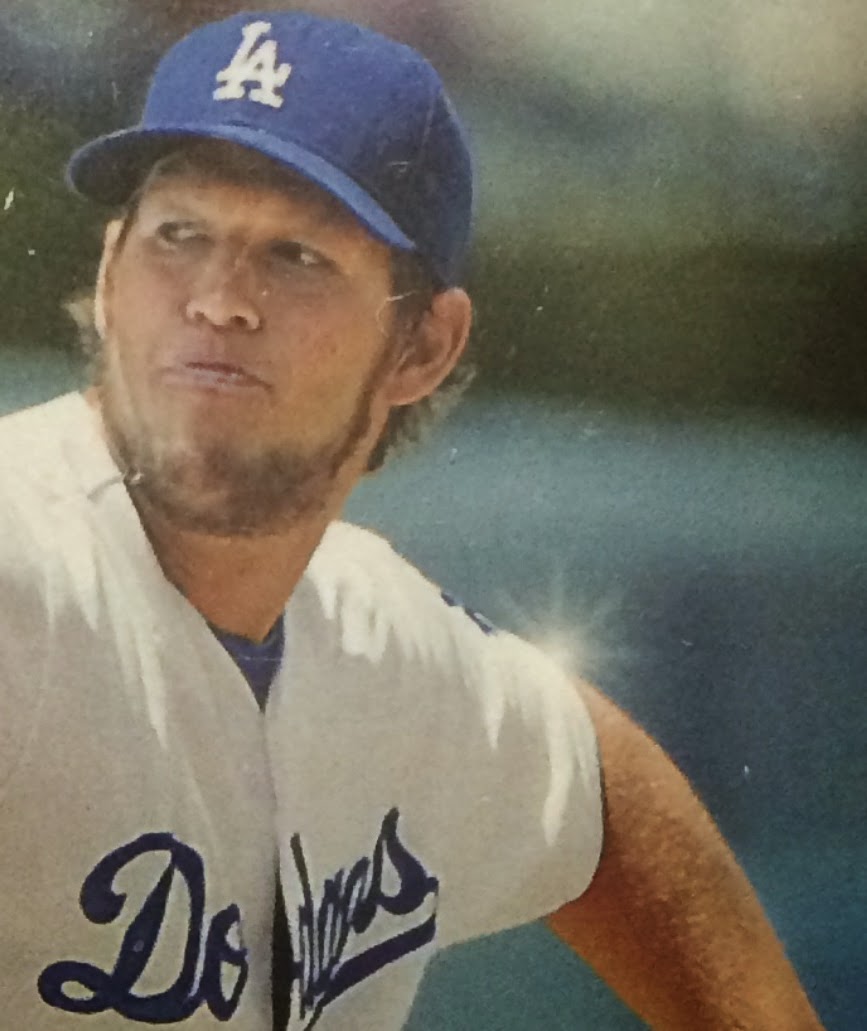