Better late than never...or is it?

I finally found a blaster of the latest and greatest Ginter at my local big box store.  Or should I call it a little box store since the size of blasters seems to be getting smaller and smaller. 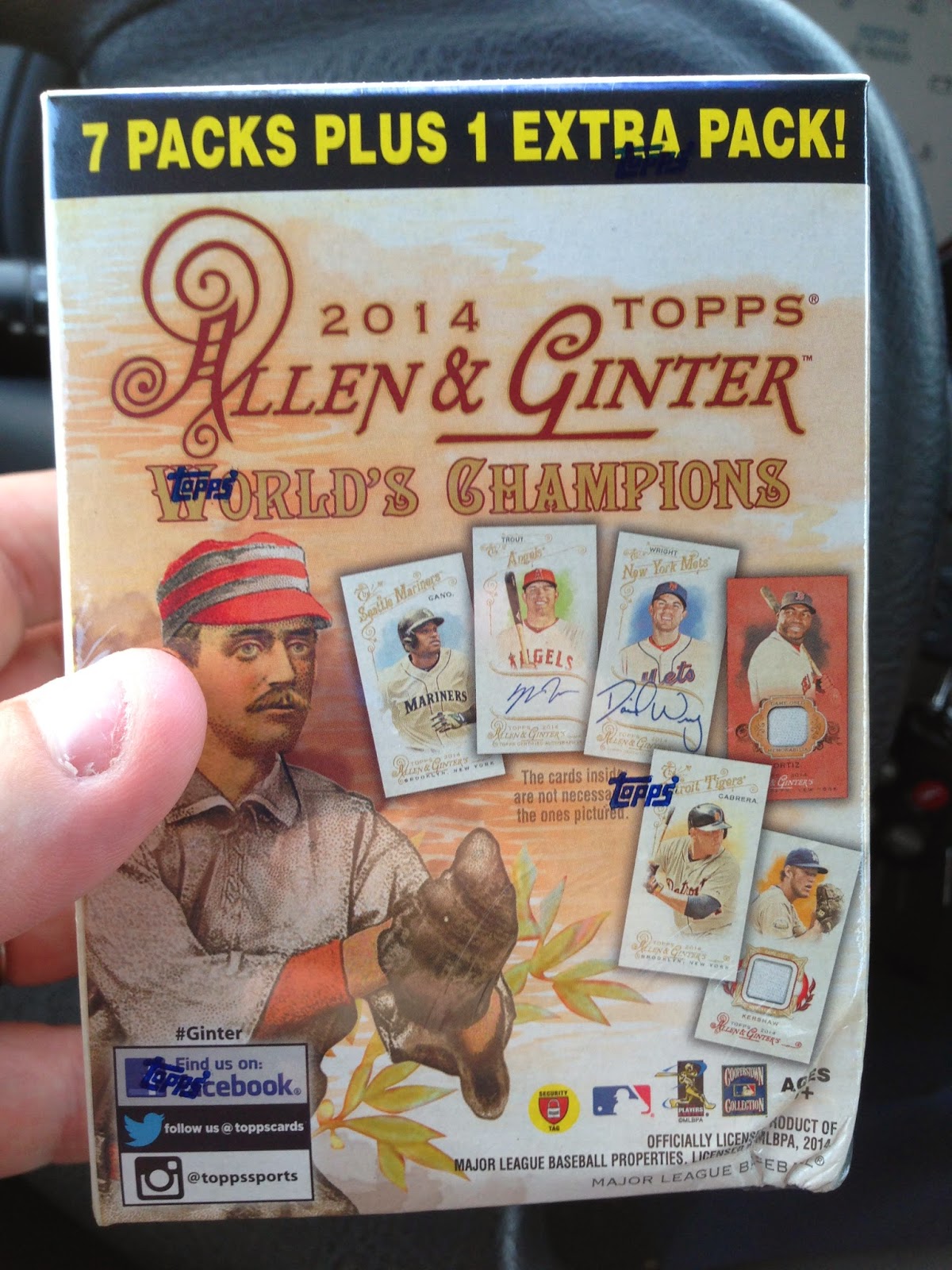 This was the last blaster on the shelf and as you can see it has a pretty significant ding on the bottom right corner.  Normally, this might be enough for me to pass up a box, but as it was the first, and only, one I've seen, I looked past the flaws and bought it anyway. 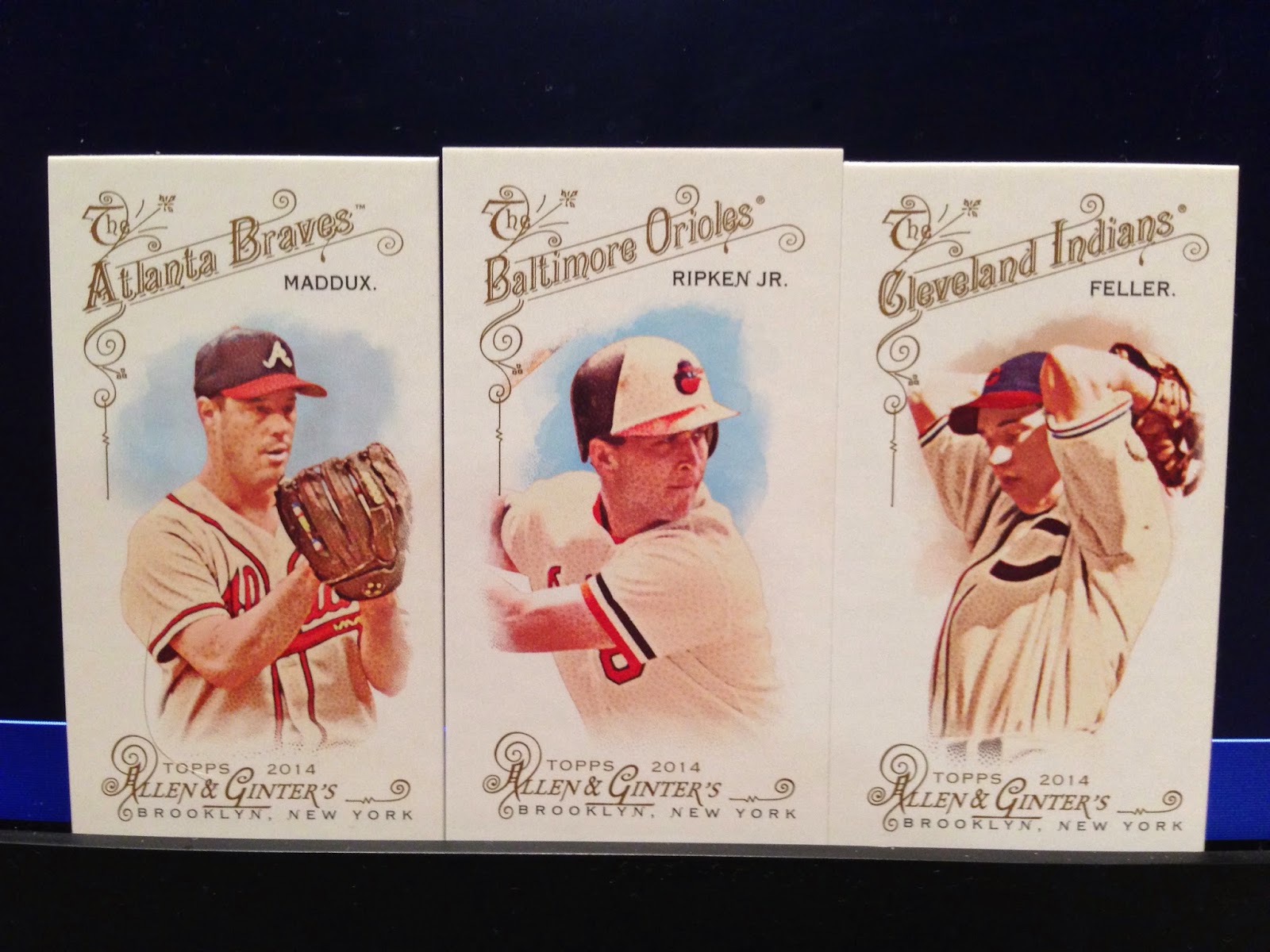 The first pack had a Greg Maddux mini so I was pleased.  I also found a mini Ripken and a mini Bob Feller. Not too shabby on qualtity. 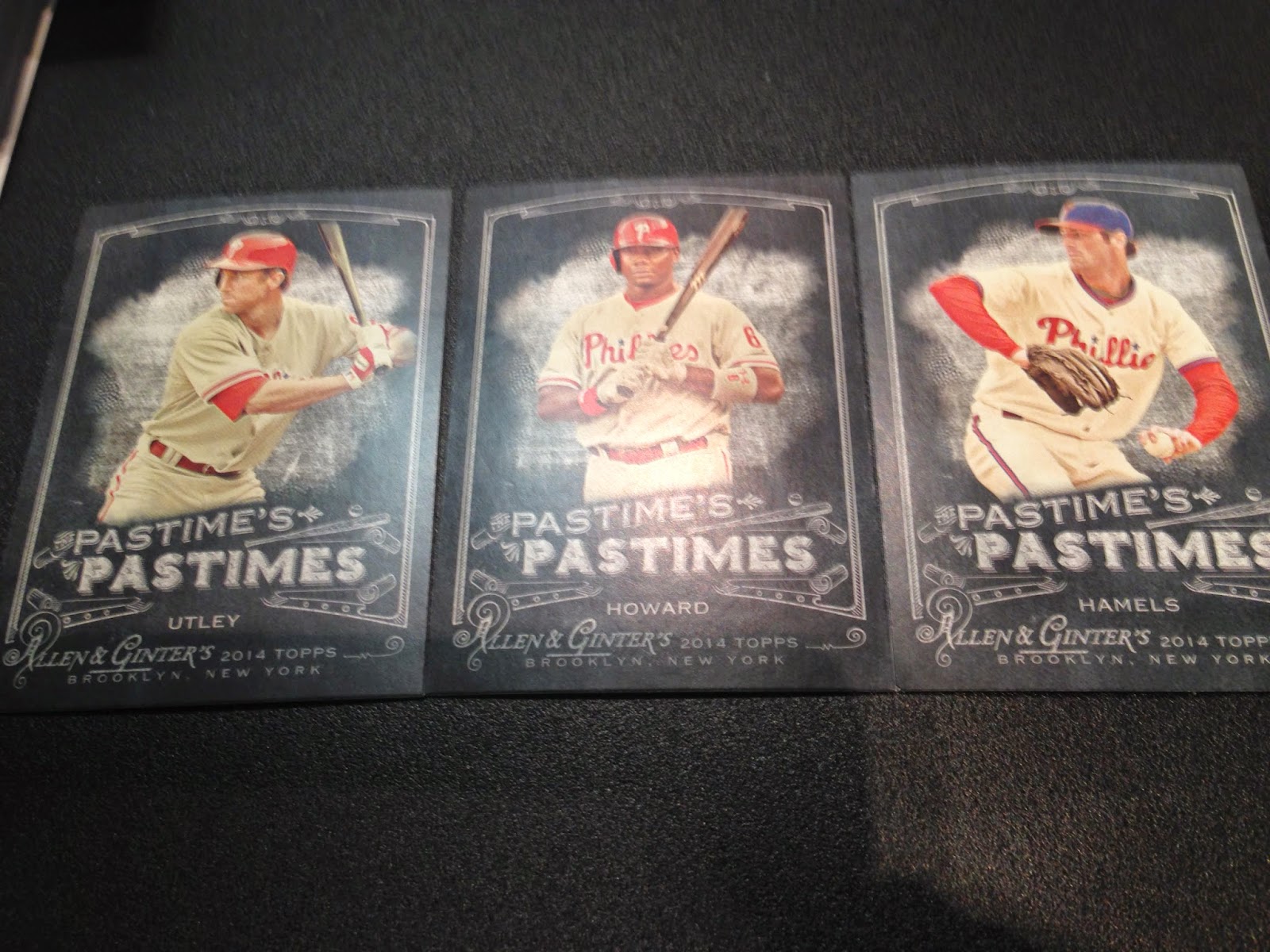 The 8 pack blaster also delivered 4 of the awkwardly named Pastime's Pastimes inserts, three of which depicted Phillies.  Yay me. 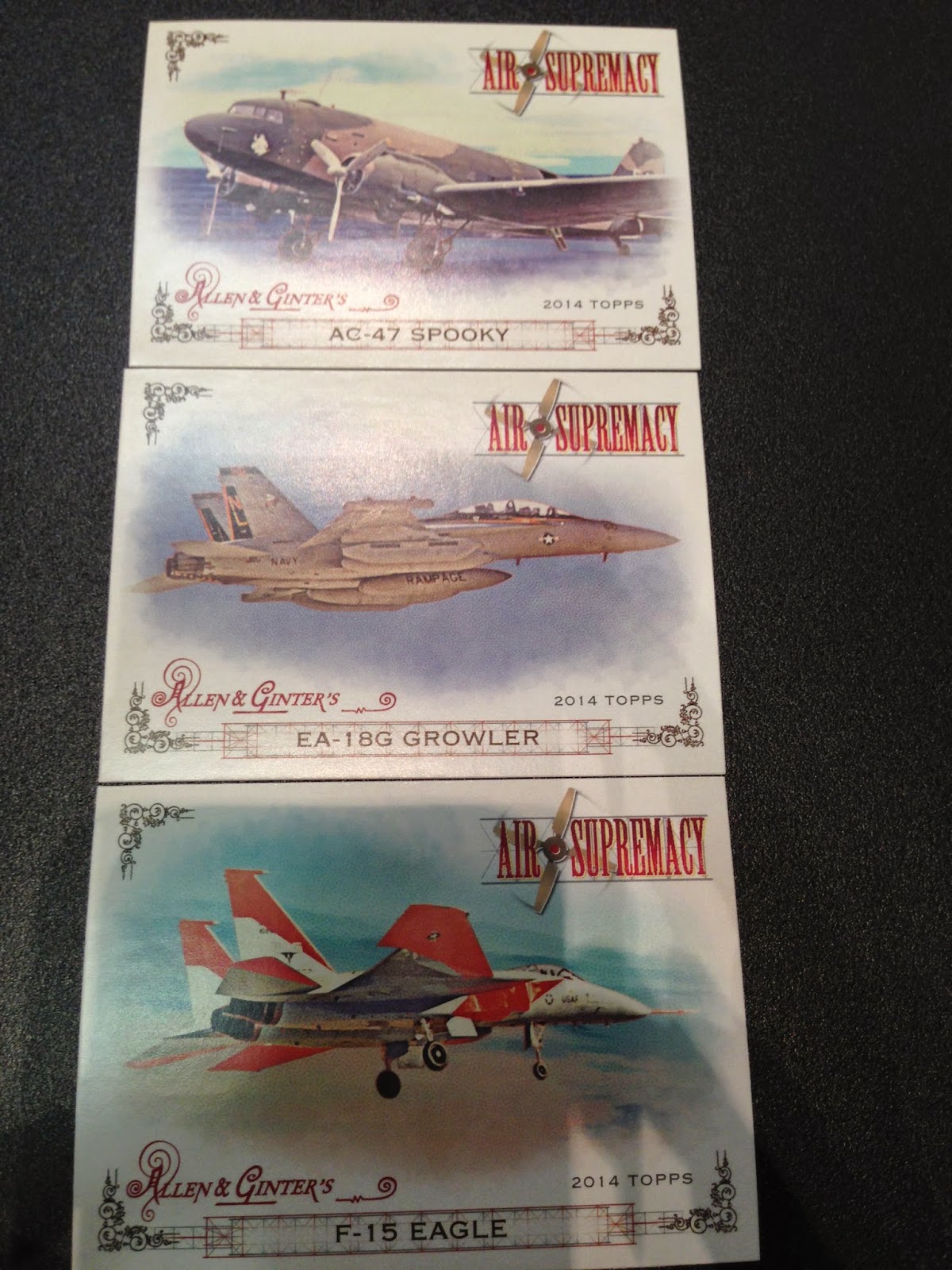 The one and only insert that I really like from this year's Ginter is the Air Supremacy set and I was fortunate enough to pull three of them out of 8 packs.  The AC-47 Spooky, EA-18G Growler and the F-15 Eagle.

I love opening cards because of the thrill of what you might get.  That said, I don't know if I'll open too much more of this just because I feel like it's throwing $20 down a rabbit hole every time I buy a blaster.

Of course, that's easy to say sitting at the computer at 4 in the morning.  Ask me how I did when I was on the card aisle with packs that are begging to be opened.
Posted by Play at the Plate at 7:30 AM 2 comments:


I've been pretty lax around the blog the last couple of months.  I'm trying to rectify that, but it's not easy with all this real life stuff going on.  I'll deal with that, but I wanted to do a little update of sorts.

1.  As much as I'll miss it, I'm not taking part in Gint-A-Cuffs this year.  I love Gint-A-Cuffs and Mark does an incredible job running it, but I've won a couple of times and just felt like sitting this one out.  I look forward to seeing everyone's 'Cuffs posts and hope you guys pull some great stuff.  If you happen to pull any Rangers you don't need, you know where I am.

2.  I haven't even seen a glimpse of a Ginter blaster or pack in my neck of the woods.  I do want to open a blaster, but until I do, I want to let the 'sphere know I'm primarily interested in the Air Supremacy set.  If anyone pulls a dupe or just doesn't want them, let me know and we'll work out a deal.

3.  I mailed out the first round of packages from the 5000 count box extravaganza and I hope to get a few more mailed out as the next couple of weeks roll by.  If you asked about cards, rest assured, they are sorted and ready to go when I get some postage money.

4.  I've got loads of cards to scan and show off and I'll be getting to those soon as well.  Thanks to all of you who have sent me cards recently.  I returned from vacation to a full box of packages.

Thanks for reading and sticking with me.
Posted by Play at the Plate at 5:30 PM 3 comments:

I've been on vacation for the last week, but it wasn't wasted.  I finally found the mythical Kangaroo Court. 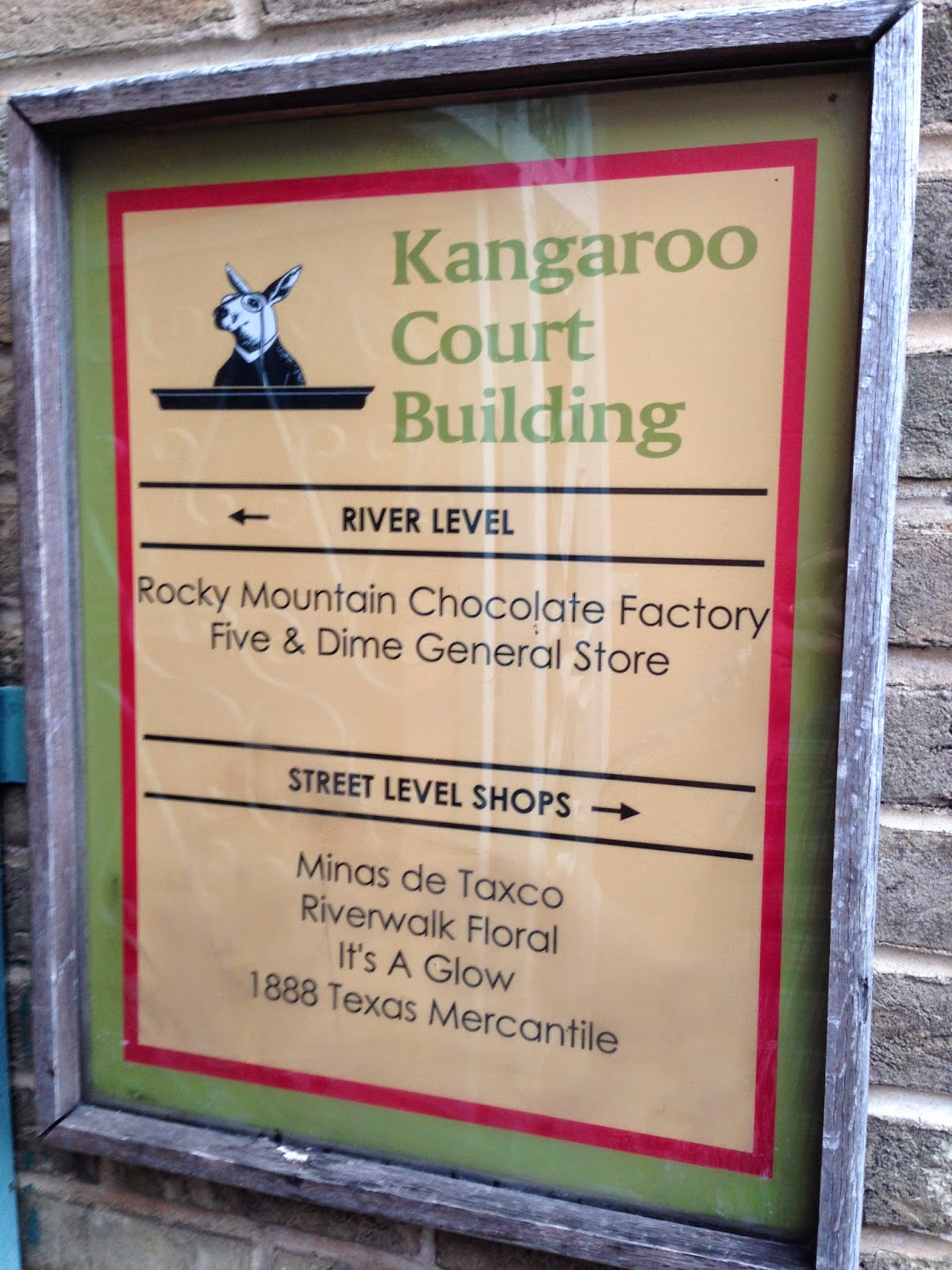 It's located on the famous San Antonio Riverwalk.  The Texas Rangers have been stinkin' up the A.L. lately so I propose they drag them all in there for a trial.  If I was the judge, I'd force them all to sign autographs with the opposite hand for the rest of the season.  Seems fair to me.

After losing 2 of 3 to Oakland over the weekend, the Rangers sit at 41-64.  That's puts them 24.5 games behind Oakland and gives them a nice winning percentage of .390.  In last night's game, Adrian Beltre hit the 391st home run of his career.

I'm just curious if the Rangers or Adrian can get to 400 before the end of the season.  I'd be happy to see either one at this point.

1.  The Rangers are terrible.

Don't get me wrong, I still love 'em.  I know a big reason they are doing so poorly is injuries.  Matt Harrison, Mitch Moreland, Jurickson Profar and Prince Fielder--done for the season.  Derek Holland--he's my favorite, but practically done for the season.  Seemingly everyone else that matters has had at least one stint on the DL.  They've already used 50 players this season and we have 67 games to go.

I know none of the Rangers read this, but just in case they run across it I want to say -- Keep your heads up and DON'T GET HURT!!

Some people say it's the curse of Nolan, but I don't believe it one bit.  Well, not much anyway. This is my newest addition, a Nolan Ryan Ginter box topper.


2.    I am SICK and TIRED of the Never Ending Celebration of All Things Derek Jeter*.  The endless reports of his round the league tour and gift ceremonies.  The 2014 All Star Game to Celebrate Derek Jeter sponsored by Brut for Men and Fox Sports.

I'm not trying to take away from Jeter's career.  I'm just tired of it and him and it's really not even his fault. He seems like a nice guy and may not even want all the attention.  I hope the Yankees don't make the playoffs because they will literally kill all of us with Jetermania.

*I'm fairly certain my rant against Jeter is partially, if not entirely, due to the fact that my Rangers are in the cellar and don't look to be getting much better this season.  Of course, it might also be due to my long-standing disdain for the Yankees.
Posted by Play at the Plate at 7:30 AM 9 comments:

The Rangers finally get home field for the World Series!!

Seriously though, the Rangers once sat at 35-35 and were "only" 7 games back.  Throw in a 3-22 run up to the All-Star break and you get a 38-57 record which leaves them 21 games out with the worst record in all of baseball.  The 3-22 stretch ties for the worst 25 game record in team history.  Ouch.  Tying or breaking team records is generally fun, but when the record is for futility, the fun is out the window.

My team may be in the toilet, but I still have my cards. 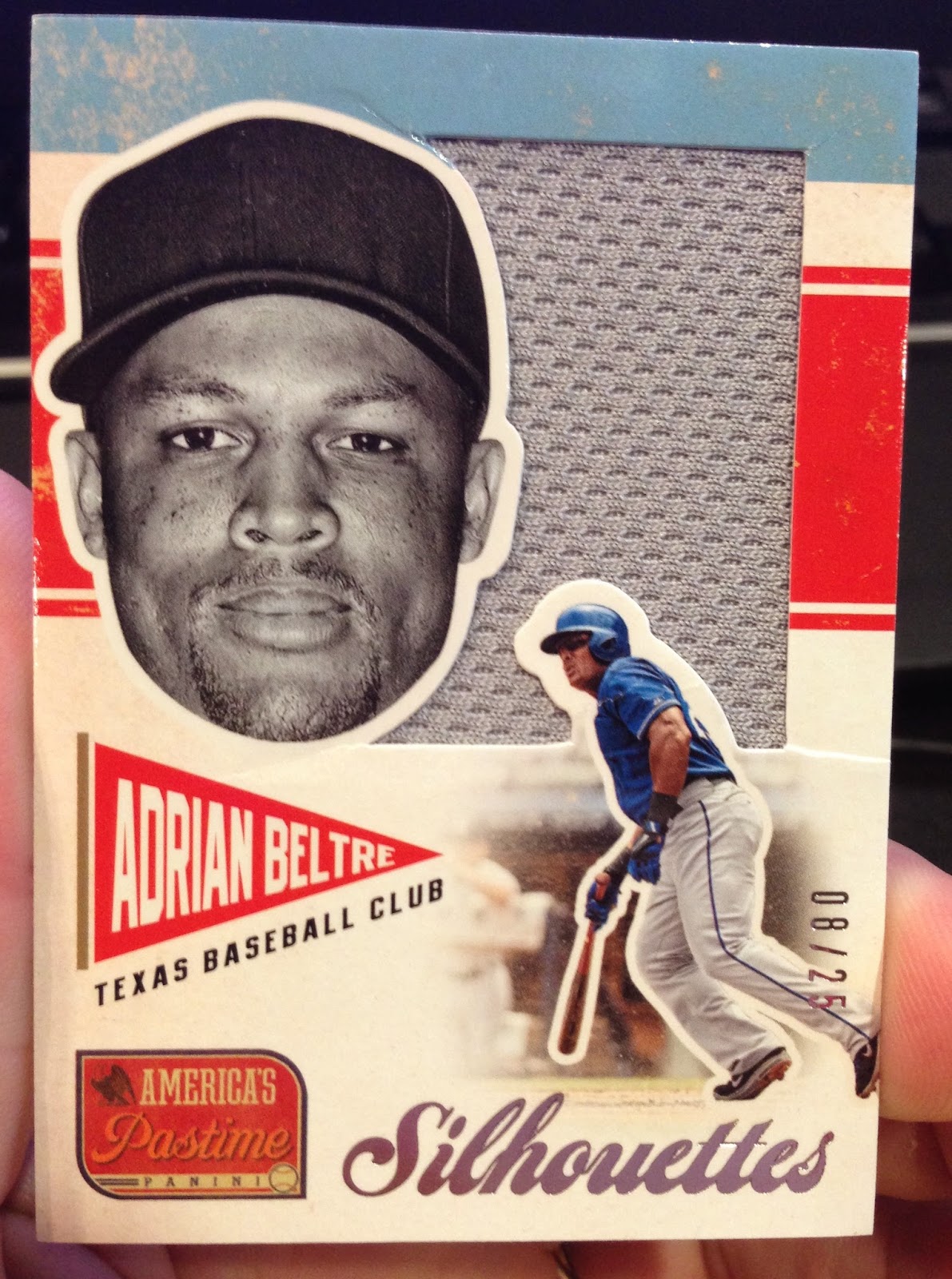 Even if they do make the players look like convicts.

It's official.  The Rangers are the worst team in baseball.  Does that mean we get the #1 draft pick?  Since we already own the rights to Russel Wilson, maybe we can draft Johnny Manziel next.

It's been a long time coming, but I finally found out I got the new job.  It's really a promotion, since I'll now be supervising my former co-workers.  That means I'll be primarily working days once my night shift position gets filled.  That will be a change for me after working deep nights for over 8 years.

That's not why you're reading this post though.  You want to know what next Tuesday will bring.

I'll finally be getting some of the long promised packages in the mail from all the 5000 count boxes I sorted.  I just packed up the boxes for Once A Cub, Mark Hoyle, Hiflew, Robert at $30 a Week, and Angels in Order.  I'll need to make a trip to the store to get some more boxes, but I should have more ready before the trip to the post office.  I'll also have packages for Nachos Grande, Night Owl, Mark Aubrey and some others that don't need a box.

I appreciate all of you being patient.  I hope you enjoy what the you get.  I think some of you that sent money for shipping sent more than you needed to so I'll put the extra back in the box for you.
Posted by Play at the Plate at 7:30 AM 9 comments:

This is a lost season for the Texas Rangers.  Considering it's been 11 days since I posted, you might think this blog is going down the same path.  Rest assured, I'm still here.  The Rangers poor season is part of my problem, but I'm going through that thing we call "real life" and it's distracting me like you wouldn't believe. Most of you have been there so you probably would believe it.

Back to my Rangers.  I was listening to them get destroyed by the mighty Astros on the radio as I drove to work last night and I heard some stunning stats.

Tonight, the Rangers will start Phil Irwin.  That's right, Phil WHO?  Phil will be the 46th player to appear for the Rangers this season.  They had 46 players make an appearance in 2013 and that includes the September call-ups.  In 2012, that number was 39 players.  You kind of get an idea how the season is going when you hear those numbers.

As hard as the Rangers are to watch and root for right now, I'm still collecting and surprisingly, the guy I'm after the most hasn't played an inning this year. 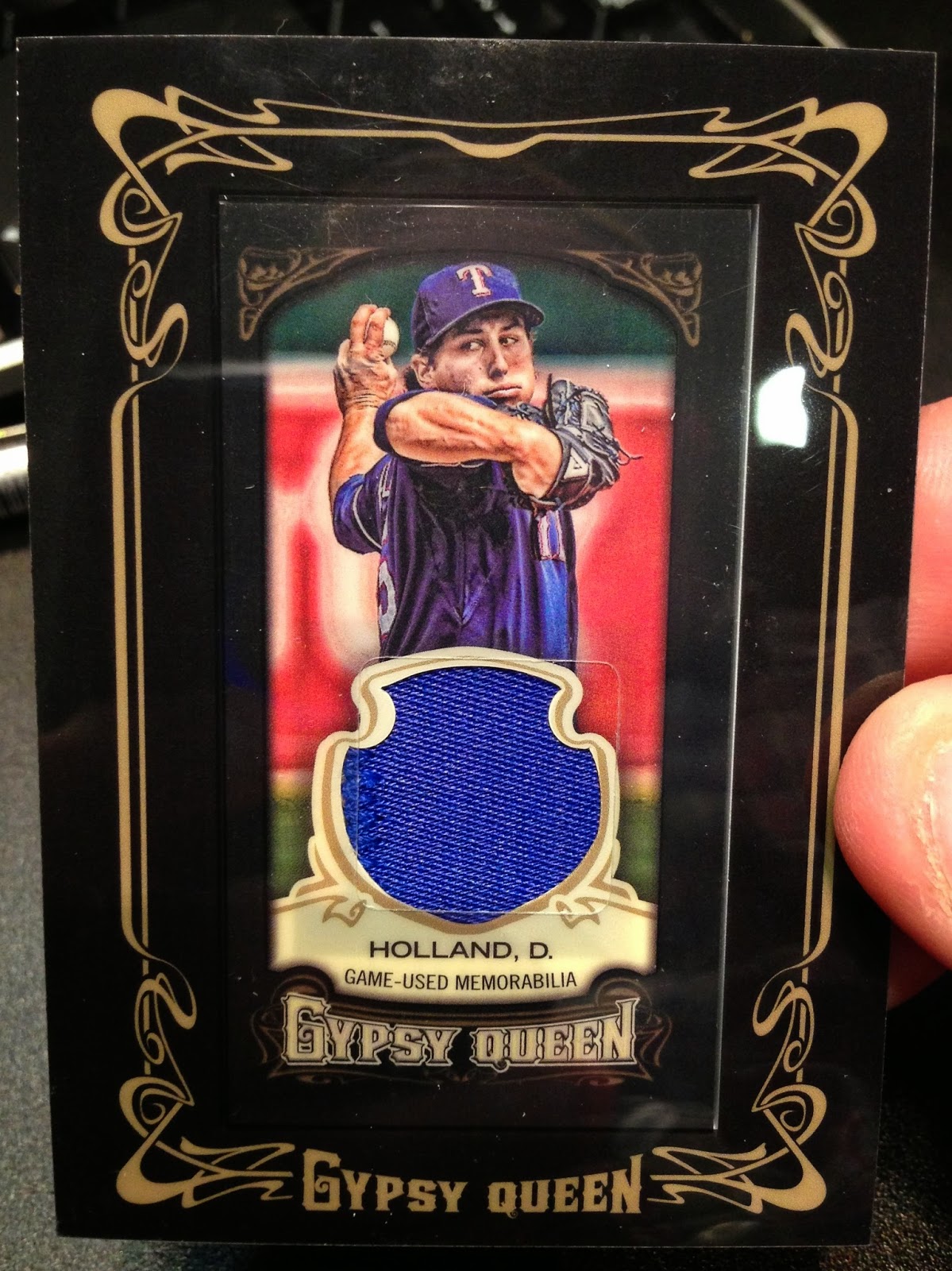 My most recent Derek Holland pickup is this 2014 Gypsy Queen mini patch #7/10.  It only cost me $3 and change and has a nice piece of blue patch, probably from a strip of couch upholstery in the clubhouse.

For those of you that are waiting for packages, rest assured, I haven't forgotten you.  I'm really trying to get those out starting in the next few days.  Thanks for your patience.