Yesterday, I walked in and found this waiting for me. 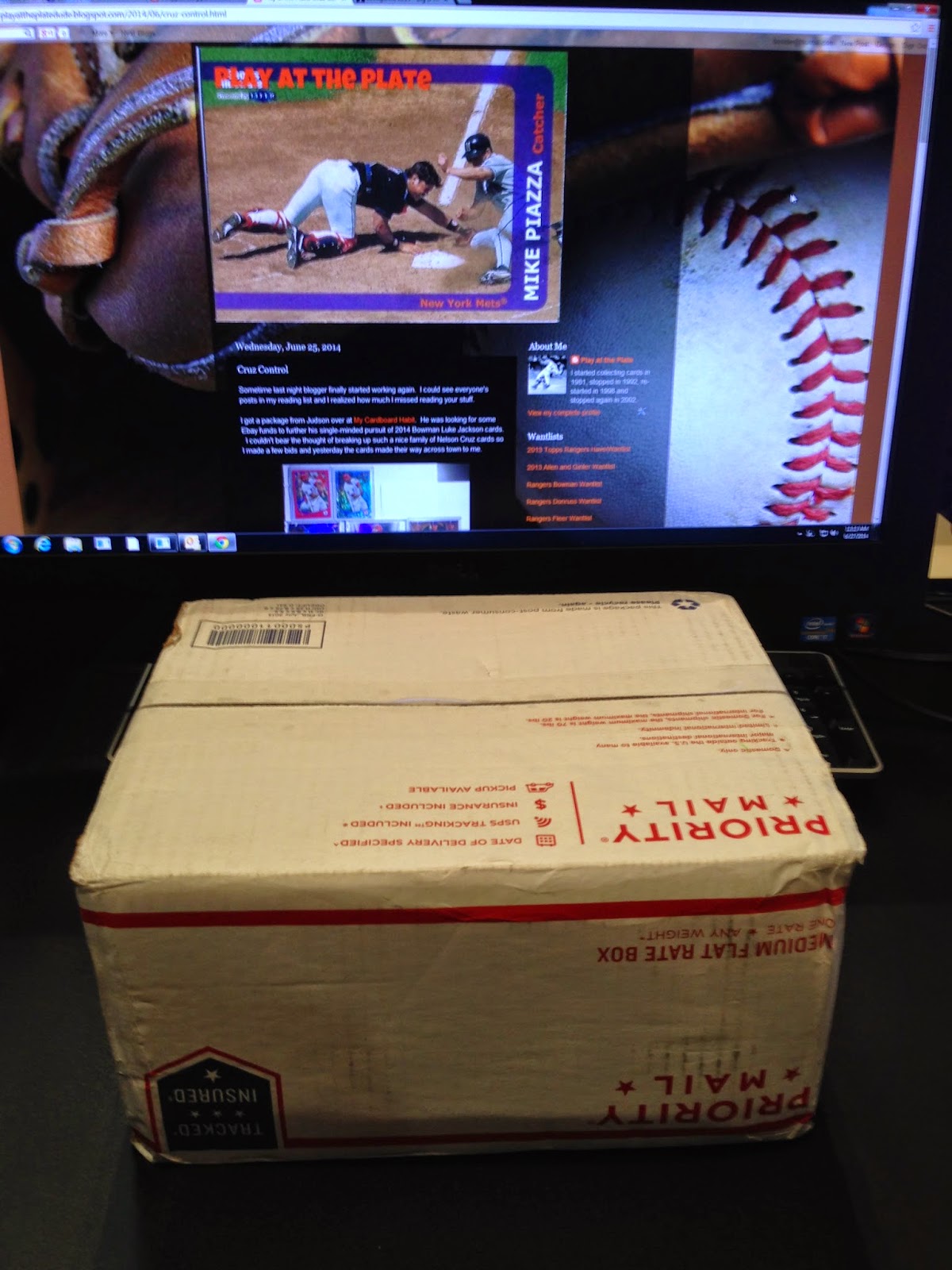 That is a medium flat rate box and it was stuffed with goodies from Dennis over at Too Many Verlanders.
Inside the box were 100's of basketball, baseball and football cards that I asked for in his Spring Cleaning Contest.  How cool is it to have a contest where you get entries by claiming FREE cards?  Very cool if you ask me. 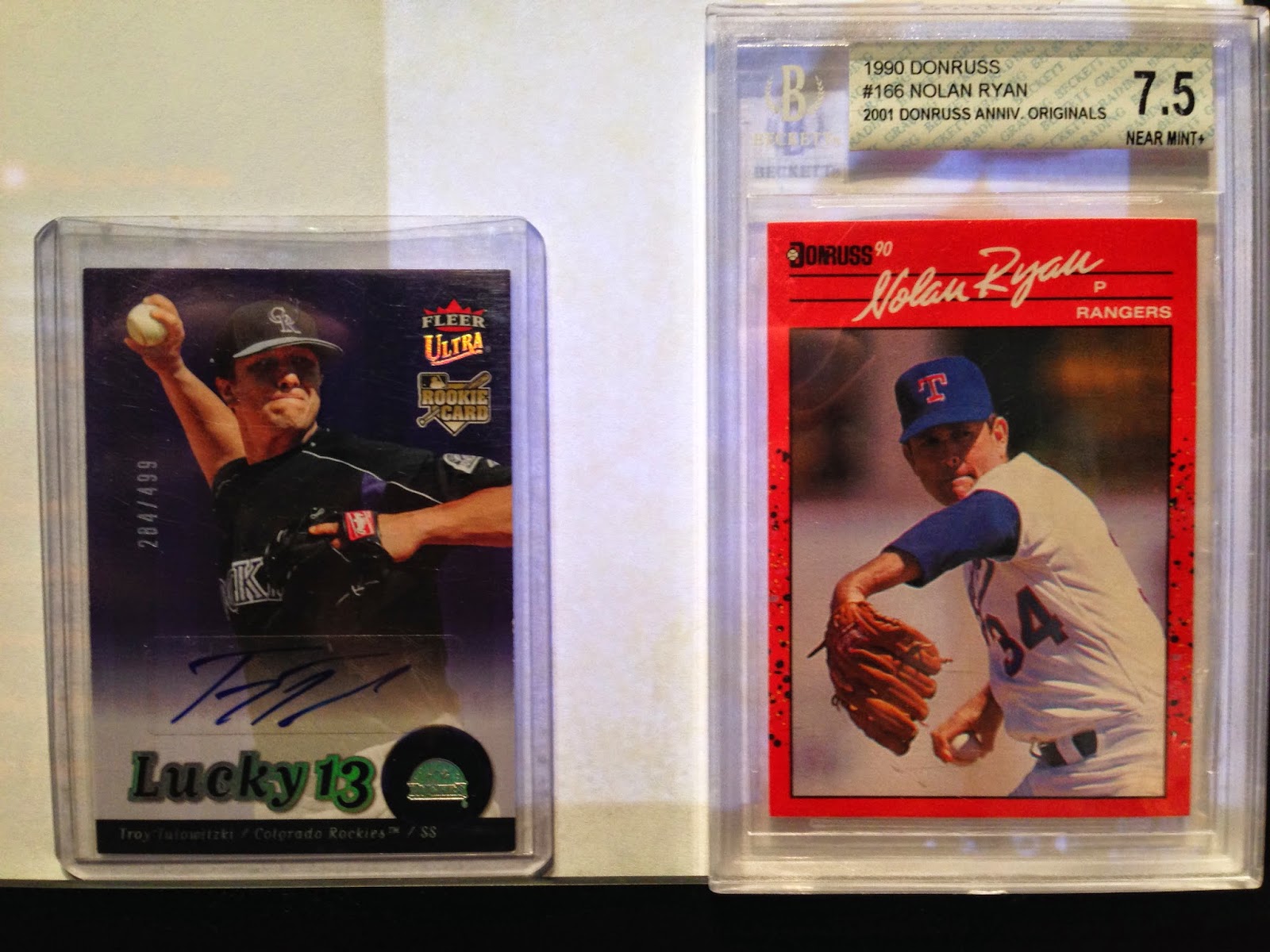 I somehow managed to land first on the randomizer and I chose the Troy Tulowitzki auto.  Dennis threw in a graded 1990 Donruss Nolan Ryan card.  I remember these were included in some Donruss boxes back in 2001 and I actually have 8 or 9 of these myself.  I didn't have the Nolan and who doesn't need a 1990 Donruss card with a sweet grade of 7.5. 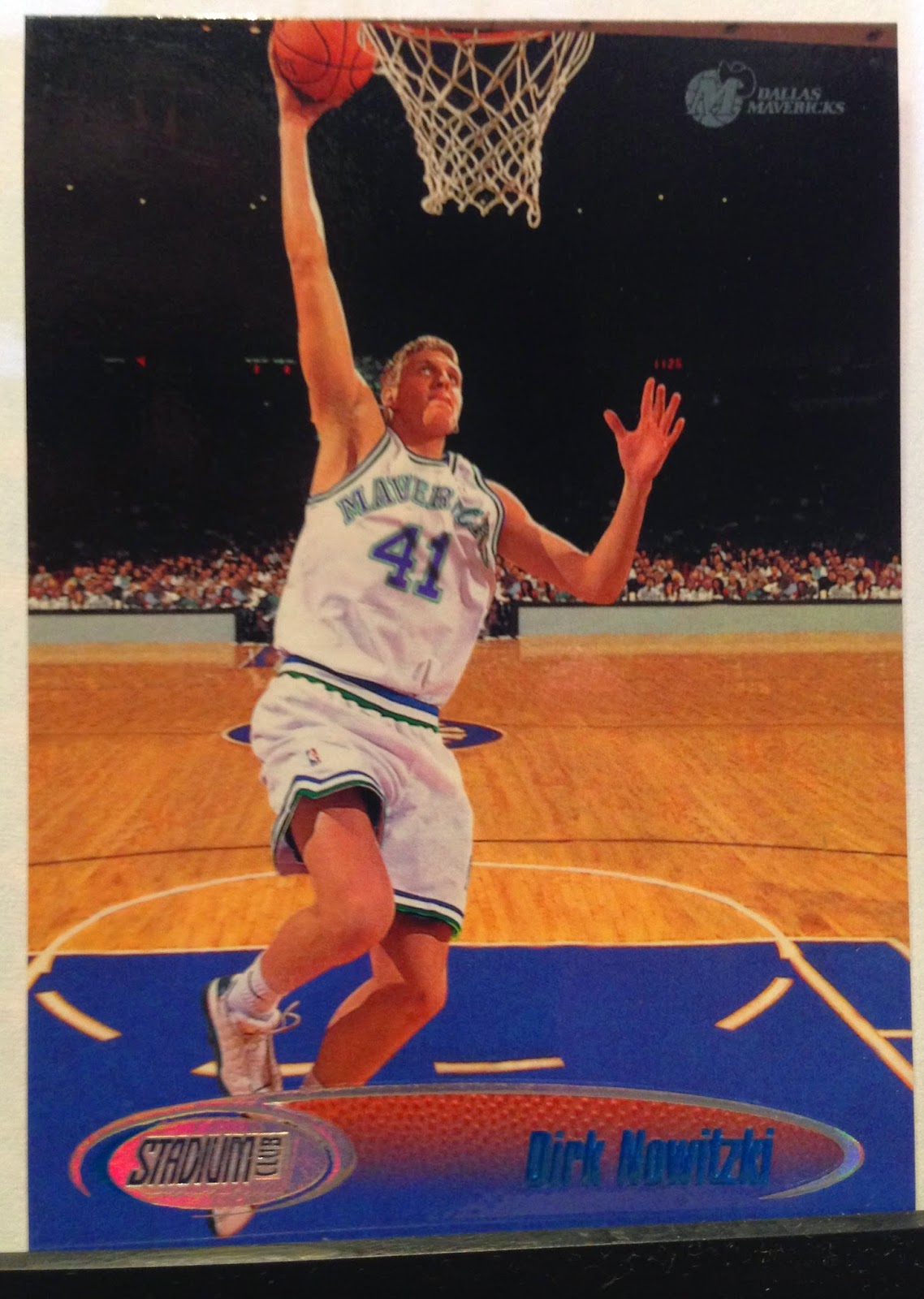 I could have picked out a ton of cards to show, but this first year Dirk Nowitzki Stadium Club caught my eye.  Apparently Dirk was playing 1 on none for this shot. 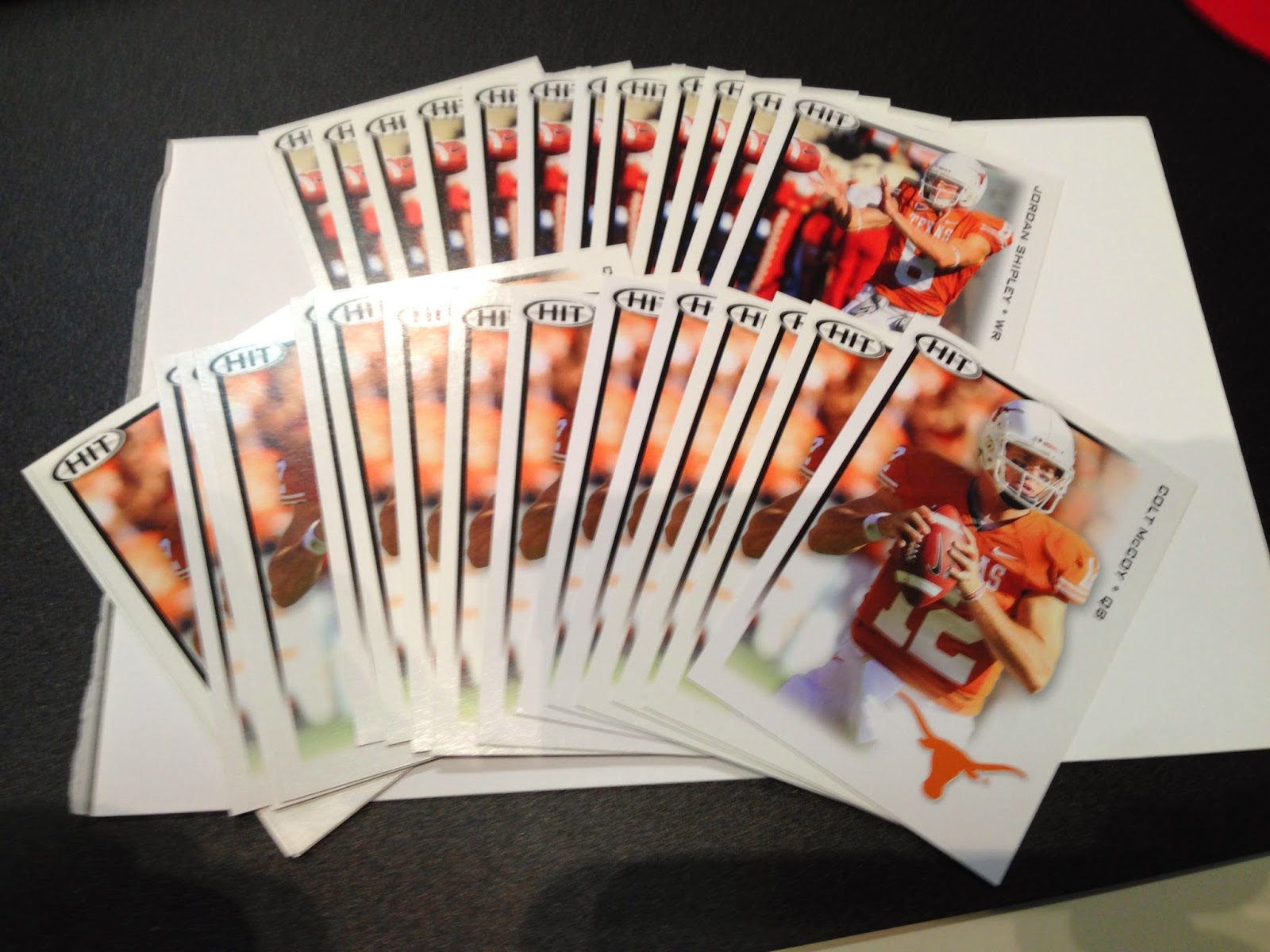 I told you I had been Shipleyed and McCoyed.  That's a healthy stack of Jordan Shipley and Colt McCoy cards.  My son is going to snatch these up because he likes the Longhorns and he has a small collection of Shipley and McCoy cards.

Dennis, thanks for the great contest and all the cards!
Posted by Play at the Plate at 7:30 AM 1 comment:

Sometime last night blogger finally started working again.  I could see everyone's posts in my reading list and I realized how much I missed reading your stuff.

I got a package from Judson over at My Cardboard Habit.  He was looking for some Ebay funds to further his single-minded pursuit of 2014 Bowman Luke Jackson cards.   I couldn't bear the thought of breaking up such a nice family of Nelson Cruz cards so I made a few bids and yesterday the cards made their way across town to me. 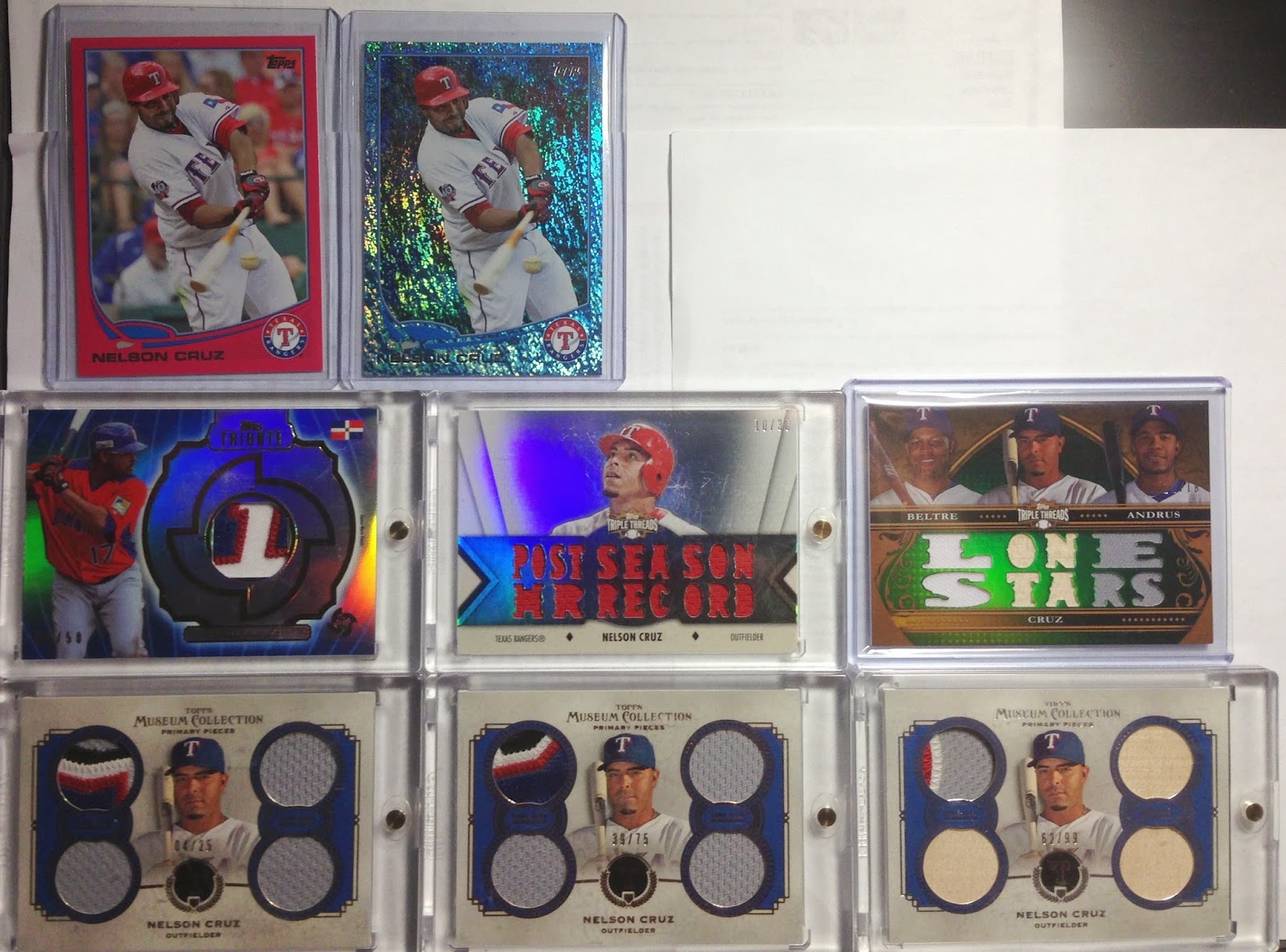 The two cards on top were bonuses and much appreciated.

Thanks for the cards Judson.  I'll give them a good home.
Posted by Play at the Plate at 7:30 AM 3 comments:

For the last two days, I can only see one post in my reading list.  It changes based on the most recent post written by someone I'm following, but no matter what I can do, I only see one post.

Is anyone else experiencing this problem?
Posted by Play at the Plate at 6:49 AM 16 comments:

Let's get a winner

It's high time we announced a winner in the "Manu-patch" contest.

Here are the two I pulled. 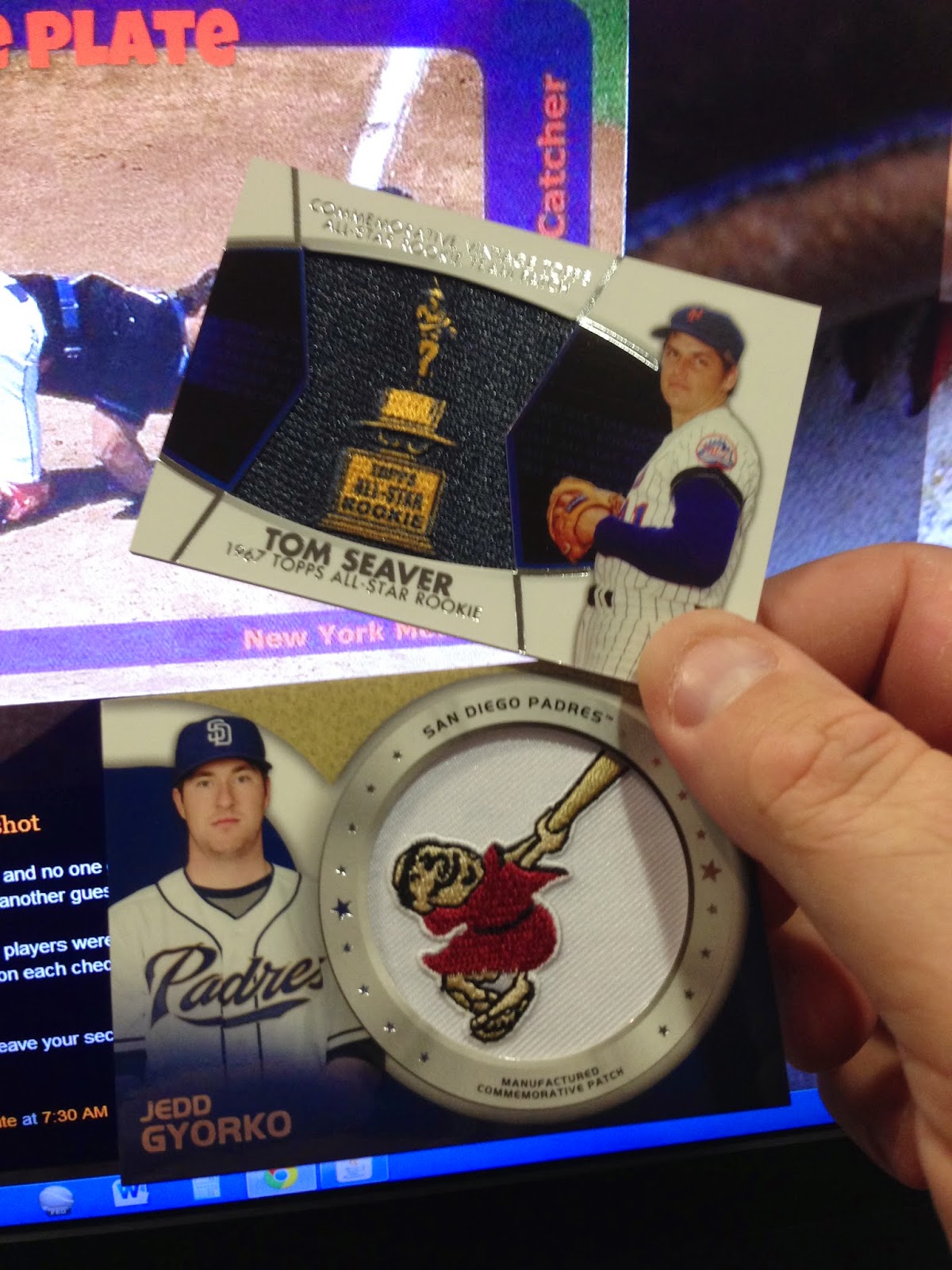 Spankee was the lone participant to pick Seaver.

We'll randomize each of them 4 times and the winner is... 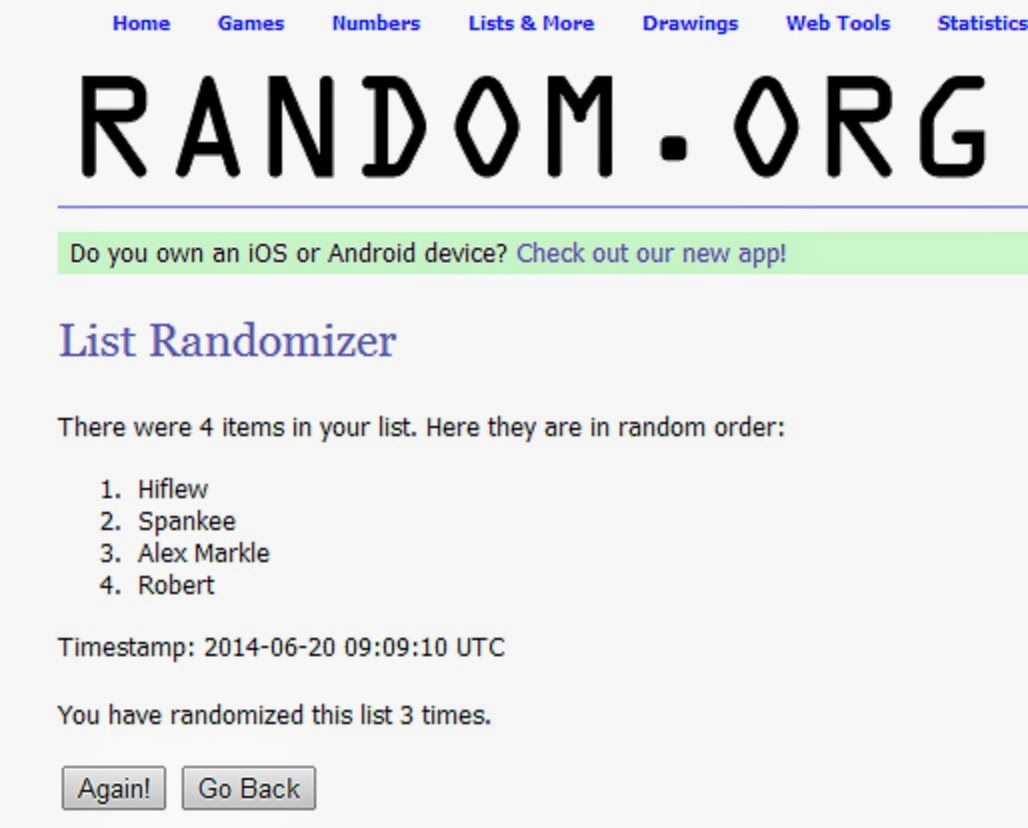 Congrats to Hiflew!  I'll be sending you a rack pack and some other goodies.

Thanks to everyone for participating.
Posted by Play at the Plate at 7:30 AM 6 comments:

Everyone gets another shot

I started a contest yesterday and no one guessed both of the manu-patches I pulled.  That means everyone gets another guess.

I'll give you a tiny hint.  Both players were guessed, just not by the same person.  By my calculations, 6 players on each checklist were not guessed so that would cut down on your choices a bit.

Go to the original post to leave your second guess.  You can find it right here. 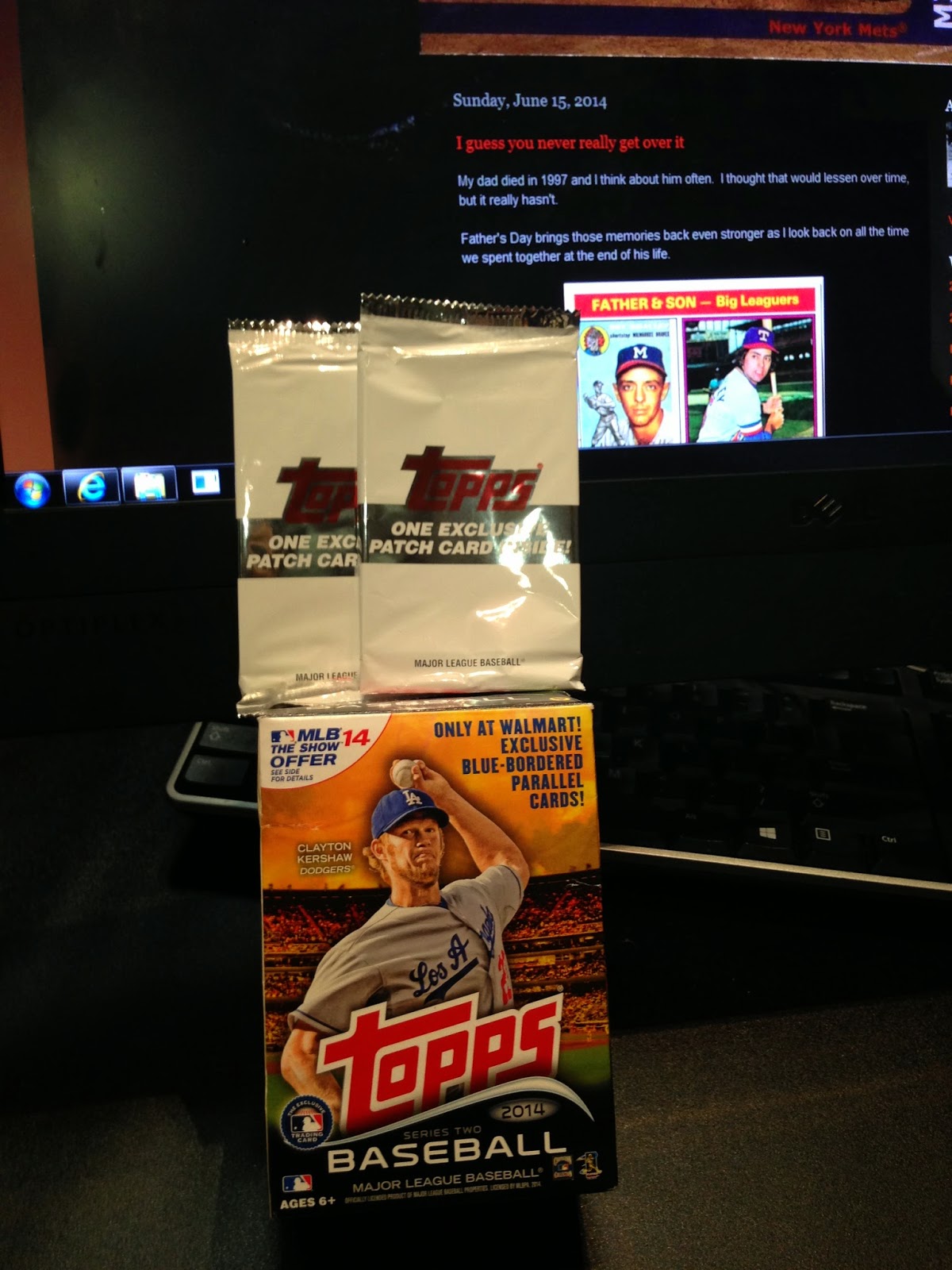 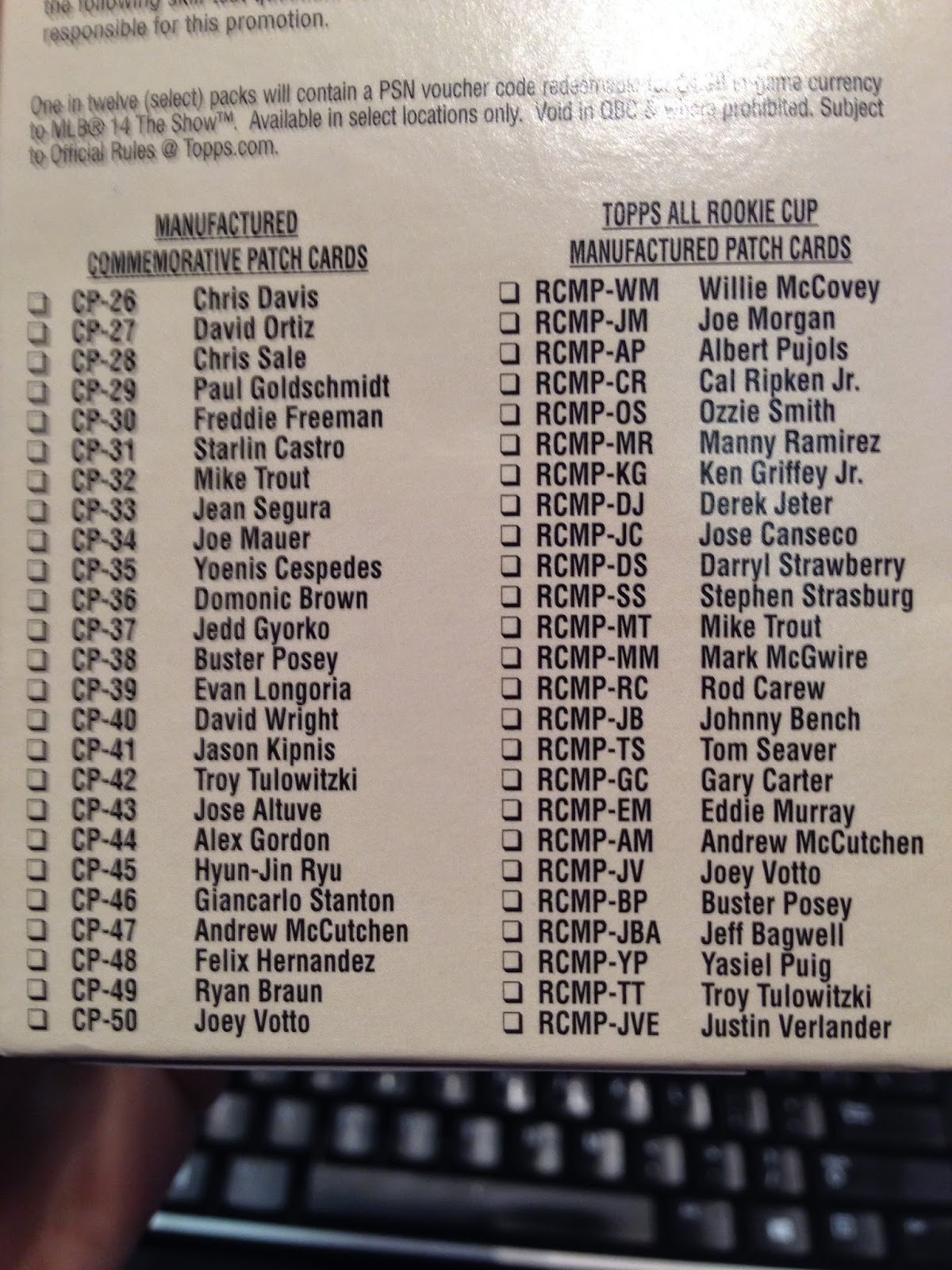 The flash drive I lost recently was black.  I realized this past weekend that I didn't just lose all my scans.  I also lost my updated Rangers checklists.  Every time I updated my list, I saved it on the flash drive. Fortunately, I have the original master checklist on my computer so I'm not completely messed up.  At some point, I just have to start with the master checklist and go through my team boxes to update it.  In the meantime, I have a thousand or so sorted Rangers that sit in a box waiting for me to get my act together.

I didn't title a post "Black" simply because I had a black flash drive.  I actually ended up at Target and found a blister pack of 2014 Heritage with three black parallels.  Knowing full well that I wouldn't pull any Ranger parallels, I ponied up the money anyway. 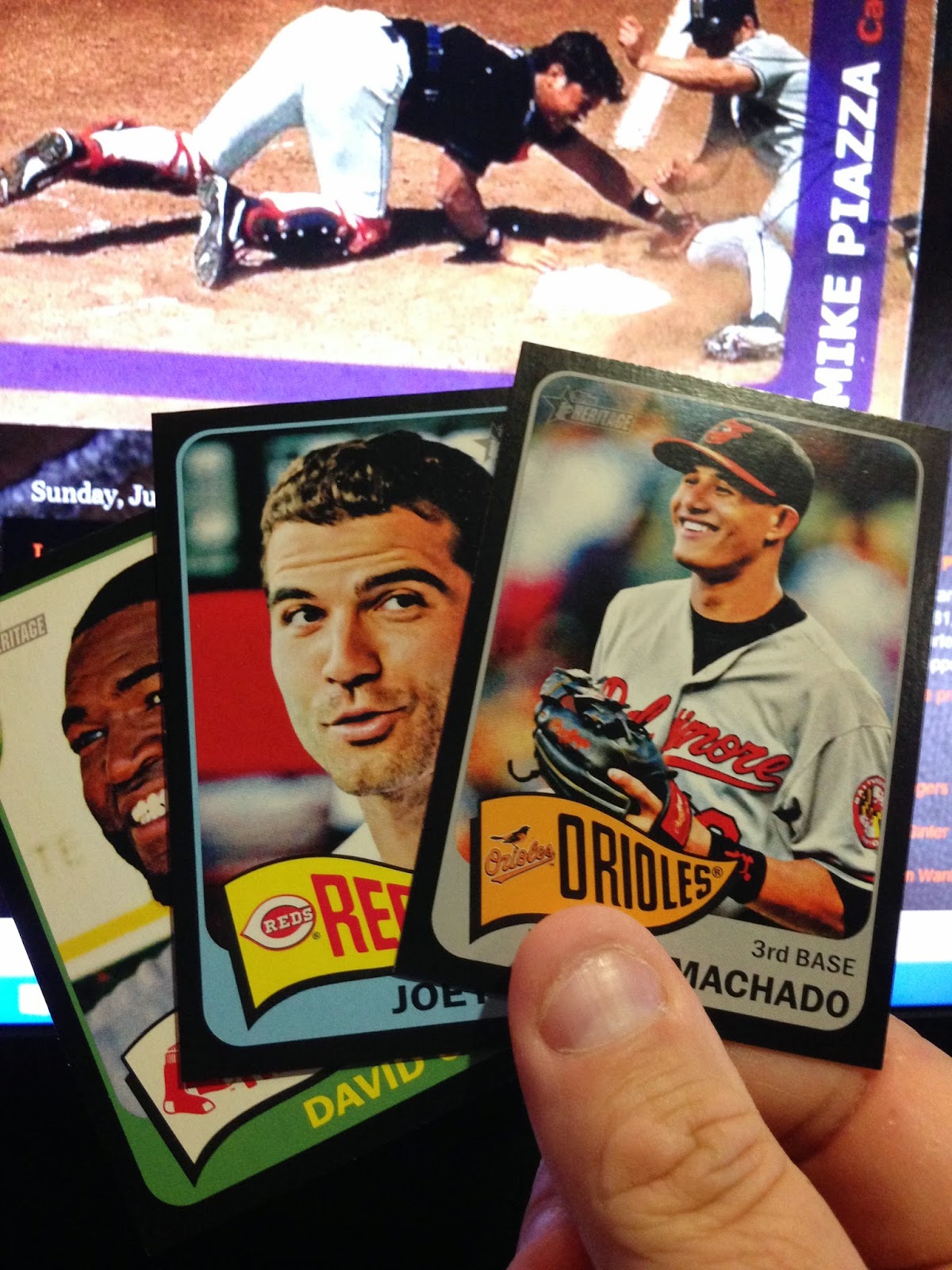 I know some collectors out there that would be happy with Big Papi, Joey V or Manny the Batman.  It's just trade bait to me. 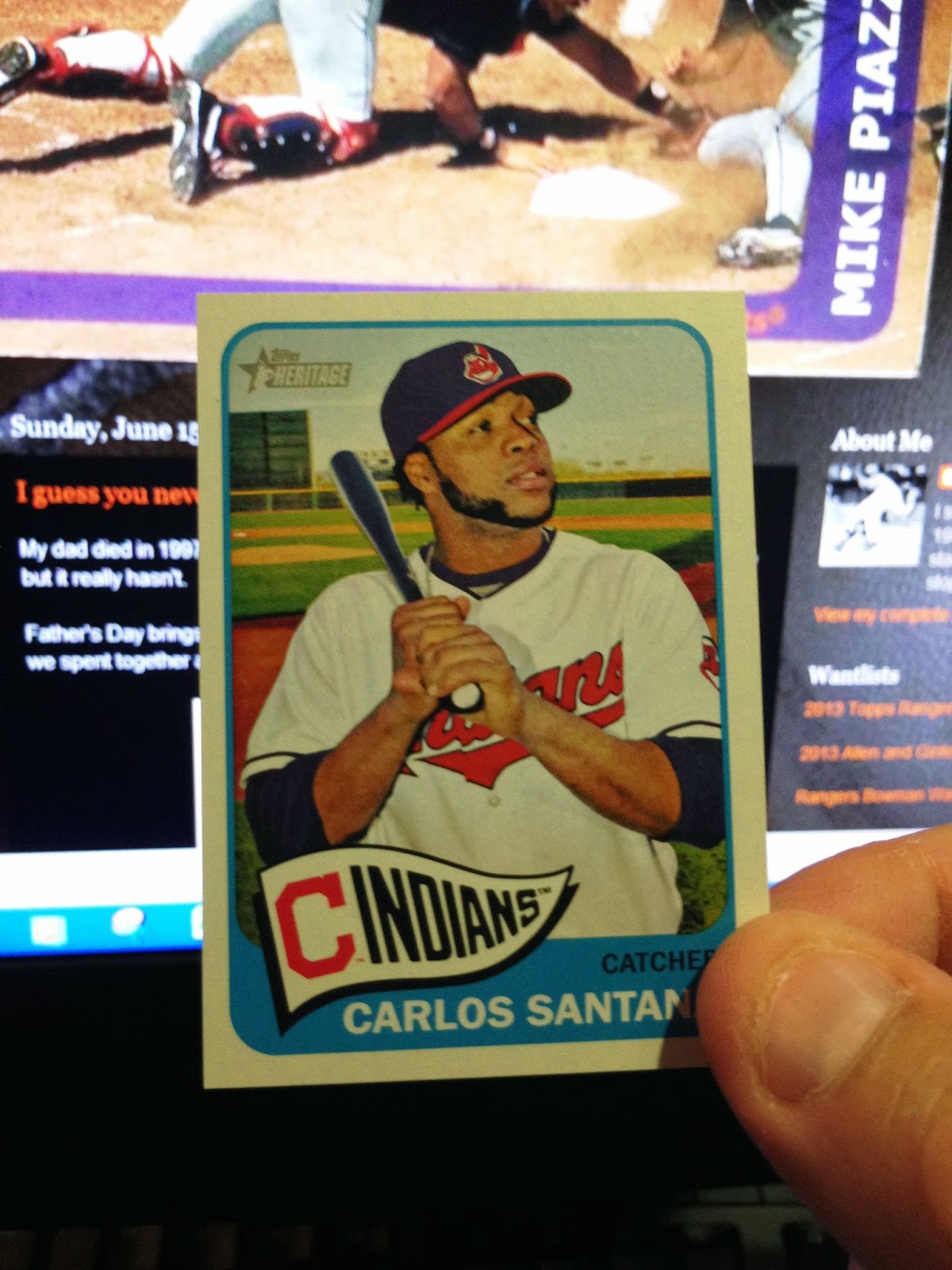 I did pull one thing that I liked.  Sure, it's a catcher, but it's not just any old regular catcher. 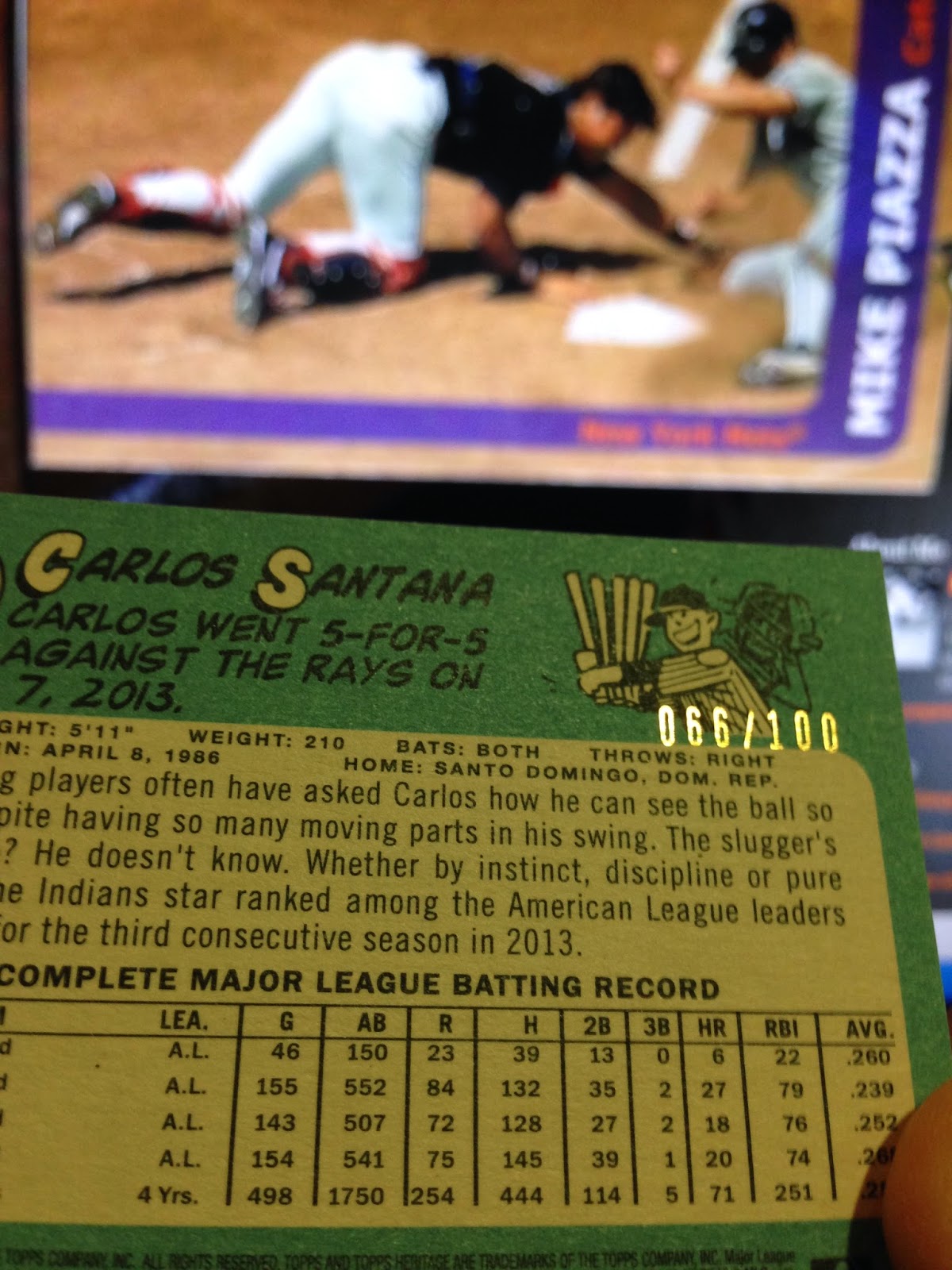 It's a mini Carlos Santana #66/100.  I bought a number of blasters of Heritage and didn't pull any minis and very few Chrome cards.  I haven't been back to Target since I bought this pack last week, but it was the last one so I doubt they have any more.

I guess Topps Series 2 is all the rage now.  I bought my two blasters and I'm done with it.  I'll show you the "spoils" of those tomorrow.  Maybe it's even time for another contest.

I guess you never really get over it

My dad died in 1997 and I think about him often.  I thought that would lessen over time, but it really hasn't.

Father's Day brings those memories back even stronger as I look back on all the time we spent together at the end of his life. 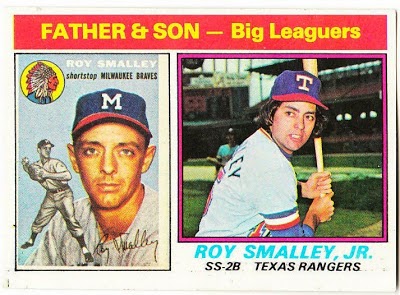 I'm not trying to be a downer on Father's Day so let me just say, if you're a dad, I hope you get to spend some time with your kids today,  If you still have your dad, let him know how much he means to you. 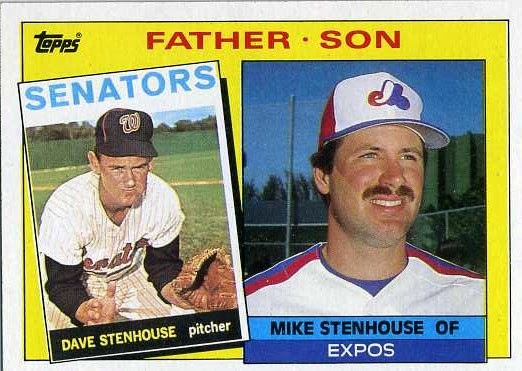 I'm finishing up a 12 hour shift at work so after a little nap, I plan on spending the rest of the day with my boys.

What, no one likes TTMs anymore?

Judson over at My Cardboard Habit is having a contest and all you have to do is try to get some autos for your collection.  What's not to like?

Only two of us have signed up so far so don't get left out. 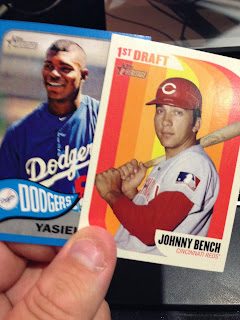 What are the odds that I can get returns on these?  Yea, that's what I thought.

I'm not a big fan of graded cards, but I might just have to jump on this one.  I don't believe I've ever seen a card with this grade before.

I know many of you will be jumping in to make an offer so good luck!

Let me know what you think.

Just pimping a contest over at Red Cardboard.  Go enter.  Tell him I sent you.  Just don't win before I do.

Let's get ready to rumble!

The title of this post would lead you to believe I'm enthusiastic about writing, but I'm really not.  I miss writing a daily or even twice daily post, but real life is dragging me down right now.  Braces, car repairs, a saxophone (what?) and a few less expensive money drains are killing me just as summer starts and the dear wife wants to "go somewhere before the kids are all grown up".  If someone dropped ten grand in my lap, I could just about get out from under all this, but since that's not going to happen, I bought two packs of hobby therapy and decided to make a pack war out of it.

Without further bellyaching, I give you 2014 Archives Hobby Pack Wars. 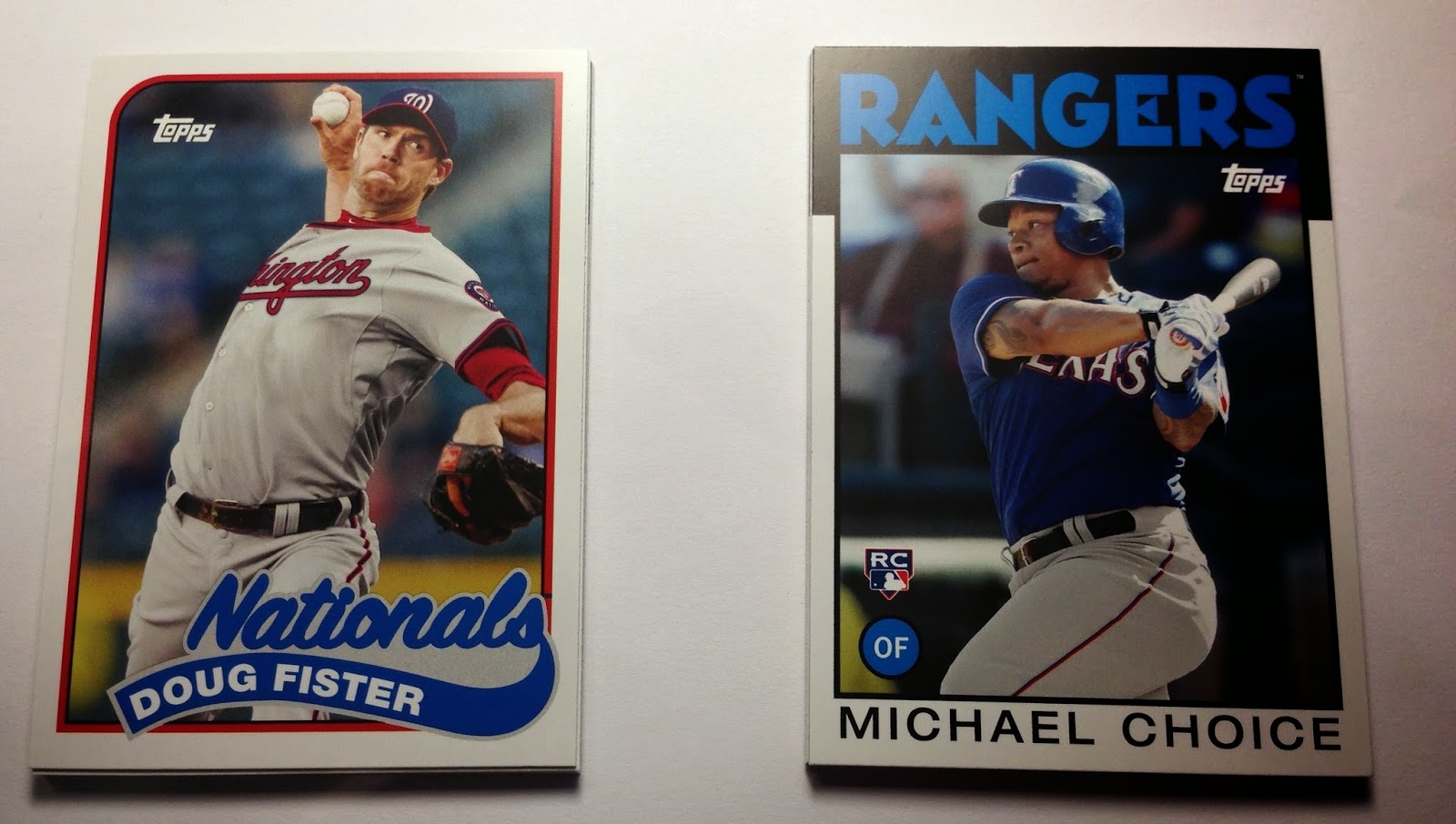 Do we really need to score this round?  Ok, I'll humor you.

Choice gets bonus points because he's one of the few Rangers left standing.  I'm pretty sure the Rangers have more starters on the DL than they have on the field. 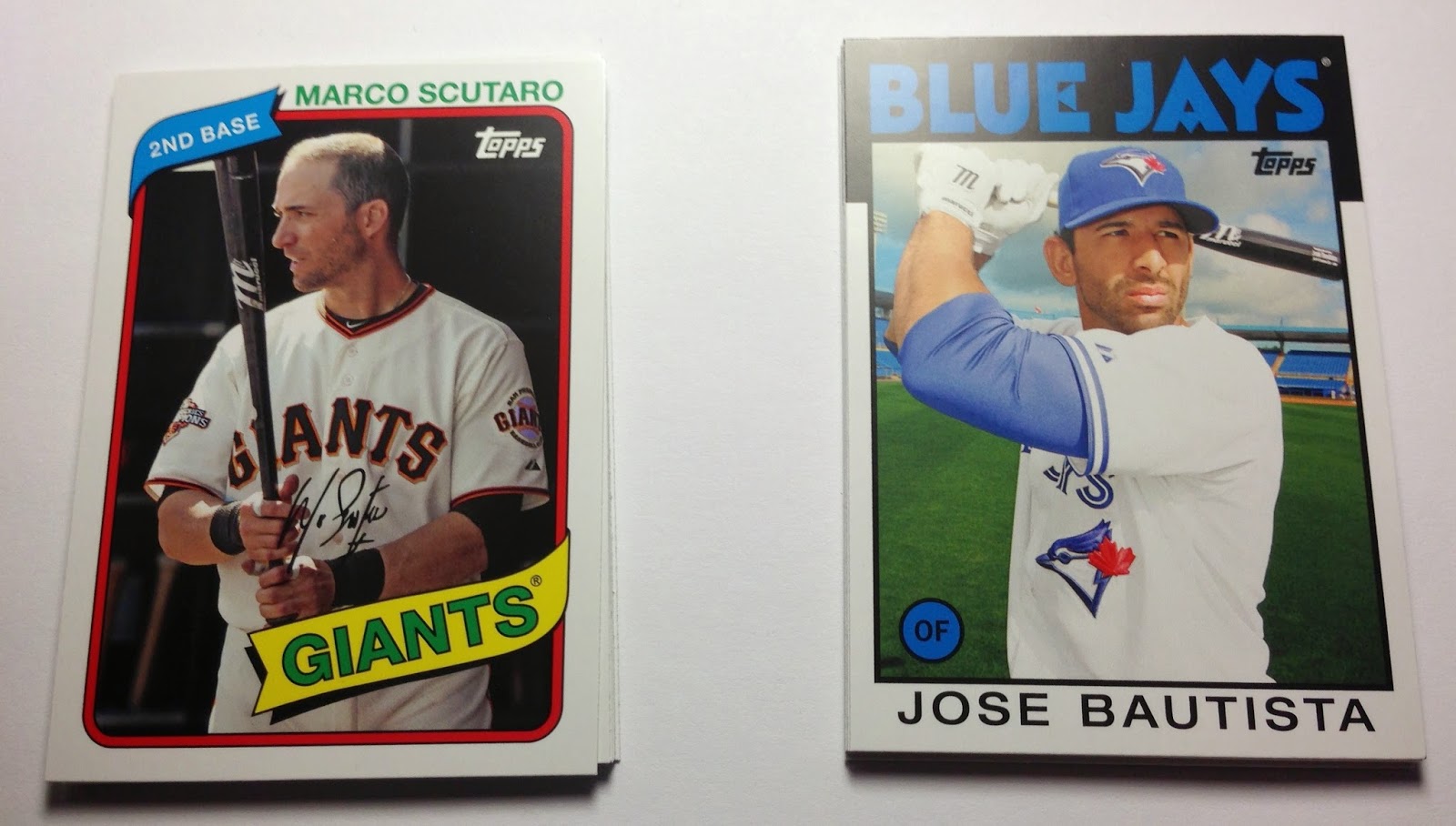 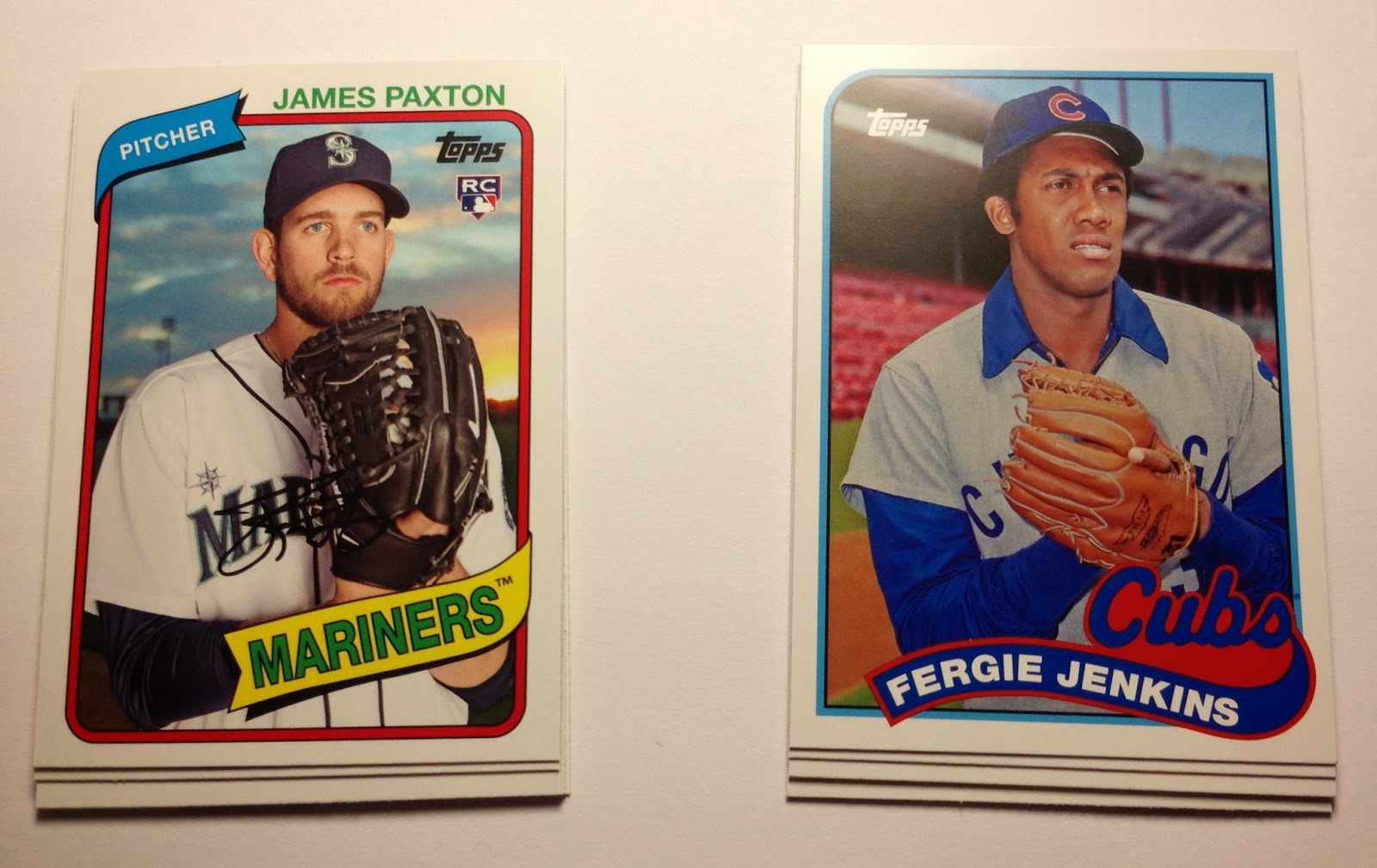 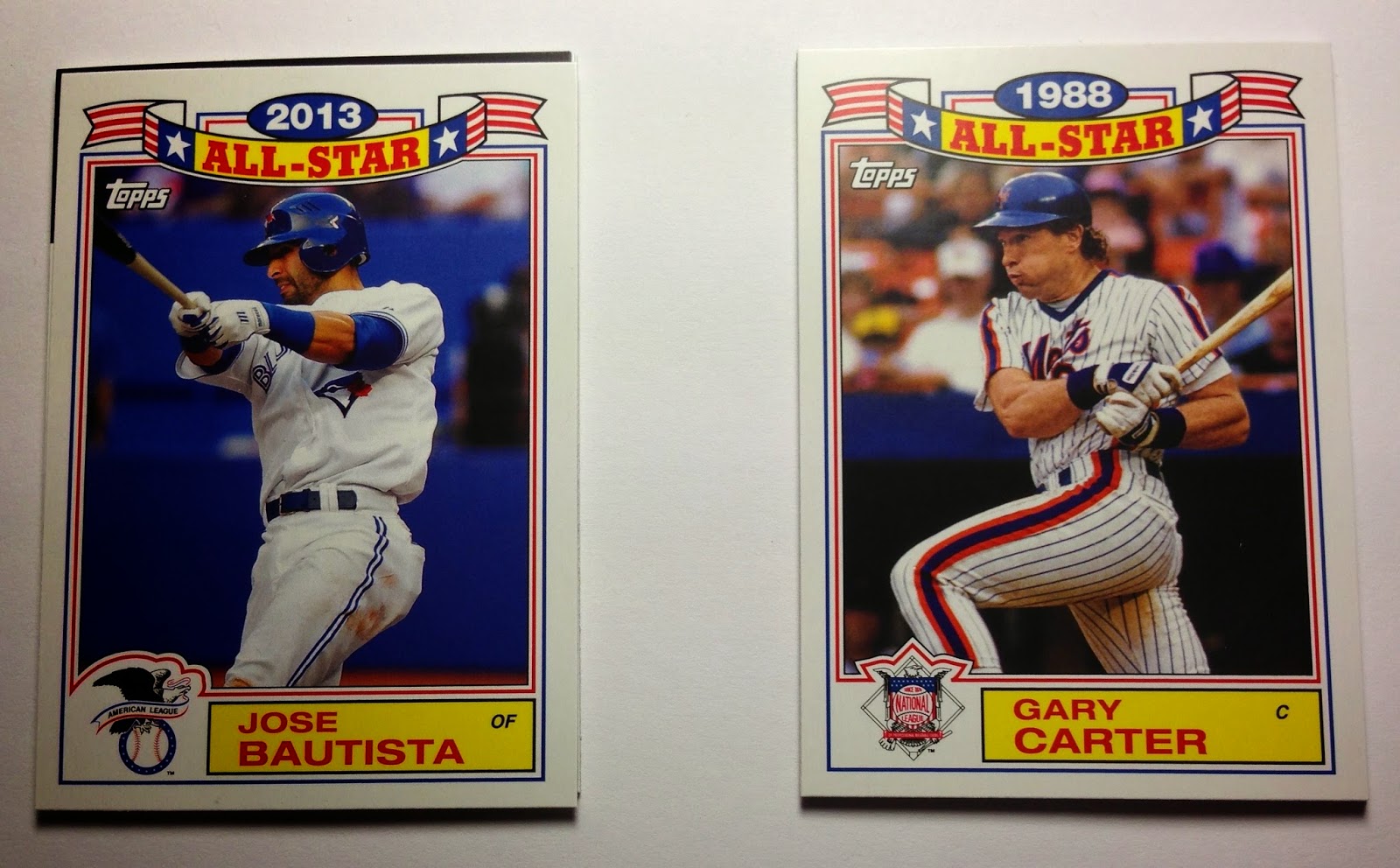 The inserts fell in the same spot in each pack and were of the same type.  Scoring was still easy. 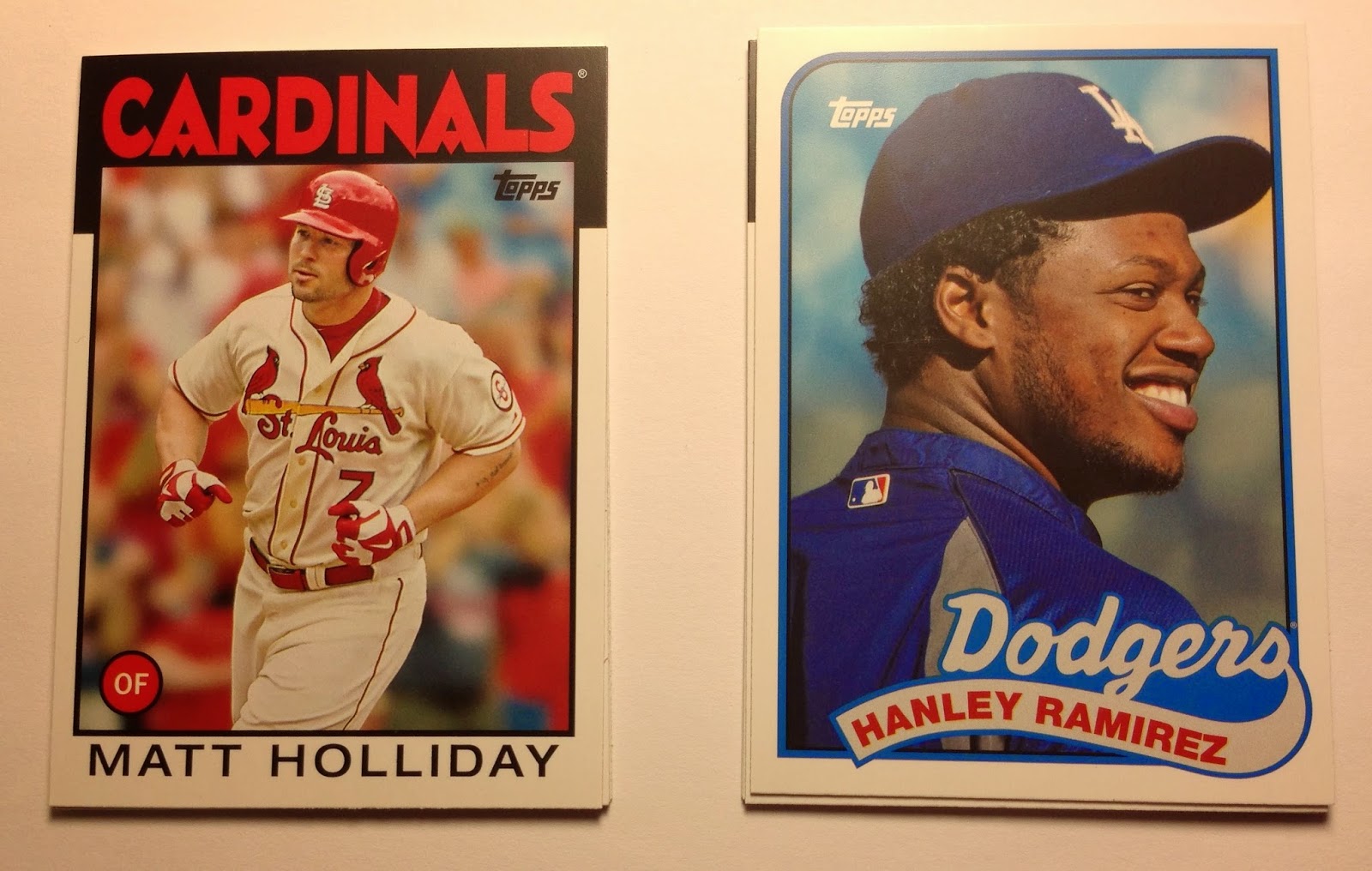 Matt Holliday - still pissed at the Cardinals for beating the Rangers in the World Series -1000
Hanley Ramirez - hey, he looks happy for a guy stuck on that design - 8 points

Pack #2...this is getting redundant. 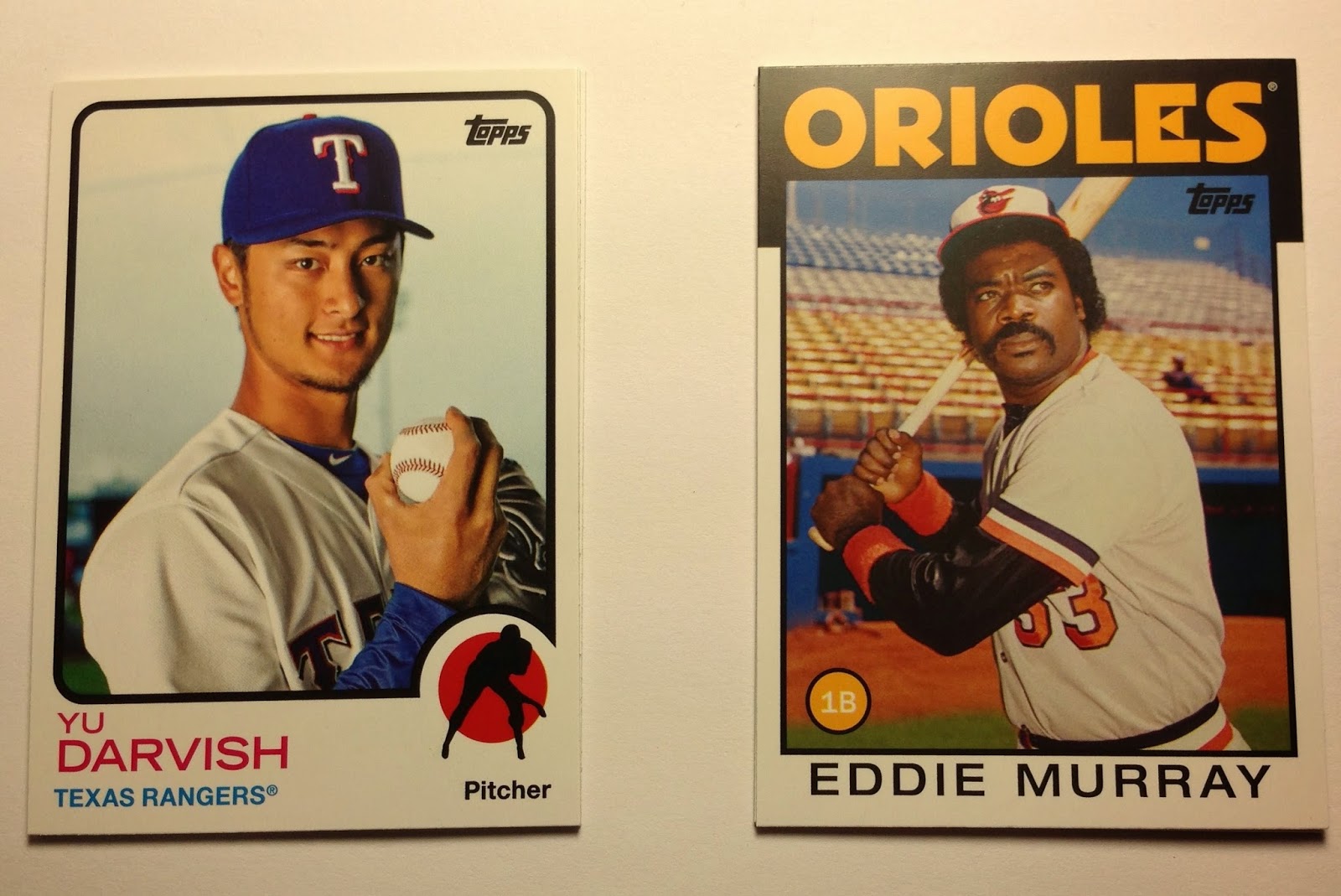 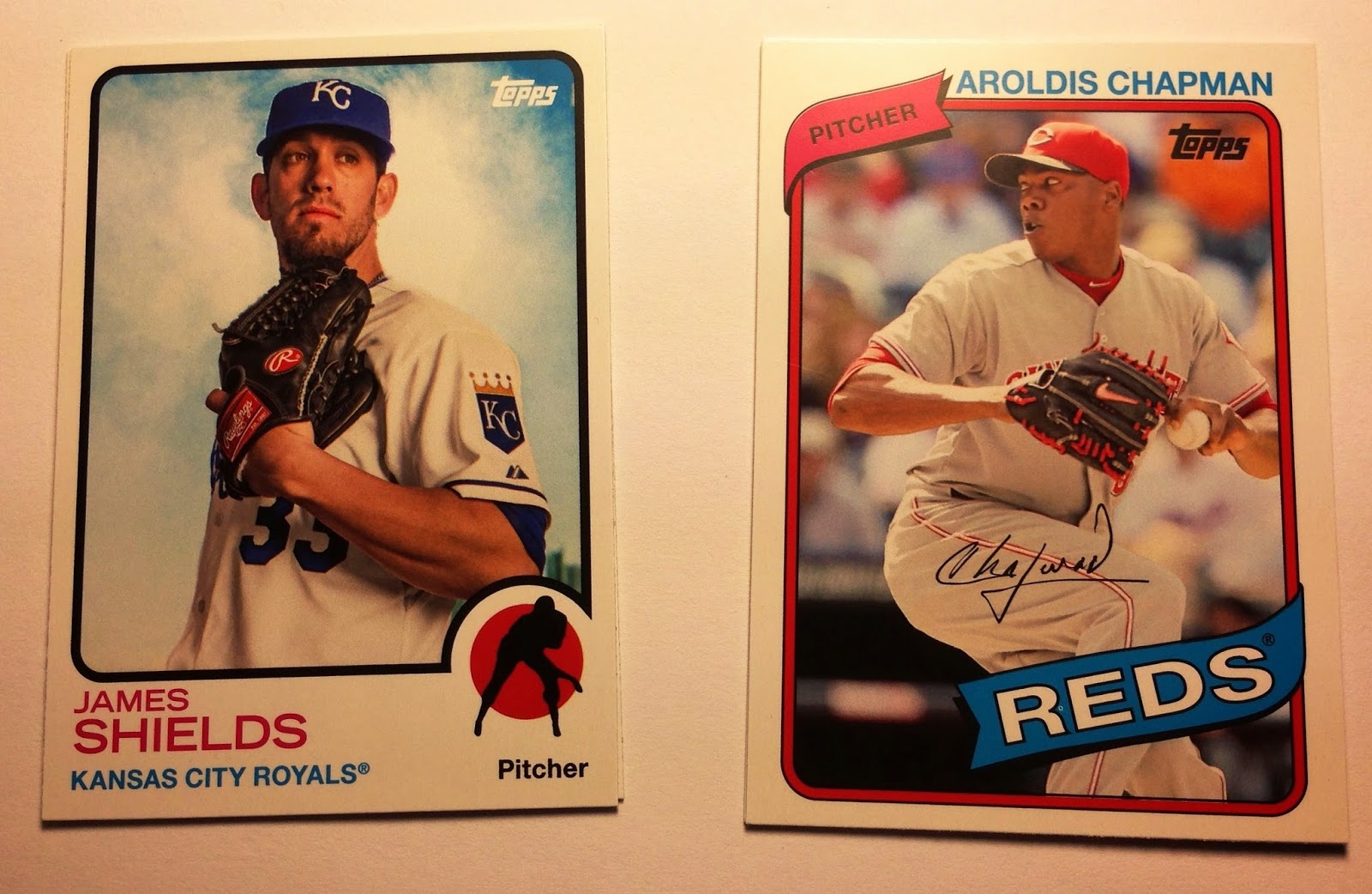 James Shields - ho hum player on a sweet design +23 points
Aroldis Chapman - got hit in the face, now he gets beat down in Round 7 -5 points 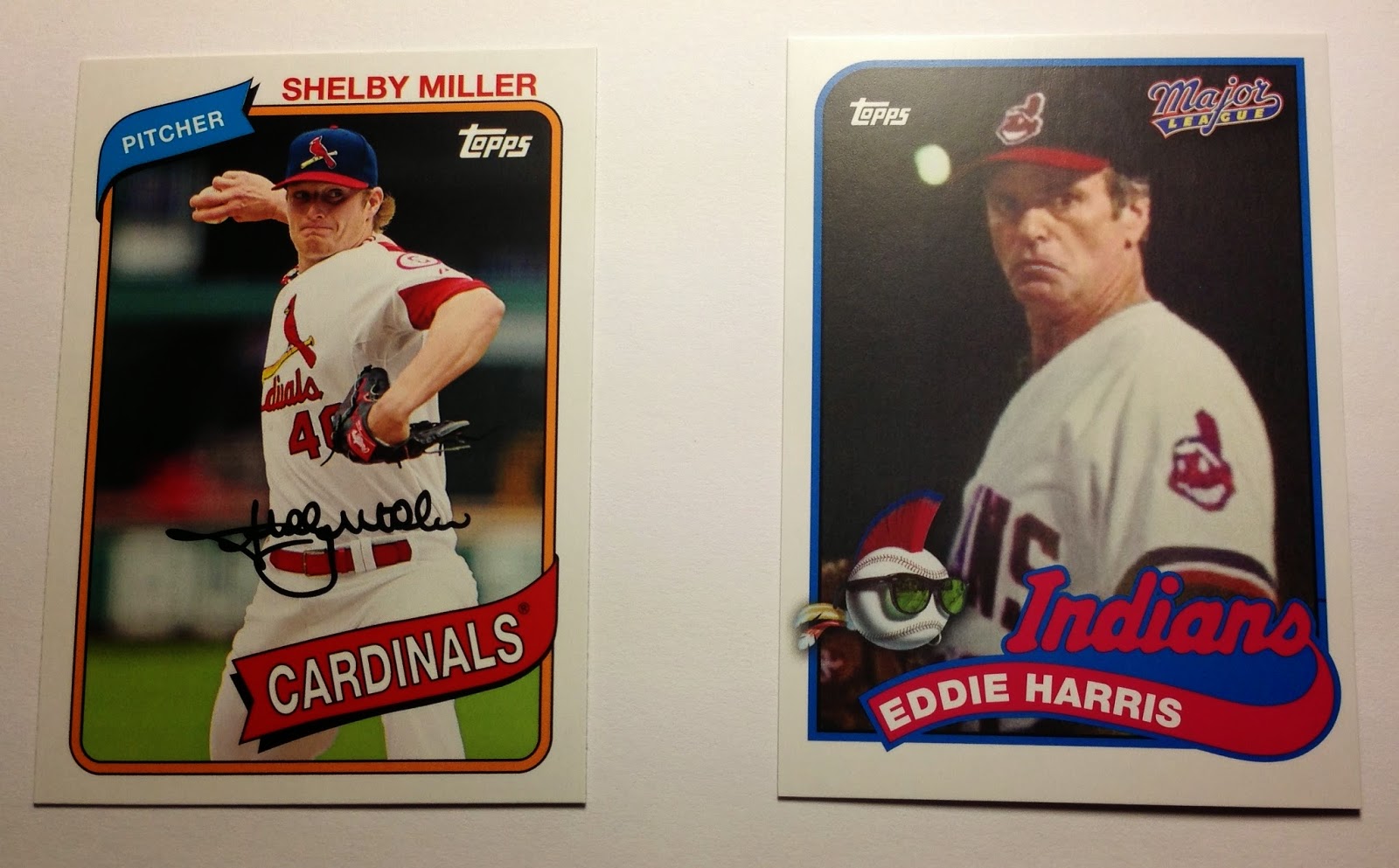 It wasn't even a contest really as pack two won 6 of 8 rounds.  If it wasn't for Yu Darvish, pack 1 would have been a complete waste of money.  In reality, both packs were a waste of money, but I did get to write this snappy post!

Have a great day.

Now I know the answer to my question

Last night I got my answer.

Chisenhall went 5-5 against my Rangers.  He had a single, a double, three homers and 9, that's NINE, RBIs. 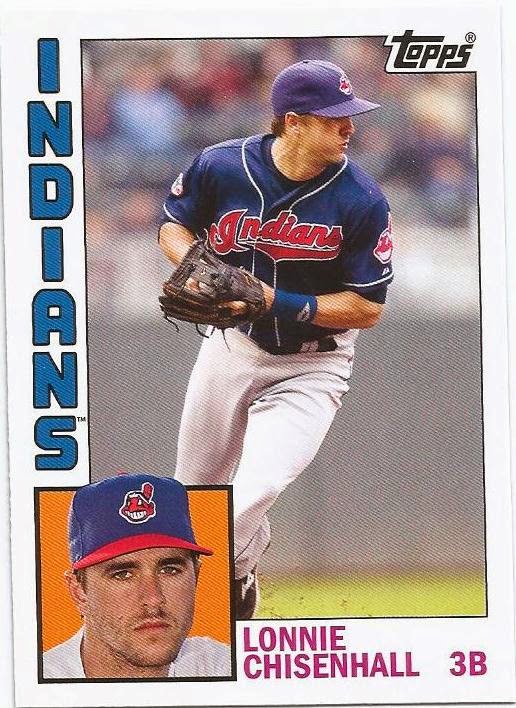 Mr. Chisenhall, I'm sorry I ever questioned you.

I don't how they did it, other than someone had to, so they did. 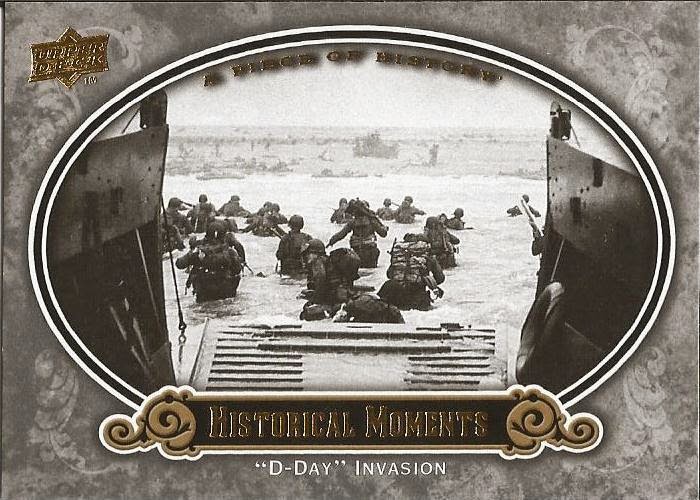 Thank God they did.

There aren't many of them left now, some 70 years later.  If you know someone who was there, thank them for me.

The sorting is done!

Last night I finished sorting through the 4th and final monster box, pulling cards for a number of you fine people.  I don't think I've ever been more happy to come to the end of a box of cards.

I tested out the panoramic feature on my camera phone and I think it turned out pretty well.  Each of the 24 stacks is labeled, but I thought I'd help save your eyesight a little and label them.

The last stack on the far right is mine.  I kept more than that, but the rest were already stored away.  This doesn't show the stack for Ryan G.  His stack takes up a row and a half in one of the 5000 count boxes.

Some of you offered to help with shipping and I'll probably take you up on that once I start shipping.  I'll let you know when they start going out.

A guy where I work has been "threatening" to bring me a box of cards from his house.  He said he's had them forever and just wants them out of his house.  He hopes they're worth "billions". 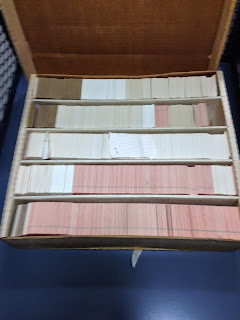 Well, the thought was nice, but they're worth about $2.  And that's being generous.  It took less than two minutes to figure out that the box is full of 1990 Topps, Donruss and Fleer with just a smidge of 1990 Bowman.

After going through those other 4 monster boxes, I just can't stomach going through these.  I'm going to give them to my son to dump off on his friends or I might use them in the fire pit.  Either way, I'm not even sorting out the Rangers.

He did bring in a plastic bag containing some other goodies, but I'll save those for tomorrow.