Happy Halloween.  That's a weird thing to say isn't it?  Happy scary day...strange.  Of course, it's the middle of the night and I'm in a half-coma, so what do I know.

I posted the other day about a few cards I got for 50 cents from my LCS friend.  I thought I'd show the other half of the cards and let you tell me again if I got a good deal. 2004 Heritage is one of my favorite Heritage sets.  I found this Todd Helton chrome version in one of the boxes I searched through and threw it in the pile. 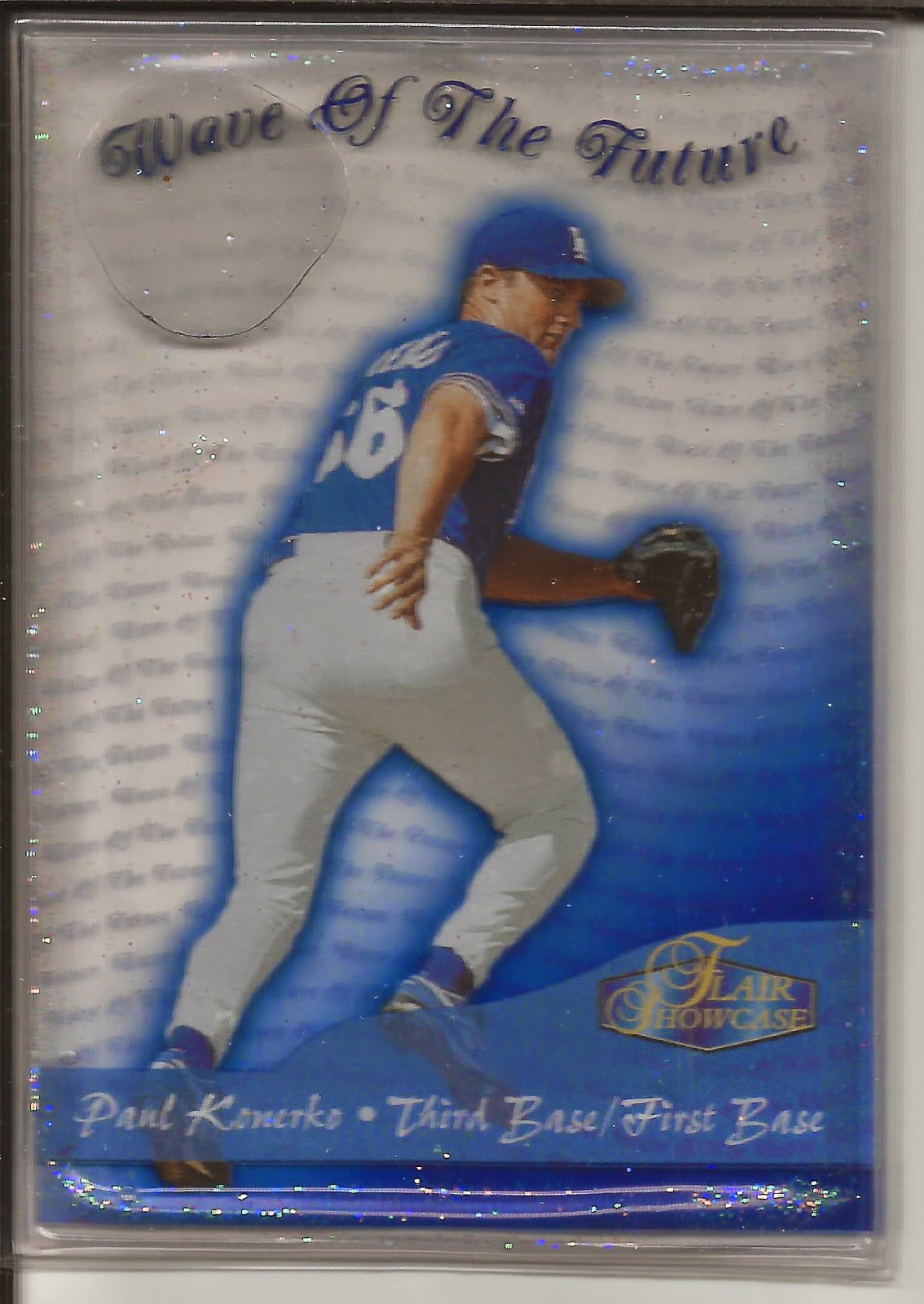 At one time, these 1998 Flair Showcase Wave of the Future cards were popping up across the blogosphere.  I think the fact that they have actual water in them makes them a unique and weird collectible.   This is Paul Konerko with the Dodgers.  That sounds weird. 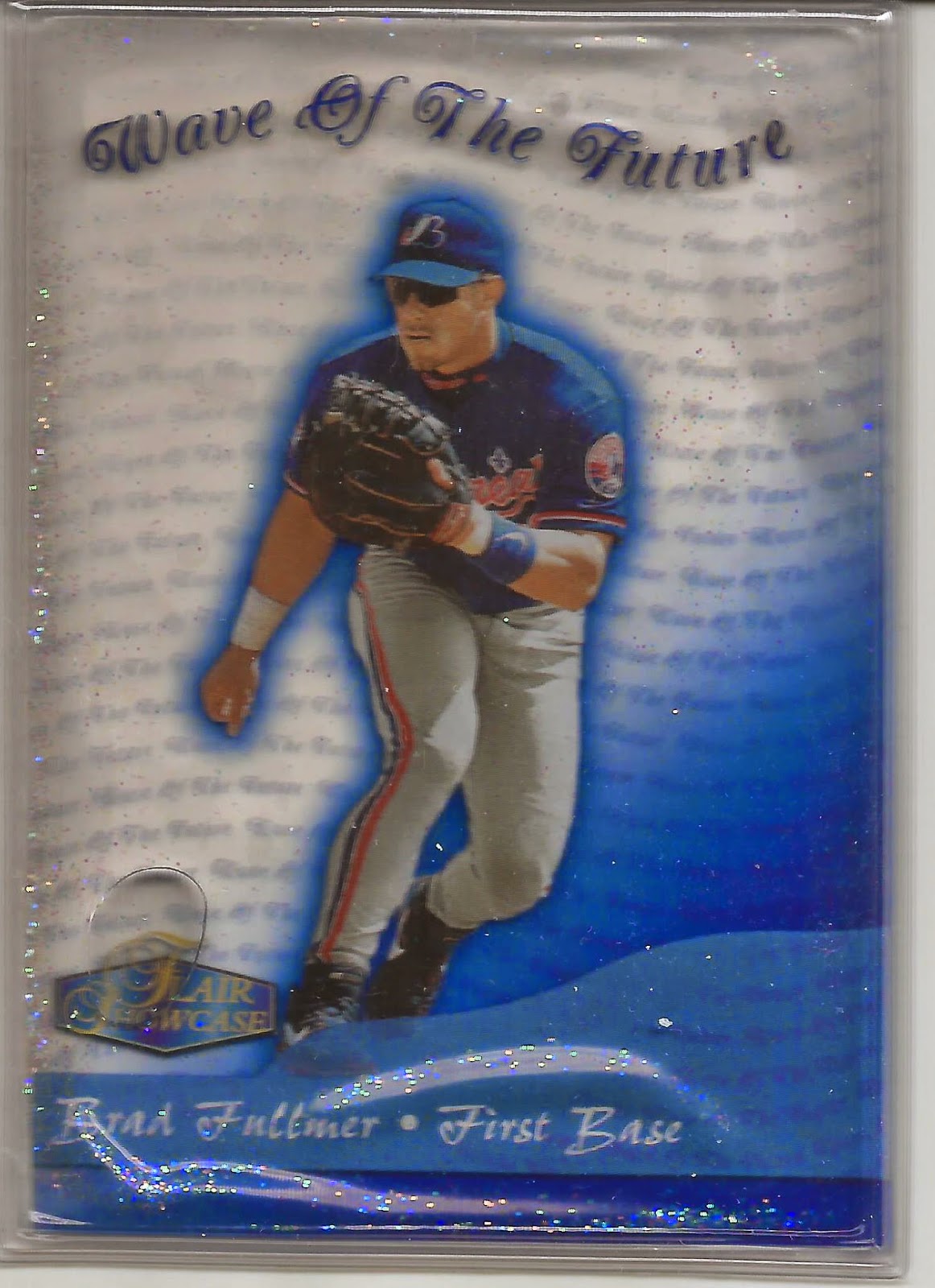 I found the Konerko and this Brad Fullmer in another box and decided I needed a couple of these right away.  They are perfect for the Doomsday Prepper who collect cards.  You can always use them as a source of drinking water.  (I would NOT drink that water...just sayin'). 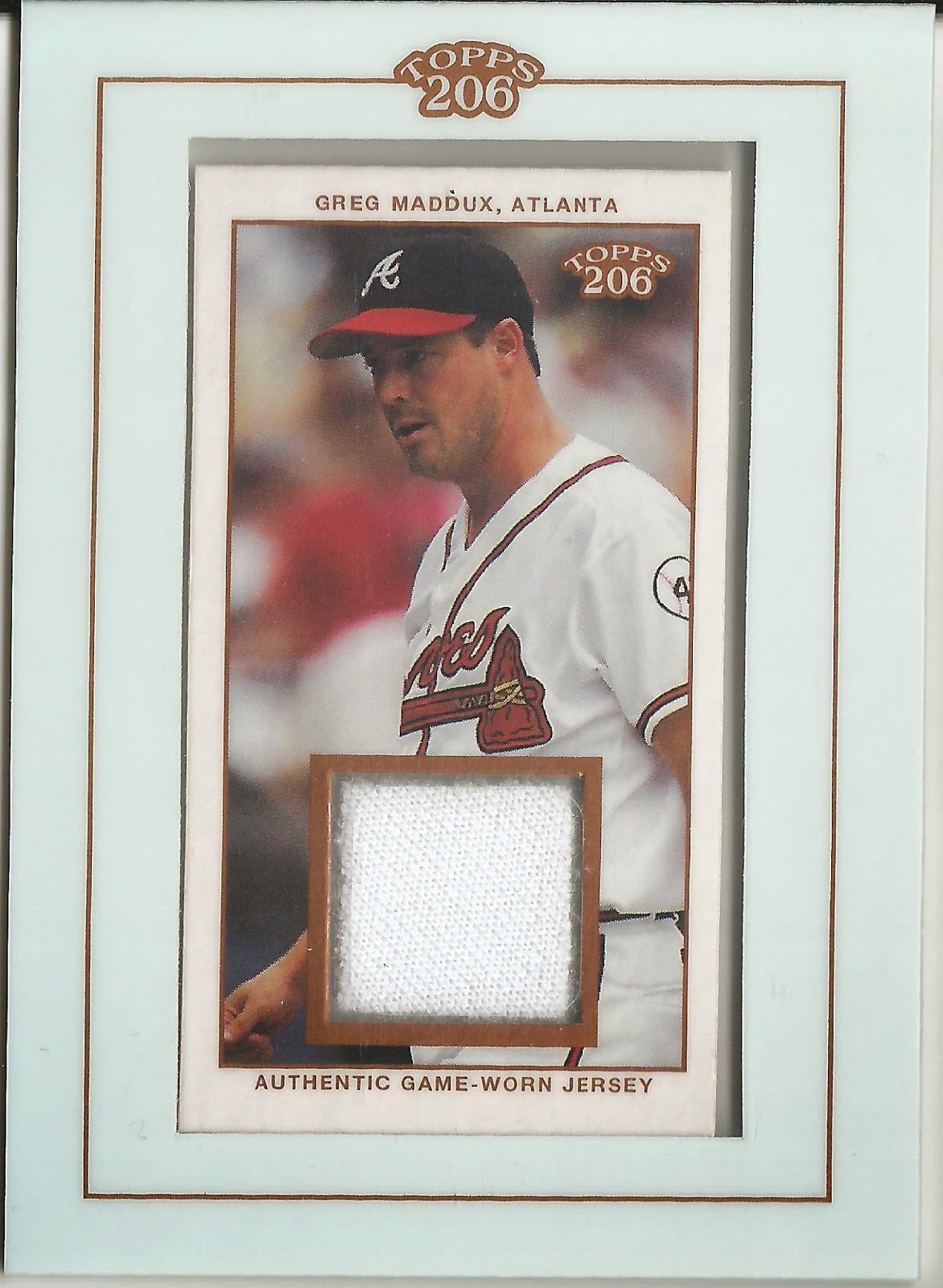 This 2002 Topps 206 Greg Maddux wasn't in the dollar group. It actually didn't cost me a thing as he gave to to me free just 'cause he's a nice guy. 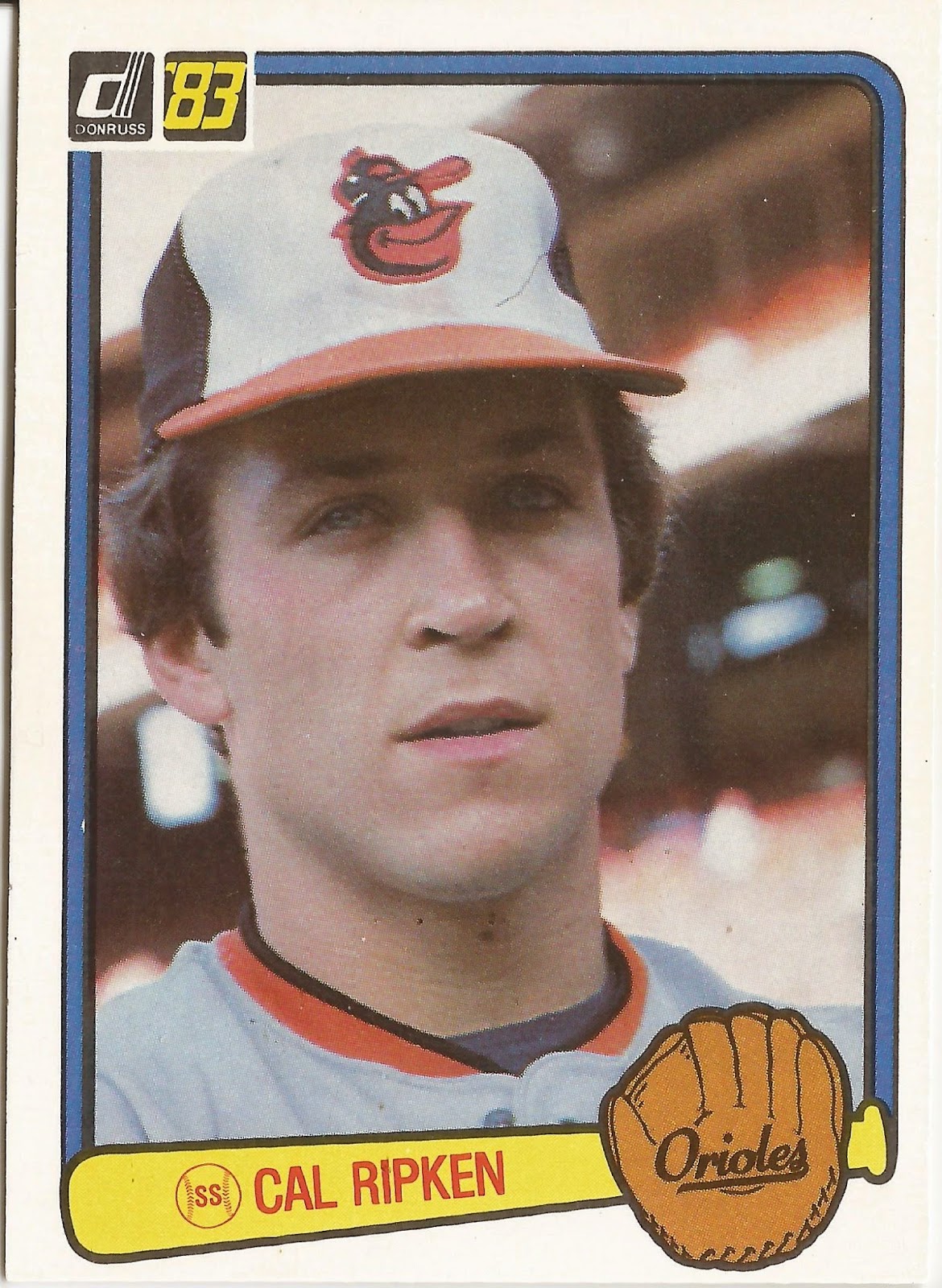 The last card in the "buck" lot was this old thing.  It's not really vintage in my book, but I'm not turning down any early Cal Ripken Jr.  Even if he isn't going by Jr.

The other cards I bought will be revealed as a part of my November contest.  It starts tomorrow so I hope to see you back!

Be safe out there tonight and send me all your Reese's Peanut Butter cups.  You don't want those things anyway.
Posted by Play at the Plate at 7:30 AM 3 comments:

You remember him, right?

I haven't been over to see him since school let out for summer.  I'm aware that we are now about 9 weeks into this school year, so it's been a while since I visited him.  I called him up the other day and stopped by for a quick visit.  He hasn't purchased any big deals since I was there last, but he is looking for a deal and told me he would call me first when he finds one.

He still had a few binders of cards leftover from before, but most of them are stuff I'm not interested in buying.  There are a couple of binders with HOFer autos and some relic cards.  I picked through the relics and got a few to trade and bought three autos, two of which are HOFers.

I'm going to use the HOF autos for a November contest (yes I do remember those too).  I picked out a few cards to show off here and these cost me a 50 cents.  I spent a buck on loose cards, but I'm also saving the other half for another day.

Let me know if you think I got a good deal for my half dollar. 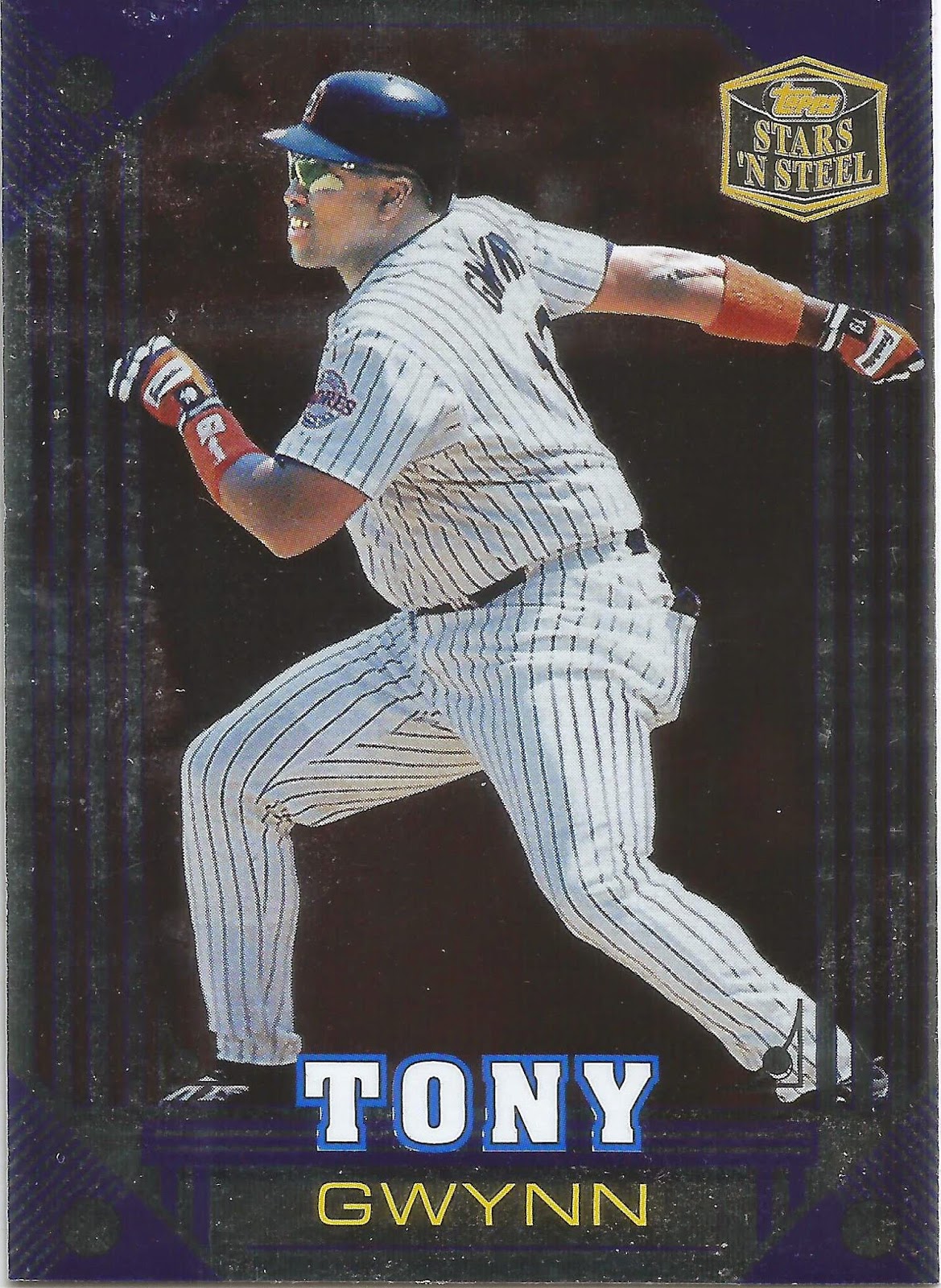 This is a 1998 Topps Stars N Steel Tony Gwynn.  This card should be a registered weapon because it could cut you. 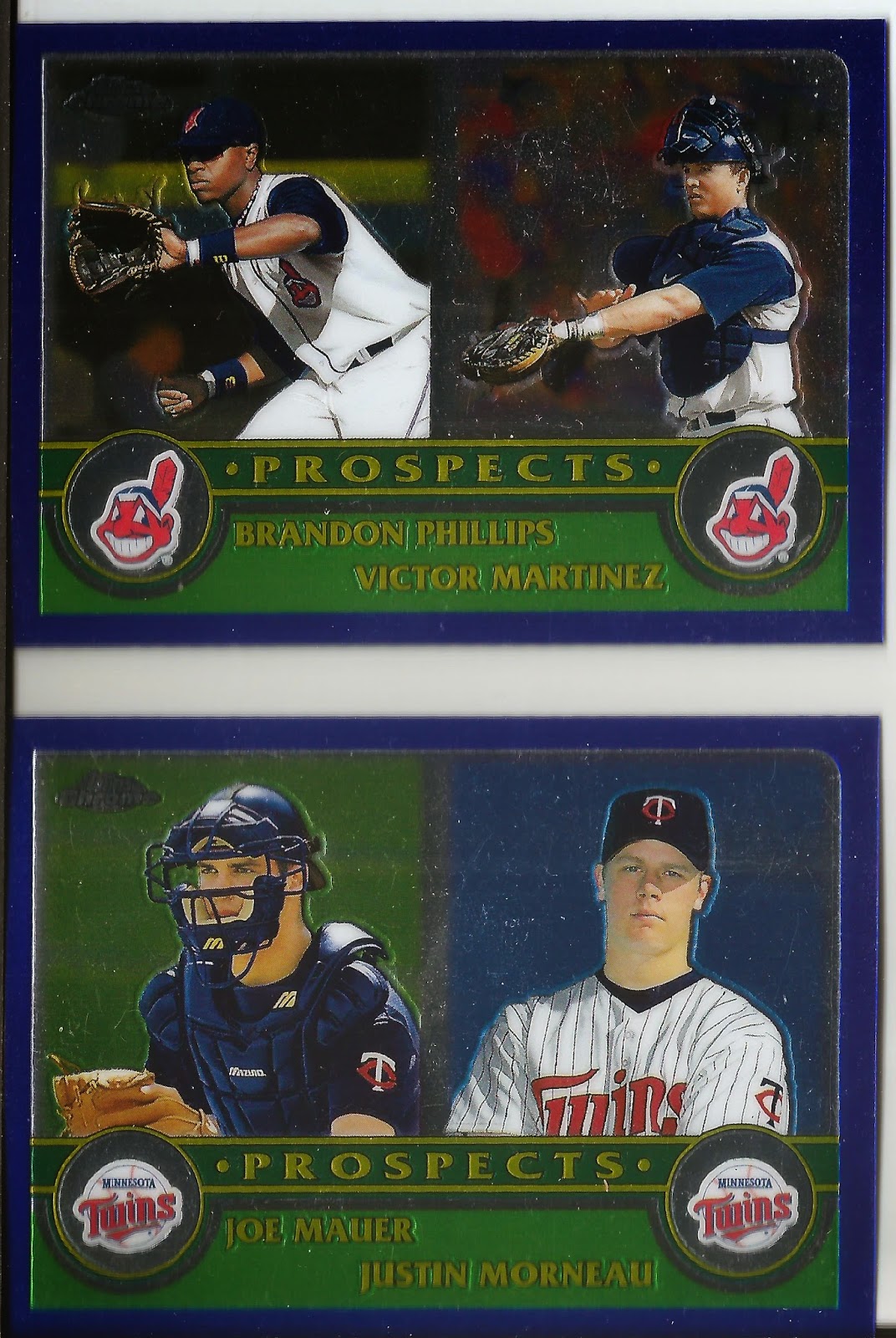 Last, but most certainly not least, we have some sweet catcher prospects from 2003 Topps Chrome. Oh sure, I see Brandon Phillips and Justin Morneau, but we all know I'm more interested in Victor Martinez and Joe Mauer.  I'm especially pleased to have that Mauer card.  I have a lot of Mauer stuff, but not a lot of early Mauer stuff.

I don't know about you, but those 6 cards for 50 cents is a deal I can live with (and use more of when the opportunity arises).

I need some addresses

If you recall the four 5000 count boxes I got from my LCS buddy, you'll also recall a bunch of people asked for cards.  I've mailed out some of them, but I need a few addresses to mail some of the others.

I need addresses for:

Send those addresses.  I'll be hitting up the post office on Wednesday.

I know I owe a few other people packages and I'll be working on those soon.

Posted by Play at the Plate at 5:30 PM No comments:

If your blog has a birthday and you don't notice, did it happen?

October 1st was my blog's 5th birthday and I've been so wrapped up in work that I didn't even remember it.

Seeing as how the actual blogging around here has come to a virtual standstill, I don't know if I can even claim to still be blogger.  I'll keep on claiming the title for the time being and let you know I can see a light at the end of the tunnel.

One of my main problems has been my work schedule.  I've been working three nights and two days each week and to say that's been wreaking havoc on my sleep is an understatement.  I'm trying to adjust, but the good news is that it should only last about two more weeks and then I'll be on days full time.

I've been waiting for 8 years to get back on days and I couldn't be happier.

So, I hope the next year is better than the last few months, but a birthday is a birthday and I'm glad to still be hanging around.

Even if it is by the skin of my teeth.

Five is a fine birthday, maybe even the Finest and with that brief segue, I'll show you the Finest cards Fuji sent me. 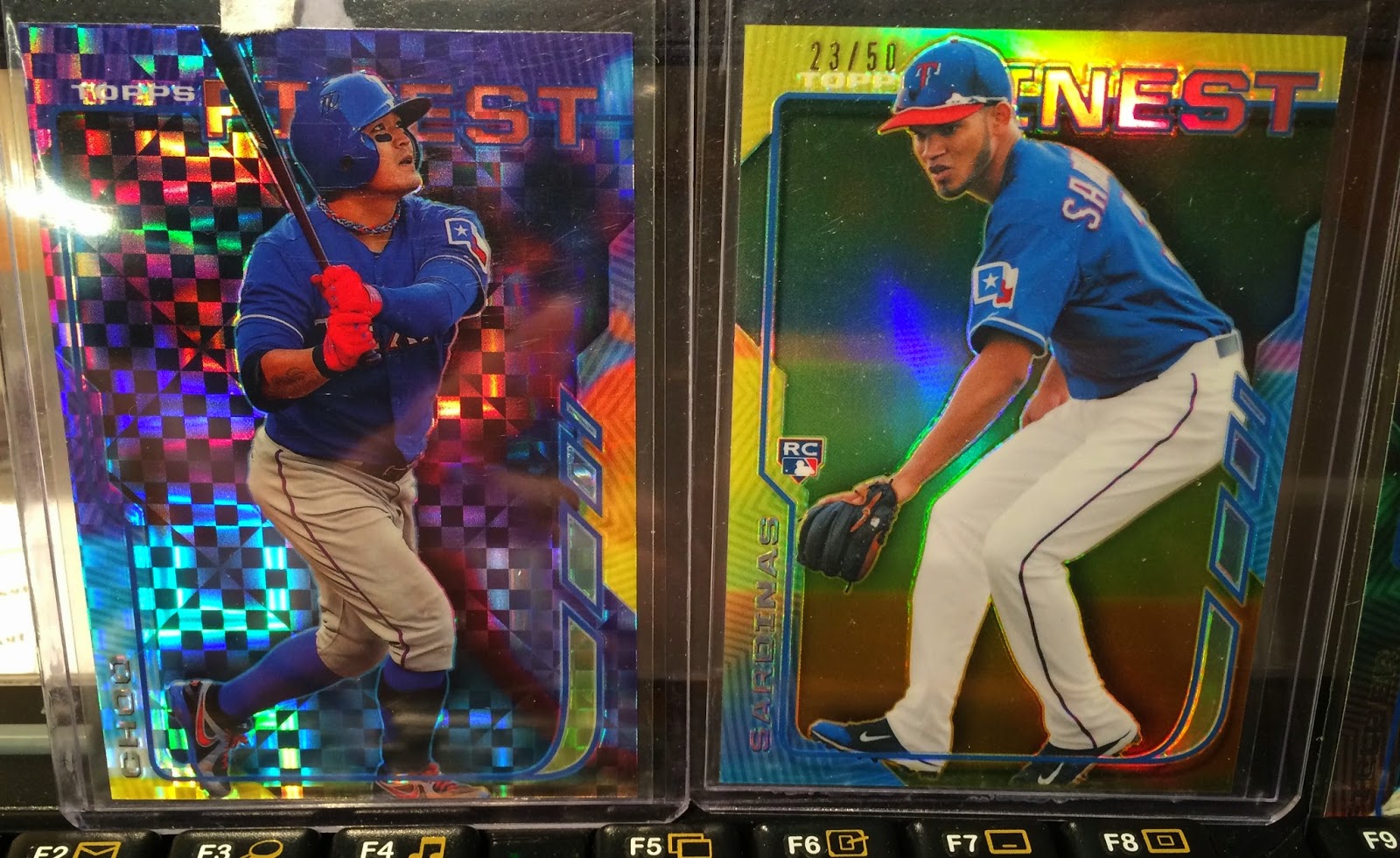 Fuji also sent over the Choo Xfractor and a gold refractor of Luis Sardinas.

Fuji, thanks so much for the cards.  I appreciate them and hope to have something to send back to you soon.

Thanks to everyone for 5 fun years and I look forward to the next one (if not more!)
Posted by Play at the Plate at 7:30 AM 7 comments:

Not all shiny is created equally

My love for Topps Chrome is fairly well documented around these parts.  I generally can't get enough of it.  I'm still working on an insane rainbow attempt for 2013 Chrome Rangers.

My love for shiny doesn't extend as much to Topps Finest.  It's not as much that I don't like it as it is I can't afford it.

One of the last purchases I made on Ebay before the great depression set in around my house was a two card Finest Sampler plate. 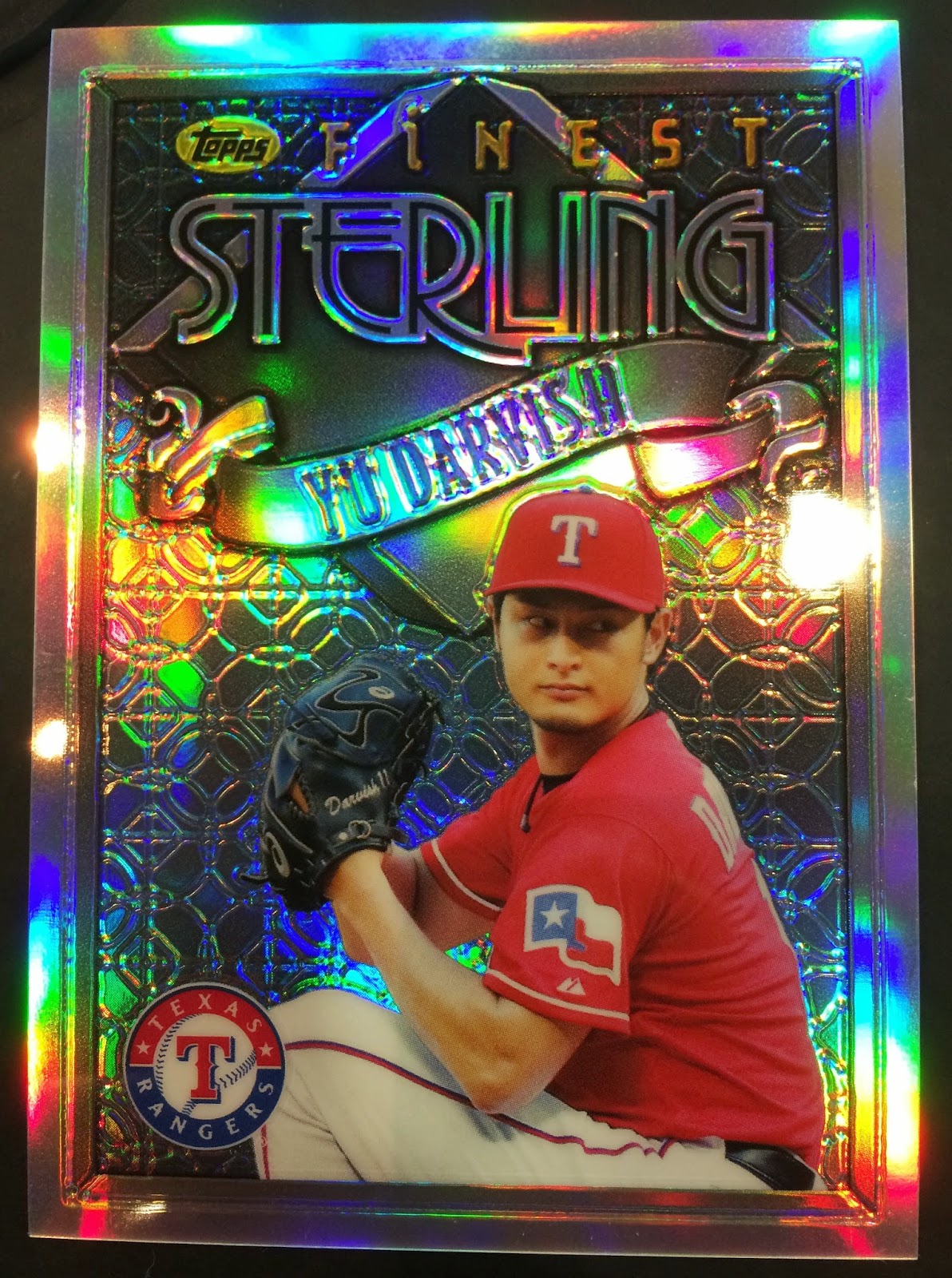 You can't get much shinier than that.  I like these just fine, but my ability to buy cards right now is almost non-existent.  The ratio of player to card does seem a bit off. 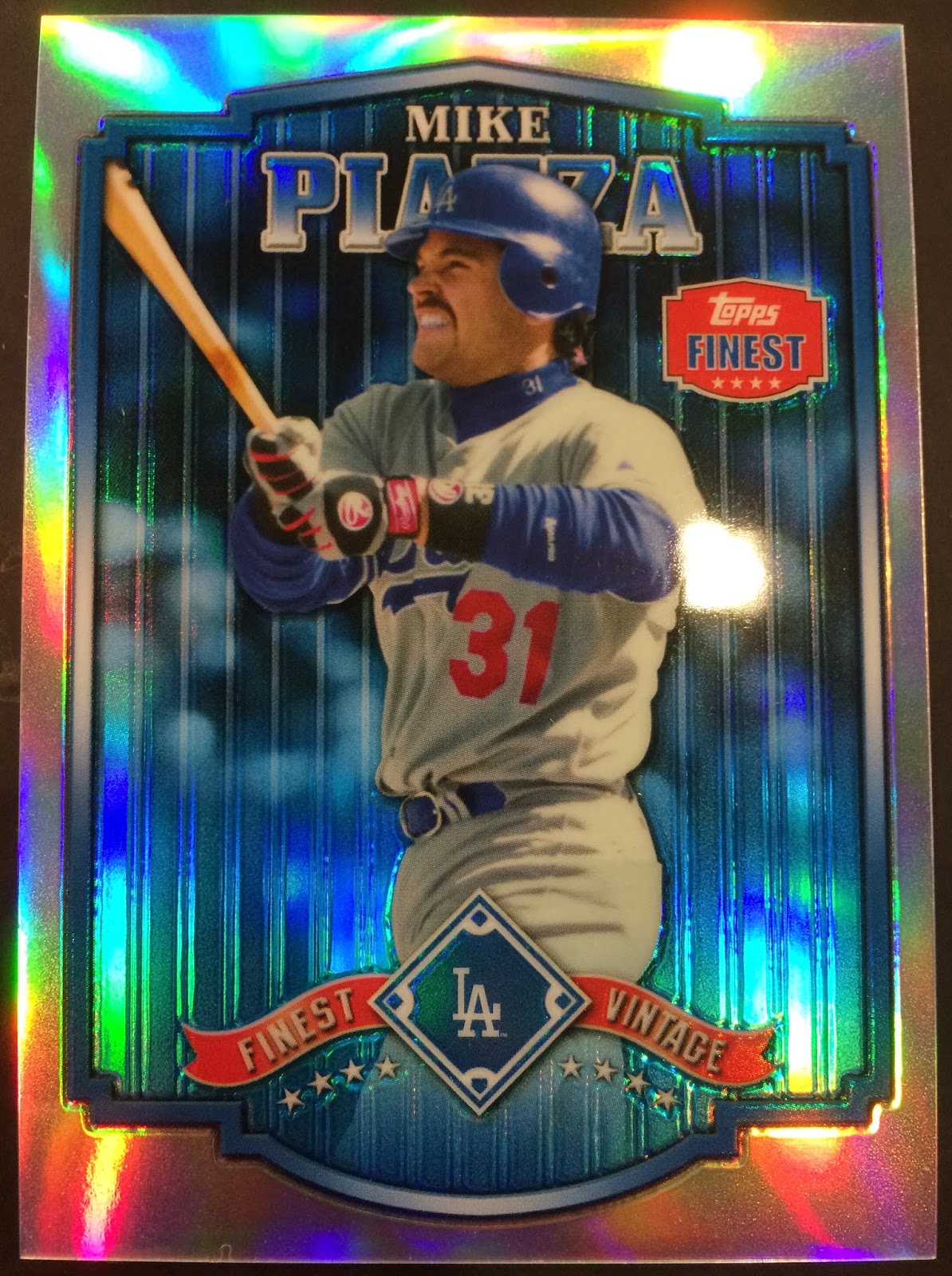 I bought a Mike Piazza from the same seller because he combined shipping.  I'm not married to this one so I may slip it into a Dodgers package sometime.

I'm open to trading for any Rangers Finest cards you may not want.  Have a great Tuesday.
Posted by Play at the Plate at 7:30 AM 3 comments:

I spent last week in Atlanta on a business trip.  It was my first time in Atlanta, but with the Braves not playing, the best I could do baseball wise was the cab ride past Turner Field.  After resting up from the trip, my family and I headed out to the State Fair of Texas after church on Sunday.

The Texas Sports Hall of Fame has a great display set up in the Hall of Texas at the Fairgrounds. They have game used uniforms from Roger Staubach, Bob Lilly, Nolan Ryan and a host of other Texas greats.  The memorabilia in the displays ranges from boxing to Olympics to basketball and everywhere in between.  One of the coolest items was Doak Walker's 1950 college football All-Star game uniform.  Of course, I didn't get a picture of that.

I did get a couple of baseball related pictures. 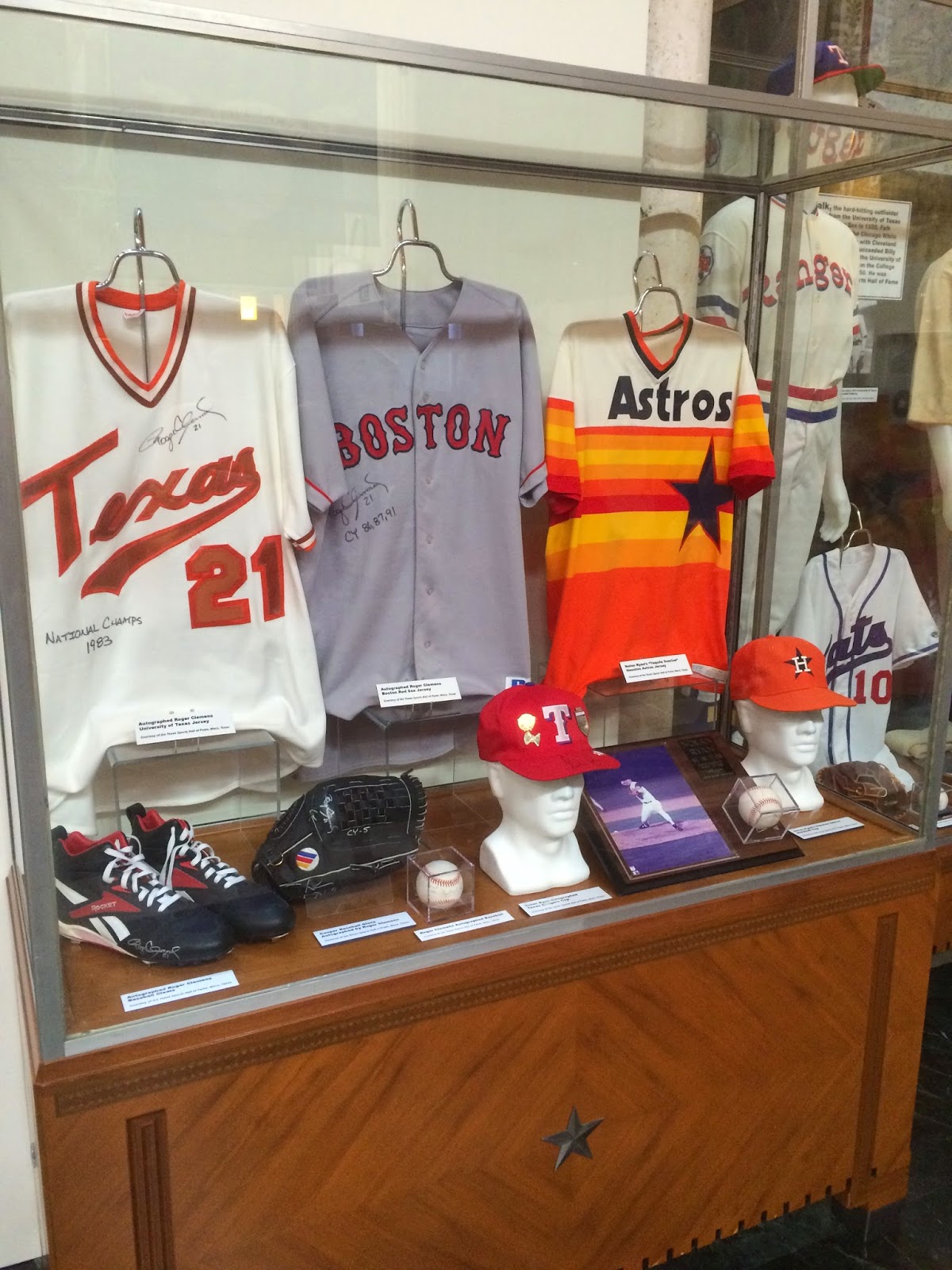 This display had college and Major league memorabilia from Roger Clemens and the amazing Astros jersey of one Mr. Nolan Ryan.  You can just see an old Rangers uniform in the background alongside a Fort Worth Cats jersey. 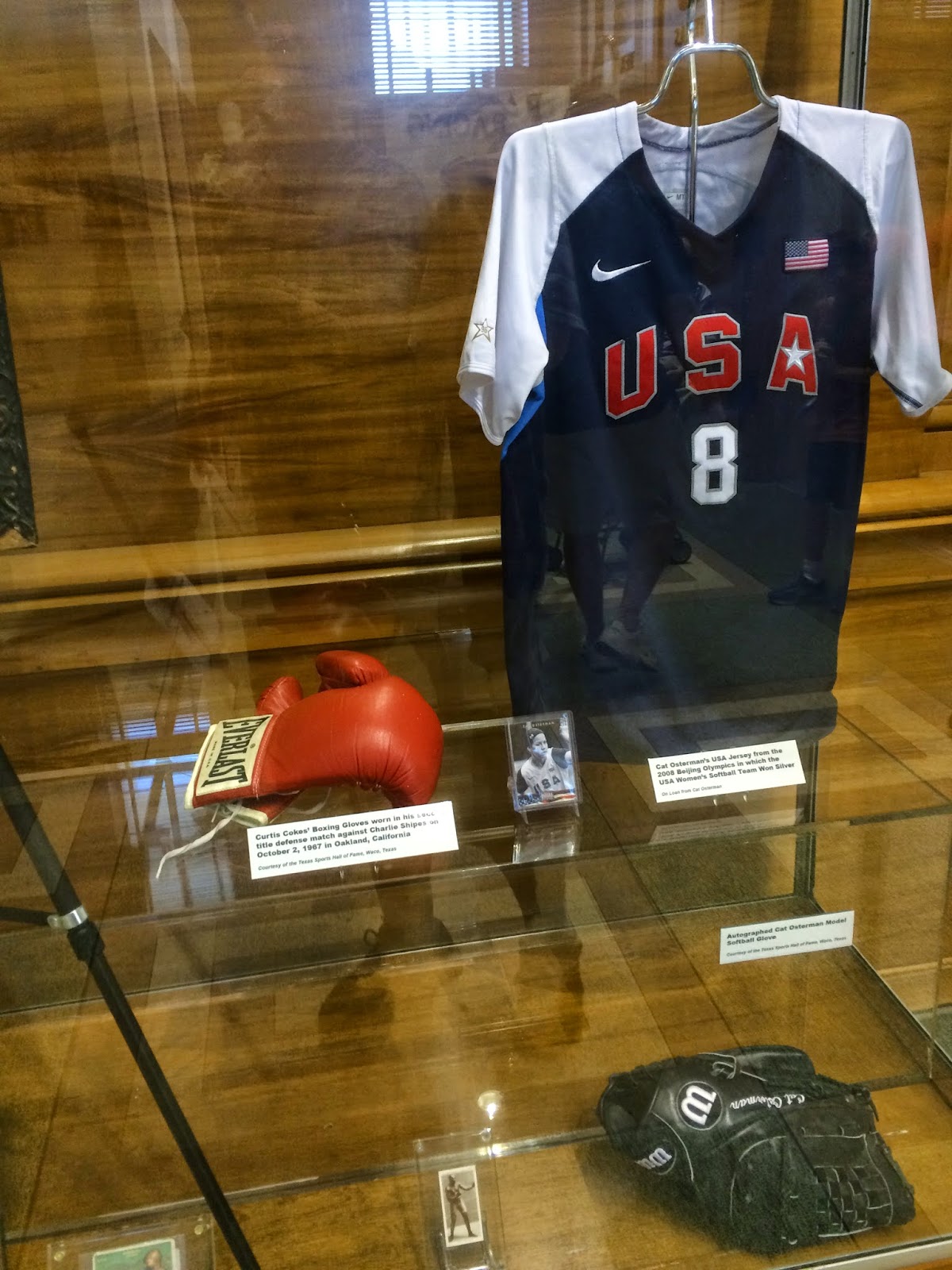 If any of you have the chance to go to the State Fair, I recommend it.  You can eat all those amazingly disgusting fair foods of course, but you can also see some great sports memorabilia.
Posted by Play at the Plate at 7:30 AM 1 comment:

Totally sucking in 2014...well, that's a whole new (old) ballgame.  It kind of reminds me of the majority of my years as a Rangers fan with the exception that I didn't go into most of those early seasons with any realistic hope of a World Series appearance.

You may be thinking to yourself, "This Play at the Plate blog hit my blogroll and it sounds familiar, but I'm not quite sure."  Well, it's me.  I haven't posted since September 17th.  It's the same old excuse.  My new job.  It's taken over my life in a good way and included 4 days in Atlanta last week for a conference.  I'm going to try to regroup over the weekend and get some packages ready to mail next week.  My hope is to start posting on a regular (read daily) basis next Monday. 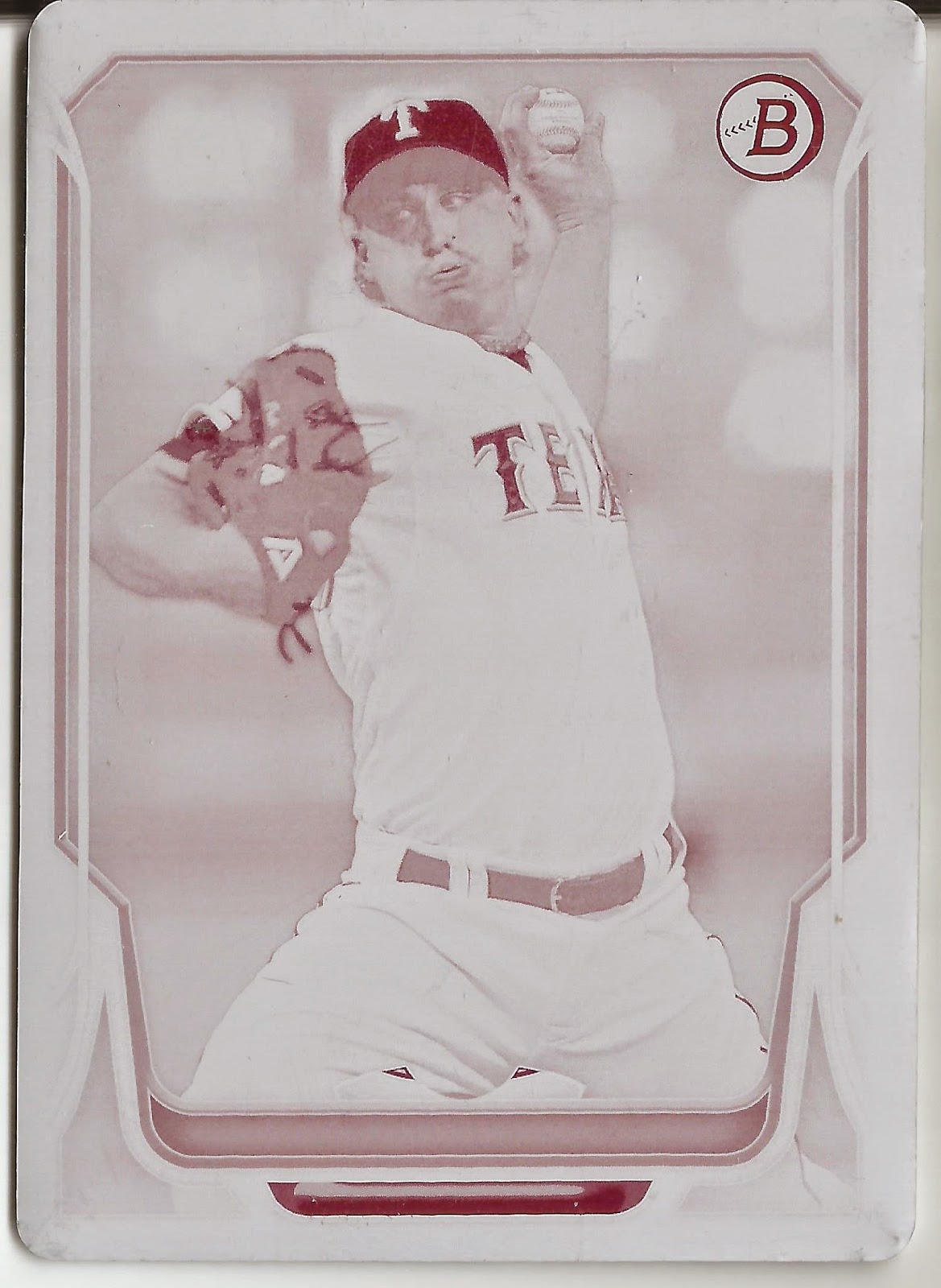 That's a 2014 Bowman Derek Holland printing plate.  I think they call it magenta. 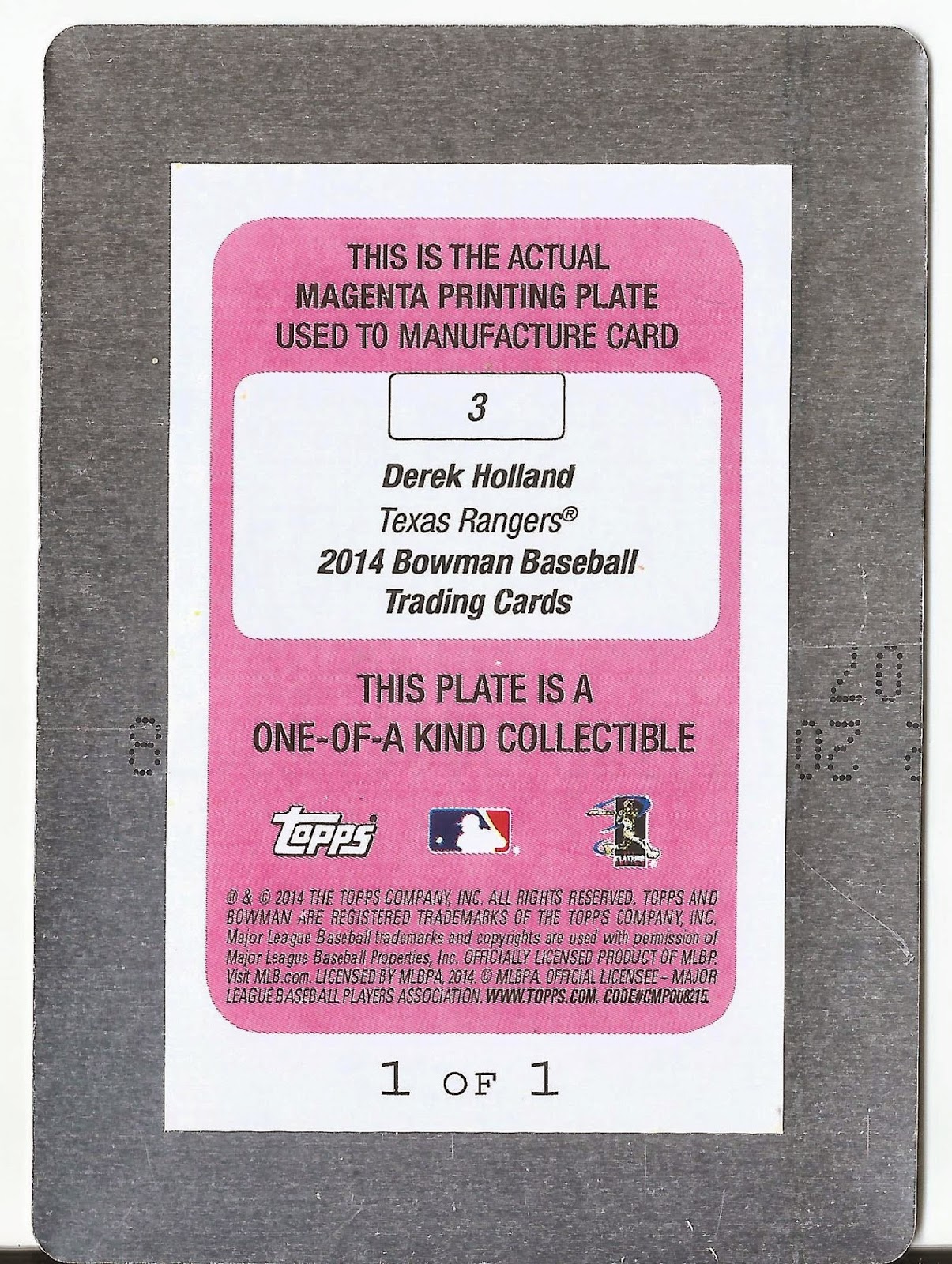 Derek came back at the end of the season and pitched like a man possessed...by Clayton Kershaw.  I hope that means good things are on the horizon for next year.

As for this year's playoffs...I say go Royals and Dodgers.  I'll choose between them if they both make it.
Posted by Play at the Plate at 1:32 PM 2 comments: