Two Sundays in a row

A streak of 2 is pretty long for me these days. Unfortunately this one is not for something good. I find myself at Care United, our local generic doc in the box place, for the second consecutive Sunday. Last week it was bronchitis for me and it ruined my whole week. This week its my youngest son and I'm fairly certain he has the same thing. Fun times.

If there is a bright spot on this Sunday it would be that I have to go to work and cover 6 hours this evening for one of my peeps. That means I can probably get up a real honest to goodness post. I'm also thinking about a contest post for tomorrow.

Anyone interested?
Posted by Play at the Plate at 10:41 AM 10 comments:

Anyone up for a Game?

Everyone likes to play games right?  I didn't know about these 1968 Topps Game cards when I started collecting in 1981.  I remember seeing some over the years, but didn't think much about them because they didn't look like anything I'd ever seen.

Sources tell me they were issued as a 33 card set that came in complete boxed sets and were meant to be used to play a game.  Now that I know more about them, I might need to complete the set.  I picked up these four from my old LCS friend.  They were just in a random box and I got them for practically nothing. 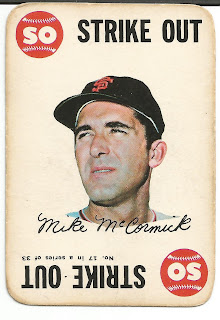 I can take a Giant in my collection if it's vintage.  Or Will Clark.  I do think it's appropriate that this Giant Mike McCormick is a Strike Out. 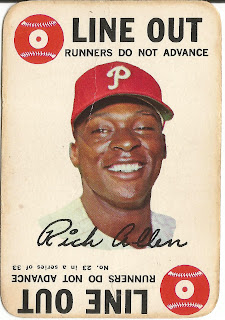 Good old Richie Allen is a Line Out with runners unable to advance! 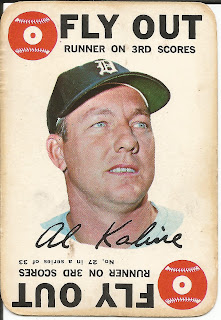 My man Al Kaline at least brought the runner home! 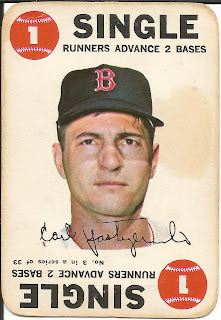 Of course, I had to have these when I saw Carl Yastrzemski.  Yaz was one of the players I collected early on because he was a well established star when I started.  He looks so young there!

When I get around to updating my want lists, I'll add this set to it.  It should be another fun one to go after.
Posted by Play at the Plate at 3:24 PM 8 comments:

Maybe the answer to me blogging again was to get a nasty illness.  This bronchitis is kicking my butt. My ribs are sore from all the coughing and as much as I want to sleep, well, let's just say the getting up part is unpleasant when the coughing kicks in again.  I digress...

We've all pulled damaged cards from packs before.  It could just be one card or every card in the pack might be damaged.  I was looking through a box of cards this morning and ran across the best card I've ever pulled that was "factory" damaged.  Here's a pic of the damage.

The damage is almost dead center running along the top edge for an inch or so.  It doesn't look like your standard crimping that happens when the packs are sealed.  It's much less uniform than that.  It almost looks like it was crushed or dropped.  The odd thing is the damage doesn't show from the back.

I'll admit, when I first pulled this card out of the pack and saw the damage, it didn't really bother me much because it was a prospect card and being the experienced collector that I am, I know most of those guys don't pan out.  I pulled this card back in the day when I was the hit man.  You know the type.  I'd bust a box of cards only looking for the hits.  Unlike a lot of those guys, I did NOT leave the commons or non-hits behind for the store owner.  I just left the cards in the packs, the packs in the boxes, and the boxes in a big storage tub.

It was a couple of years after I pulled this card from a 2001 UD SP Game Used Edition pack that I was going through those already opened packs and I ran across this guy who was bashing the ball. 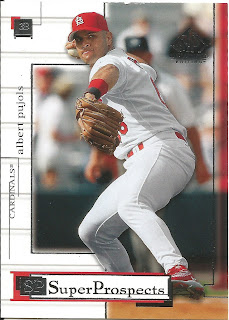 You might have heard of him.  One Albert Pujols.  You can clearly see the damage up there just to the right of his cap. 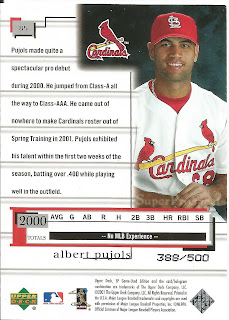 This Super Prospects card is #388/500.  I never looked up the "value" of this card because I didn't want to be disappointed that the damage would forever ruin that.  As it is, I have a fairly limited rookie card of a player from a team I don't like, but who should go in the Hall of Fame. I guess that's something.

Bunting will drive you crazy

* I'm at home with bronchitis.  This post has been a work in progress over the last 8 hours.  I scanned, went to bed, cropped, went to bed, uploaded, took a nap, and now I'm hoping to write something semi-coherent. Here goes nothing.

I spent a grand total of 10 minutes looking for cards of Rangers bunting.  I thought it would be easy, but after going through quite a few cards, I only managed to find four.  Let's take a look and find out if a Bunt is worthwhile or not. (If you're not interested in these Bunting cards, you still might want to read to the bottom). 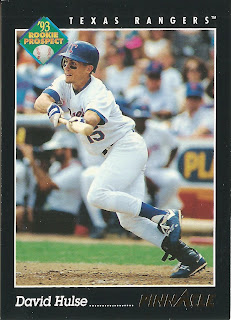 First up is this lovely 1993 Pinnacle David Hulse.  I really cropped it too close for you to get the true effect of chipping on the black border.  David played parts of 5 seasons in the majors from 1992-1996.  The first three years were with my Texas Rangers and the last three were with some Milwaukee club. 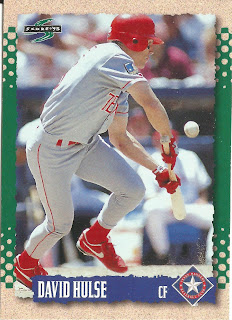 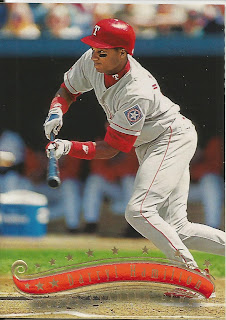 Darryl Hamilton played 13 seasons in big leagues, but only one with Texas.  It was 1996, the year of the Rangers first ever playoff appearance.  Darryl had 7 sacrifice bunts and 6 bunt singles in 1996. 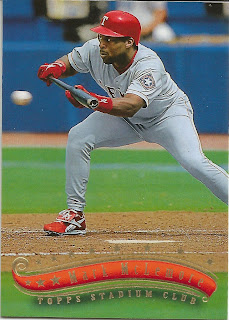 Our final bunt card is this nifty Mark McLemore.  Mark was one of my favorites when he was a Ranger and he still works for the team doing post game and sometimes in game TV work.  Mark played for 19 years, 5 with Texas.  He had 39 sacrifice bunts and 16 bunt singles for the Rangers.  He also stole 83 bases in Texas and 292 for his career. Not too shabby.

The thing about the Bunting cards above, even given the stats, is that there is no way to tell if any of these was a bunt single OR a sacrifice.  They could just has easily, and honestly, more likely have been foul balls or run of the mill outs.  Not knowing makes me a little crazy since I love to be able to figure out the game.

However, I wrote all of that, not to talk about bunting cards, but to talk about BUNT cards.  You know, the Topps app where you get digital cards.  I jumped in head first last year, even though it's the most inane thing really.   I spent a little money early on, spent a little more in the playoffs ended up winning one of the REAL LIVE ACTUAL PRIZES!  The top 100 Bunt players in the Playoffs won a real prize to cover the sorrow of having all those digital cards you could never get your hands on.  My prize for 24th place was this: 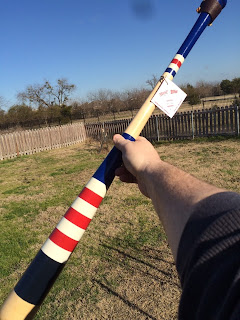 It's a beautiful hand painted bat from the Mitchell bat company.  The kind that sell for $245 on their website.  I got my choice of bats and picked the one that was most patriotic.  It says it's #2, but I don't know what that means.  Anyway, playing Bunt is a beatdown if you've every tried to do it competitively.  The problem is you don't just set a lineup.  You can move players in and out of the lineups ALL DAY AND NIGHT depending on their game.  You basically have to watch every game on the computer and move hitters in when they homer or steal or triple or blah blah blah.  It's mind numbingly hard to do it and be competitive.

That's why I won't be doing it again.  But I'll always have this beauty to remind me how it feels to beat your head against the proverbial wall and win a real prize.

"Time" for a rebuttal

Have you ever seen a speaker, read an article or heard a sermon where you thought the speaker or writer was talking directly to you?  It happens to me from time to time.  I've been mulling over the idea for this post since December 17th. That's when I read a post entitled "Time" by the one and only Night Owl.   As with almost all Night Owl posts, it was on point and well written.

As I usually do with his posts, I read through it a few times.  I read this one even more because at the conclusion of my first time through, I thought "he's talking about me".  I really felt the weight of his words on me.  The more I read it, the more I felt that way, but understood he was probably referring to a number of people.

I also thought he didn't know what he was talking about. I am busy.  I don't have time to blog.  I DO want to blog.  Then I really started thinking about it.  Maybe I am busy, but I could find 10 minutes in the day to write a post.  Maybe I just don't have the same desire to blog that I use to have.  Maybe the time thing really is just an excuse.

I'm going to make a concerted effort to post more often in 2016.  Well, not so much for the first three weeks of 2016, but you know, all the other weeks.

Speaking of the Owl, he sent over some goodies so let's see some of them. 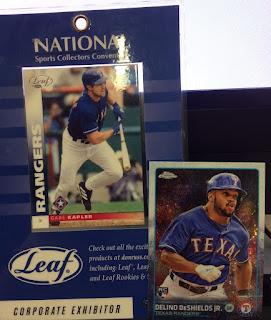 I've never seen anything like this before so it's a really cool oddball of Gabe Kapler.  This is a Leaf Corporate Exhibitor badge from the 2012 National Convention.  I put the sparkly Delino Jr. next to it so you could see the size difference. 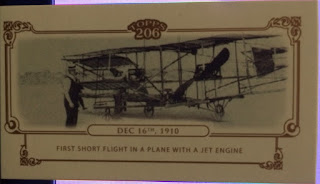 I love minis and historical minis are the best.  This is a 2010 Topps 206 First Short Flight card.  Such a nice plane on such a small card. 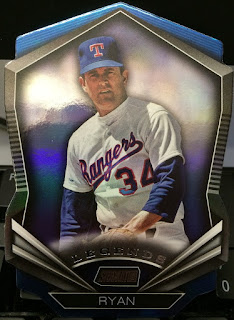 There is nothing small about Nolan Ryan and this 2015 Stadium Club Legends die cut card is awesome.  The pic has been used repeatedly, but I'm down for anything with Nolan on it. 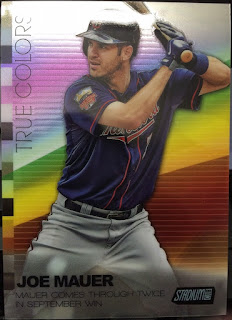 How about some True Colors Stadium Club?  I have opened maybe two of these packs and didn't see anything as nice as this Joe Mauer.  Is it possible to collect a "rainbow" all in one card? 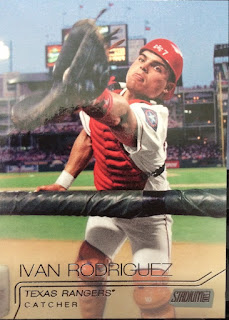 So this must be the best 2015 card right?  I'm sure someone has done a comparison already and I may have actually read one or two of those posts, but I love this pic.

Not much of a rebuttal post, mostly because I agree with what Greg said.  So with 9 days left in the month, let's see how many posts I can write.

And maybe, a February contest for old-time's sake?  We'll see if anyone reads this post first.
Posted by Play at the Plate at 1:39 PM 7 comments:

I kid you not, it took me 10 minutes to come up with that post title.

I recently bought a trio of 2015 Topps Triple Threads cards because I needed wanted one of them that was numbered 8/18.  I'll eventually get around to posting that one, but I thought someone out there in blogger land might be interested in the two that I don't want. 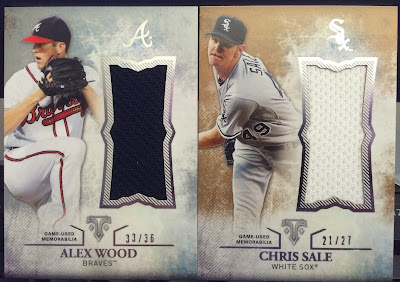 I would like to thank the people who follow me on Twitter for the prayers and thoughts for our family.  My step-father suffered a massive stroke on December 30th and I was with him when he passed away just after midnight on January 8th. Seeing him breathe his last was one of the worst moments of my life.  Just know that I am thankful my mother and his son didn't have to be there to see it.  Thanks again to those of you who DM'd me.  I am forever grateful.
Posted by Play at the Plate at 8:00 AM 18 comments: