My first #Supertrader package showed up last week…or early this week.  I can’t remember, but I do know I was impressed.  Wes of Jaybarkerfan fame started it, so I guess it was only proper for him to kick off the trade packages as well.  I was fortunate enough to get a hit out of the 2013 Topps Museum Box he broke for the group.  It also inspired me to break a box of my own for the group, which you can see here if you missed it.

I will be working on getting a package or PWE out to everyone in the group by the middle of next week.  I also have some packages for other people too, most notably…well, I’ll surprise you.

Wes sent over a great package of cards in addition to my hit from the box.  It got a little colorful around here with the red, gold, and blue cards.

I really do like those Topps Gold cards.  I say that because I don’t have many of them. 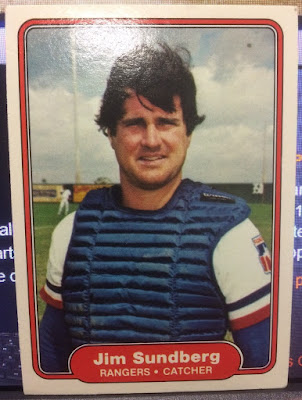 I also got this cool 1982 Fleer Jim Sundberg.  That’s about the most basic chest protector you could get.  No fancy designs or colors.  But it is ribbed for Jim’s pleasure.

Everyone has their own definition of vintage and for me it’s anything pre-1981 Topps.  That’s when I started collecting and anything prior to that is stuff I didn’t see much of for a while. 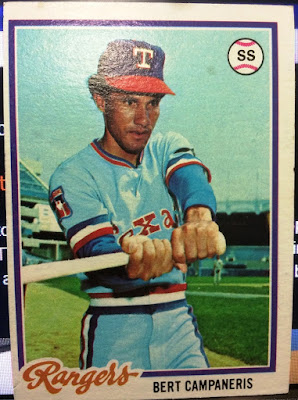 That makes this 1978 Topps Bert Campaneris vintage in my book. 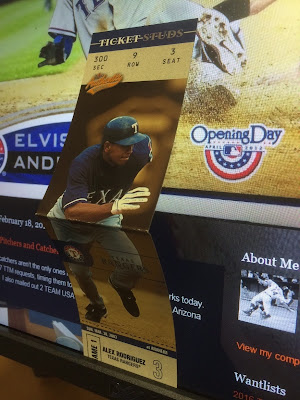 I don’t generally like my cards creased, but apparently that was the way this was designed so it’s ok.  However, I do take issue with the Ticket Stud part.  More like a Ticket Dud.  Not for the numbers he put up, but he was a jackass. 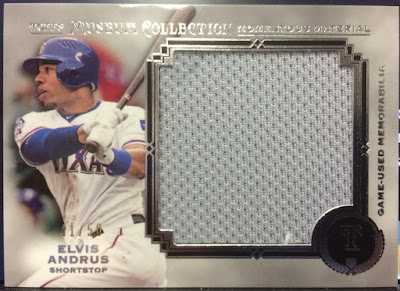 Finally, the hit from the Museum Box.  I was fortunate for Wes to pull this jumbo relic card of Elvis Andrus, #41/50.  I have a few of these and one of my is really dirty (the swatch, not anything else).

Thanks for the great package and the whole idea for the #Supertraders group.
Posted by Play at the Plate at 7:30 AM 9 comments:

I know you are all waiting with unbridled anticipation to see how many TTM requests I sent out this year.  I did a post on it earlier, but I’ve since added quite a few to the list.

As of yesterday (2/24), I have sent out 56 TTM requests.  48 of those are baseball requests and 8 of them are TEAM USA requests.  I may have a few more baseball to send out, but I know I’ll have many more TEAM USA once I get a little time.  Speaking of time, I’m working on sending out packages/PWEs to the Supertraders group, but that’s another post.

The reason I’m writing this TTM update today is because I got my first envelope back today.  In just 9 days, I got back three signed cards of one of the longest tenured Rangers around: 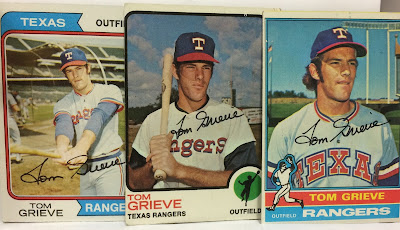 Tom Grieve played for the Senators (1970) and the Rangers (1972-77).  He also had brief stints with the Mets and Cardinals in 78-79, but he’s best known for being part of the Ranger family.  After retiring as a player in 1979, he joined the Rangers front office and did some work on the TV broadcast in 1980.  He served as the Rangers GM from 1984-94 and has been doing TV color for the Rangers since 1995.  I love hearing Tom on the broadcast.  His voice just says Rangers to me, just like his radio counterpart Eric Nadel’s does when I’m in the car.

Thanks for making this old Rangers fan’s day Tom.  Keep up the great work!
Posted by Play at the Plate at 4:42 PM 3 comments:

Move over Pitchers and Catchers...

Pitchers and catchers aren’t the only ones reporting to Spring Training ballparks today.  I mailed out 27 TTM requests, timing them to begin arriving in various parts of Arizona today as well.  I also mailed out 2 TEAM USA requests, but on the same day. 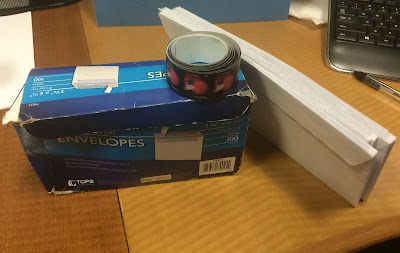 (This is the aftermath of my first batch.  I need more envelopes.)

I’m in the process of getting together a second batch to mail out.  This will be mostly TEAM USA athletes, but I’ll have a few more baseball requests mixed in.

I’m working on a 2015 TTM request recap post so I hope you’ll enjoy reading that as much as I enjoyed all the TTMs I got last year.

Good luck to all those who are sending (or have sent) TTMs this year.
Posted by Play at the Plate at 4:05 PM 7 comments:

You've all seen THE Bat Flip.  You were probably watching the game live like I was.

The epic 7th inning of game 5 of the ALDS.

You can read an excellent write up of the game here.  In a nutshell, the Rangers took the lead on the play where Russell Martin's throw back to the mound hit Shin Soo Choo in the batters box and rolled away.  Rougned Odor scores, chaos ensues and that half of the inning took forever.

Move to the bottom of the 7th inning and the Rangers melt down, with three errors on three consecutive plays.  Another miscue, but not an error, by Odor and the game is tied again.  That brings up Jose Bautista who eventually hits a three run bomb that was the difference in the game.

As soon as Bautista hits the no doubt homer, he gives the epic bat flip that Topps immortalized on his 2016 card. 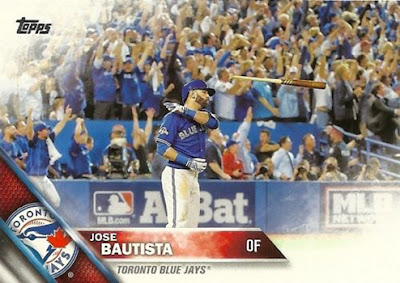 No one is a bigger Ranger fan than me.  No one.  No one yelled louder at the TV when Bautista hit the homer.  No one.  However, I never thought for a single second that the bat flip was wrong.  I never thought it was disrespectful.  In what was the biggest moment in his career to that point, Bautista hit a bomb that put a cap on a 53 minute, insanity filled inning.  It was an epic moment for him, for the Blue Jays and ultimately the nail in the coffin for the 2015 Rangers.

I do think the "4th inning, we're down by 7, solo shot" bat flip is stupid.  I think this one was the frosting on the cake that was the Blue Jays comeback in that game.

Now, can we just get Spring Training here so I can look forward to something instead of back at this?
Posted by Play at the Plate at 7:30 AM 15 comments:

You read that right.  And no, for once I'm not talking about the Night Owl.

I bought a couple of things from Blowout, including the box I broke for the Super Traders group. They were running a sale in conjunction with the BIG GAME and they call it the Superb Owl since they don't want to get sued.  For my purchase, I was awarded two spots in one of their 30+ boards. The lucky randomizer gave me the numbers 4 (AFC) and 0 (NFC).  Thanks to a two point conversion from ol' Peyton Manning, I won the last quarter.

My prize is pictured below. 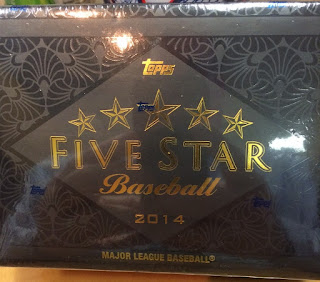 My dilemma is that I've searched Ebay for sell prices on these cards and unless you get very, very, very lucky, you are not getting your money's worth.  However, it didn't cost me anything so I'm tempted to open it.

I was tempted to open it I mean.  I listed it on Ebay.  I have a high buy it now price and I already have an idea of what the money will go for, even if I only get half of my price.

I'll always wonder what was inside, but I'll never regret knowing what I got instead.

My 2016 Topps Series One Wantlist:

If you watched the video for yesterday's box break, you saw that I pulled a triple relic with David Ortiz, Justin Morneau, and Mark Teixeira,  I needed to random this cards between the Red Sox,
Twins, and Rangers. 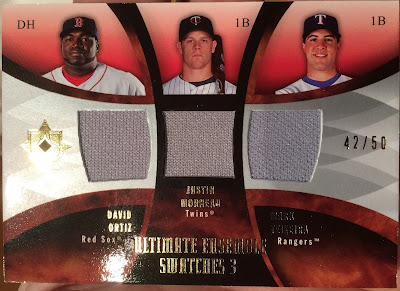 Since I have a vested interest in the outcome, I asked Wes from Jaybarkerfan to do the random for me and send me a screen shot.  He did and this is the result... 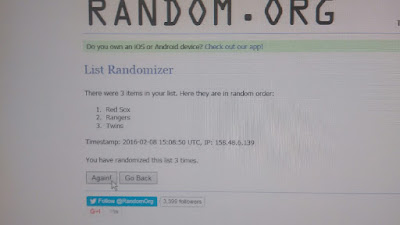 Congrats to Mark Hoyle for getting the triple swatch card!

I'll get all these cards mailed out next week.  I'm trying to find some stuff to go with them.

I bought a box to break for the Super Traders group that Wes of Jaybarkerfan put together.  If you're not in that group, please don't think I won't send you cards, because I will.  I sure will.

Ok, on to the video...and I'll tell you now that one of the hits has to be randomed.  I will post that tomorrow.


Please pardon the extra stuff that came from me pasting the link.  I can't get it off the screen.

I finally found some 2016 Topps today and I bought a lot.  Well, I had two $25 Target cards so I bought two blasters and 4 hangar boxes.

We had two correct guesses of Chris Colabello.

CaptainKirk42 and Jeff.  I randomed their names three times as is my custom and the winner is... 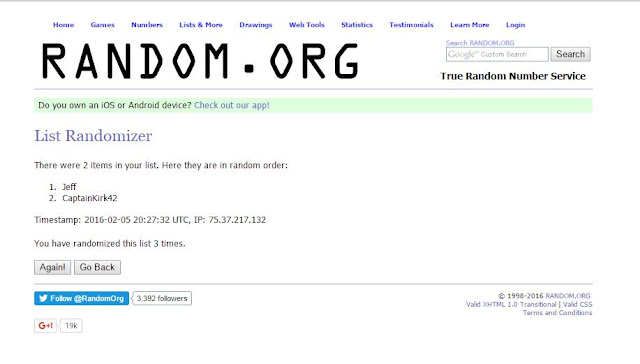 Congrats to Jeff.  Let me know if you want me to mail a hangar box your way or just the cash to buy your own.  Kirk will be getting a consolation prize as well.

Thanks everyone!
Posted by Play at the Plate at 2:33 PM 3 comments:

I still haven't found any 2016 Topps...so the contest is still open

I hit two Targets and two Walmarts yesterday with no luck.

I'll be hitting up the same two Targets today so...you still have a chance at the contest.

Good luck!
Posted by Play at the Plate at 2:43 PM No comments:

In order to kick off my participation in Jaybarkerfan's Super Traders group, I've ordered a box of my own to break.  It should be here tomorrow and I'll video the break and post for all to see.

I know the box breaking isn't a requirement, but I enjoyed the way Wes kicked this whole thing off and seeing as how he pulled a Ranger for me, I hope to return the favor in my box.

I'll keep the box a surprise, but it's supposed to have multiple "hits".  I just hope it's not a dud box!

I know I don't have addresses for all the people in the Super Traders group so if you're in the group and you read this, please email me your address!

It has been a long time since I've done a contest. I used to do them on the first of every month. Since Topps is about to drop 2016 Series 1 on us, let's do the contest like this.

The Prize: A 2016 Topps Series 1 Hangar Box. (Or the cash so you can buy your own and save me the shipping hassle).  IF my first card is a Ranger, I'll up the prize to a blaster.

The Game: Guess the first card I pull from my first pack of 2016 Topps. All you have to do is look at the checklist and pick a name from the list. You can have 5 guesses EACH day until I get my 1st blaster. If you give the contest some pub on your blog, you can have 8 guesses per day.

The same name can be used more than once and I'll randomize all the people who have the right name to get a winner.