Like many of you, I've received actual cards of bloggers in trade packages.  It's possible that I have a few more somewhere, but hey, I'm writing a blog post, so I'll just enjoy that while I can.

First up on the list is a guy everyone knows and loves to read, the Great Fuji, writer of The Chronicles of Fuji.  I've received at least two (there may be another hiding somewhere) cards of Fuji, both signed in red.  Fuji's cards are great.  The card stock is Chrome like.  The 2008 design and colors are great and although I never watched more than a couple Southpark episodes, I do get the reference. 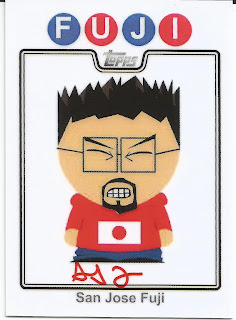 The first Fuji card was signed with a fine point Sharpie. 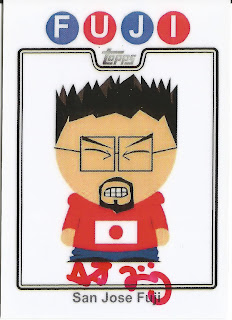 The second was signed with the regular tip I think.  I do think the red auto goes well with the colors. 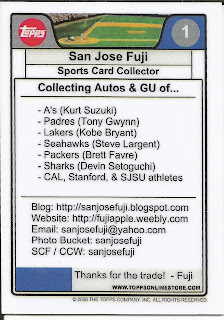 As you can see from the back of the card, Fuji has a wide a varied interest in cards.  Some of my favorite Fuji posts include his many and varied finds at the flea market.

Next up is a very generous blogger, JayBarkerFan.  He hasn't posted in about a month (I'm not criticizing...look at my number of recent posts),  but when Jaybarkerfan's Junk gets a post, it often times leads to a crazy generous mailing of cards across the blogosphere. 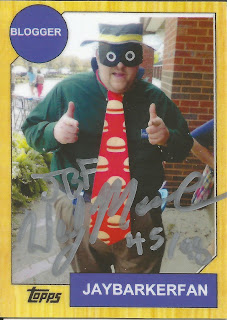 Love the auto on the front and the hand numbering, 45/98.  I don't know if this is the Hambugler variation, but I love the whole design. 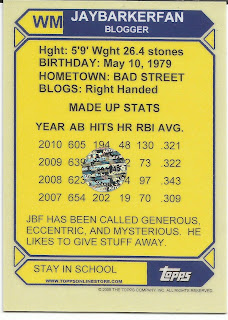 JBF was a pretty damn good hitter and with power too!  He is generous, obviously eccentric and yes, he does give a lot of stuff away.  In case you were wondering, 26.4 stones is 369.6 pounds.  I can relate.


Last, but not least is the one and only Topher, of Crackin' Wax fame.  Topher has a side gig called Varsity Trading Cards.  It's pretty cool. 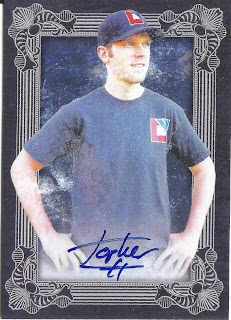 Topher is a wax breaker of the highest order.  He has some pretty cool case breaks, many of which lead to healthy donations to charity.  So far he's donated over $5000 to charities.  That is very cool. I love the card.  I like to think he's staring off into the distance and thinking "Man, I should really pull some cool Rangers for Brian".  Hey, you never know. 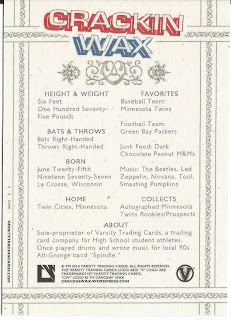 The back of the card is also very cool.  I know you could easily bribe him with some Dark Chocolate M&Ms.

Rumor has it there is a Literal Quirk autographed card (that's his wife).  That's the one I really need to make the collection top notch.

Well, there you have it.  Some pretty cool blogger cards.  If any other blogger has one, I need to make a deal to get one.

Have a Happy Thanksgiving.
Posted by Play at the Plate at 8:00 AM 6 comments:

To all of you who have, or are, serving our country, I salute you and say thank you from the bottom of my heart.  I count my service in the Navy among the highlights of my life. 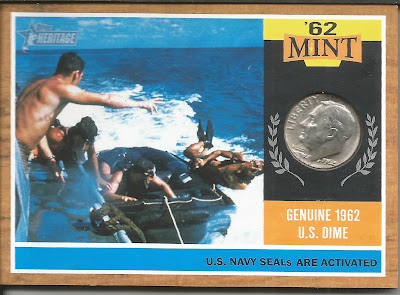 Your sacrifice and duty to all of us does not go unnoticed and I know I share the thoughts of many that recognizing you should not be relegated to one day.

God bless you, whether your standing watch on a wall, in the air, in the sea or back home.