Play at the Plate 2: Eddie Perez vs. Vladimir Guerrero

This is the second in a series of play at the plate cards.

It's the top of the 7th inning and Henry Rodriguez hits a one out single. Vladimir Guerrero steps in against Greg Maddux and smacks a double to deep center. Rodriguez holds at 3rd base. Doug Strange comes to the plate and hits a drive to deep right center field. Michael Tucker uses his good speed to track the ball down. Rodriguez scores easily and I'm not sure what happens, but the ball is deep enough that the third base coach sends Guerrero to try to score from second, leading to this... 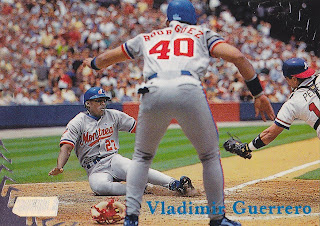 Guerrero slides in safe at home, beating the tag of catcher Eddie Perez. Two rbi sac flies aren't unheard of, but they are uncommon. The Braves would go on to win the game 3-2, with these two "Strange" rbi's the only runs of the game for Montreal.

Normally, I might be a little disappointed to have Henry Rodriguez's backside in the center of the shot, but knowing that both Rodriguez and Guerrero scored on a sac fly more than makes up for it.

Winner of this battle at the plate: Vladimir Guerrero

There is a Rangers connection on this card as well. Doug Strange was a former Ranger and Guerrero will be a Ranger this season.