A Pregnant Package from Cards on Cards

That's a catchy post title if I do say so myself. Allow me to explain. I opened this package from Kerry over at Cards on Cards and guess what happens? It birthed another package. That's right, out falls another, smaller padded envelope. It seems Kerry had the wrong address (by one digit) and the original package was returned to him. He just put that into a bigger envelope, stuffed in a few more cards and sent it on it's way. Before the blogger who won't be named falls asleep reading this, I'll get to the cards Kerry was kind enough to send over.

Kerry included a bunch of Rangers minor league cards, which was the starting point for this trade in the first place. 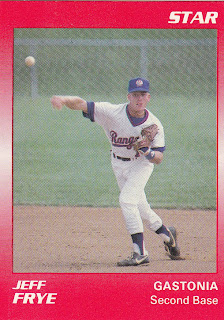 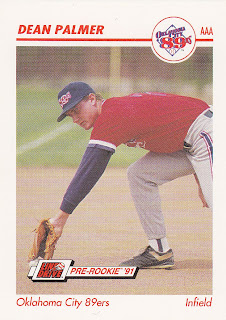 Only Dean Palmer's mom and....wait, I did that already. I really do like this 1991 Line Drive Dean Palmer. Notice that he is a "Pre-Rookie". He is. It says so on the card.
I have to say this next card made me laugh. Out loud. 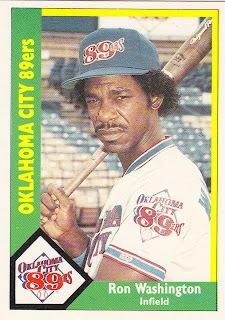 This is a 1990 CMC Ron Washington card. Yes, that Ron Washington. The one who is the current manager of the Texas Rangers. I laughed because except for the shorter hair, which is still close, Ron looks the same in 1989 as he does in 2009. Unfortunately Ron never played for the big league Rangers although he did spend 10 seasons as a utility player for the Dodgers, Twins, Orioles, Indians and Astros. This isn't the best comparison card, but here is modern day Ron. 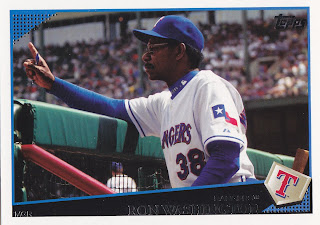 I'm almost 100% sure Ron was ordering a Miller Lite. 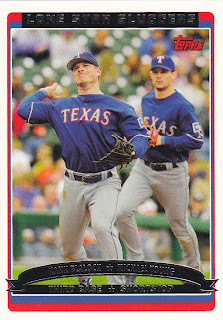 I know this 2006 Topps card is highlighting Hank Blalock and Michael Young as Lone Star Sluggers, but it's the picture of them in the field that is intriguing. The stands are behind them so it looks like Hank is heaving the ball into the stands behind first base. Michael must have been backing Hank up on a play or popup and if you can see Hank's eyes he is looking upward. I'm sure it's just an odd moment frozen in time by the photographer and doesn't mean anything. I mean, Hank only made 11 errors in 2005 and I don't think he threw the ball into the 23rd row on any of them. 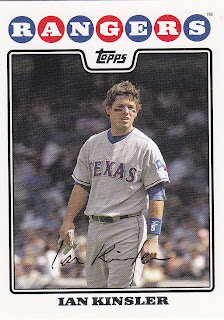 2008 Topps Ian Kinsler. Worst. Ian. Card. Ever. I challenge you to show me a worse picture of Ian. And if you have one, I don't think I want to see it. 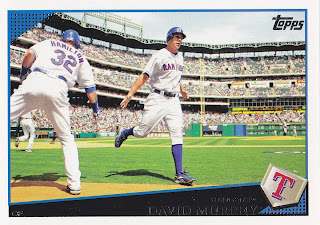 We go from the worst picture of Ian to the BEST card photo of 2009. Raise your hand if you're tired of seeing this card on any blog, much less this one. I see you...and you...but mine is not raised. As a matter of fact, the only thing keeping me from putting this shot in the redesigned header for this blog is the fact that half of you would stop following my blog and the other half would never trade with me again. 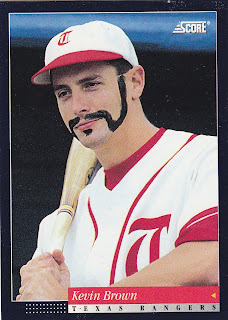 Now to one of the best cards of one of my least favorite Rangers ever. This 1994 Score Kevin Brown is just fun. I typically like retro uniform cards and I really like these uniforms. There are quite a few different Rangers in this uniform and several of them have been posted on this blog.
This card makes me dislike Brown just a tiny bit less than a few minutes ago. 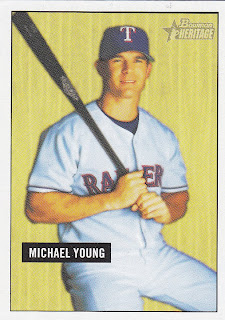 Let me introduce you to the 2005 Bowman Heritage Michael Young the magician card. You'll notice the Michael the Magnificent is able to "hover-sit" without aide of a stool or chair. 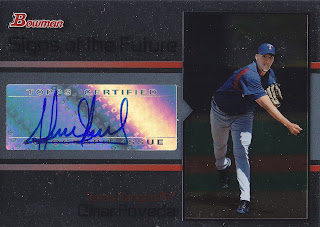 This 2008 Bowman Omar Poveda Signs of the Future card doesn't work on so many levels. For starters, the silverish background is so shiny you can't really look at the card for long without hurting your eyes. Of course, it's Omar Poveda, so you're not going to spend too much time looking at the card. The reflective sticker is too shiny and the to top it off, the sig is cut off a little. The scan actually looks better than the card. BUT, it is a sig for a Ranger I didn't have so it's welcome in my house. 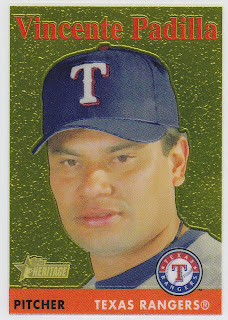 This is some 2007 Heritage Chrome shininess of Vincente Padilla #1461/1958. I don't really think I need a shot that close of Vinny's face. Maybe that's just me though. Is Vinny going to be with the Dodgers next season? I have my computer set up to block any news item about Vinny unless it's on Night Owl's blog. 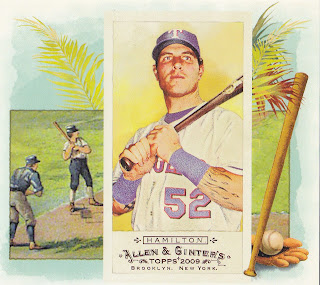 This is actually my second 2009 A&G N43 Josh Hamilton. Another blogger sent me one and Kerry did too. I got them both at about the same time. They are the only N43 cards I have and while they pose a storage issue, I'm glad to have them. 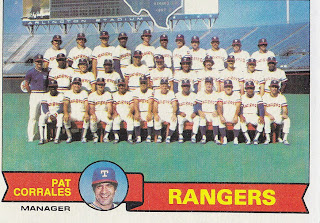 Last, but certainly not least, we have a couple of pre-1981 cards which I love getting. Both of these next two are firsts for me. This 1979 Topps Rangers team checklist is great. It gives an even better view of the scoreboard than the 1978 Topps version. 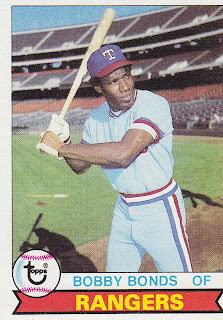 Bobby Bonds was traded by the White Sox to the Rangers in 1978 and played in 130 games for the Rangers. He had a pretty good season, hitting 29 homers and driving in 82. He was traded in the off season to the Indians.

Kerry, thanks so much for ALL the great cards. I really appreciate it!