Too Many Grandersons had some cards on the MCG site he was looking to trade for Tigers. One of them was a great play at the plate card that I just had to have.

After trading emails, I used some of my cards to acquire a 1973 Willie Horton. I sent the Horton and two other '73s over to him for this gem. 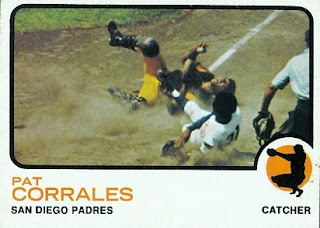 This 1973 Pat Corrales instantly becomes one of my favorite play at the plate cards. Let's take a look.

Steve Arlin is on the mound for the Padres. It's the bottom of the 2nd and the Cubs already have a 3-1 lead. Ron Santo leads off with a single to center. Randy Hundley flies out to left. Fergie Jenkins, the Cubs starting pitcher, singles to left, moving Santo to 2nd. Don Kessinger doubles to left scoring Santo. Jenkins is waved home and the relay throw from Leron Lee to Enjo Hernandez to Pat Corrales is in time! Jenkins is out in what looks to have been a mighty collision.

Both Jenkins and Corrales stayed in the game and the Cubs won the game 12-9. Jenkins got the win despite giving up 7 earned runs.

Many thanks to TMG for trading this card to me!
Posted by Play at the Plate at 4:45 PM