What? Do you think I'm only interested in play at the plate cards? I'm not that one-dimensional, despite appearances.


When it comes to vintage goodness, I love the play at the plate cards in the 1956 set, but there are some other great cards in that set.

This is the latest 1956 card I acquired via trade on the Topps Transmogrifier site. 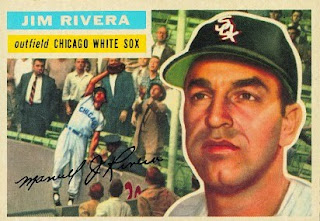 It's a great Jim Rivera card. I'm not sure how high that wall was, but it looks like Rivera is about 10 feet off the ground. According to Wiki, "Rivera was a sparkplug for the White Sox. A smart and fast runner, he ran the bases with abandon, sliding into bases on his belly before it was fashionable, and made many a game-saving catch in the right field. A ground ball hitter, he used his speed to full advantage and was a much tougher in clutch situations." I guess that would be one of those game-saving catches on the card. 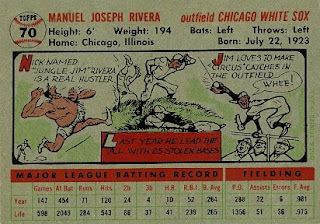 Initially, I was confused about why the front of the card said his name was Jim, when the back lists it as Manuel Joseph Rivera. I would have expected the name Joe before Jim. Then I saw his nickname was "Jungle Jim". Apparently a sports writer gave him that nickname because of his head first approach on the bases. I don't really get it, but that's just me. I do like the cartoon on the back that shows him balancing on top of the fence. It goes nicely with the photo on the front.