I've made no secret of the fact that 2012 Goodwin Champions is not really my cup of tea.  Or Dr. Pepper.

I am on board with the Military Machines inserts.  So on board in fact, that I want all 25 of them.  I managed to pull one in the blaster I posted last week. 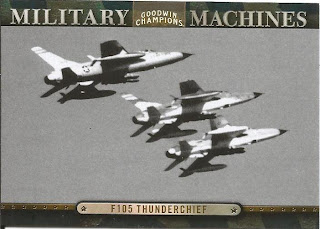 It was the F105 Thunderchief card.  I've also managed to trade for two, one being the M4 Sherman and that's right, another F105.  I know, I know, if I was better organized, I could avoid such mistakes.  That's ok because I can probably trade it for another one.  If you have any Military Machines that you want to trade, just let me know.

I'll keep them alongside some other military cards that I've had a for awhile. 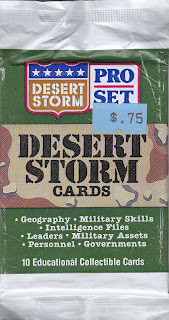 I have a special place for the Desert Storm cards Pro Set put out back in the day.  I was in the Navy during Desert Storm so I relate some real experience to the cards in this set. 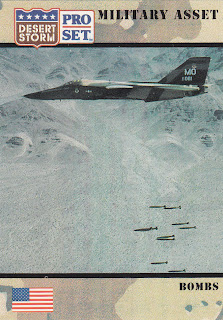 Unlike some sets we've seen over the years, I don't think this one was a "bomb".  Of course, that's just my opinion. 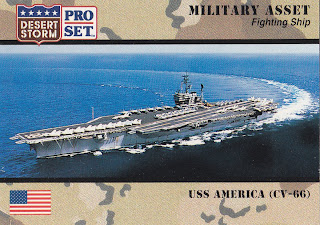 The USS America was decommissioned in 1996 after over 31 years of service.  The carrier was 990 feet of American military might. 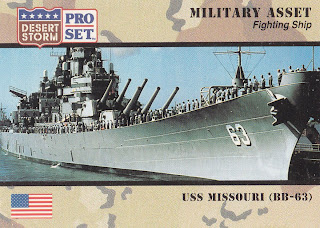 The USS Missouri was a bad to the bone battleship.  The Empire of Japan surrendered on her, ending World War II.  She was decommissioned in 1955, but was reactivated in 1984 and saw service in Desert Storm.  She now sits as a museum at Pearl Harbor.

One day, I hope to have the full Goodwin Military Machines set to go along with my Desert Storm set.  If you have any for trade, shoot me an email or leave a comment.