Some of you may remember my September post about how to combat packsearchers. Well, at least how one Wal-mart store was doing it.
Here, to refresh your memory, is the lovely picture I drew to accompany the post. 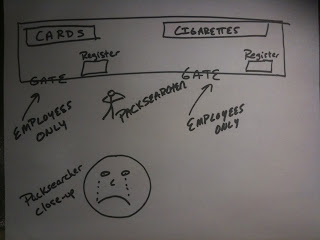 Well, it appears that not only will other Wal-marts and Targets not be joining the Coalition Against Packsearchers (a very made up term), but this Wal-mart has given up the fight as well.

They have gone back to the standard configuration for the card aisle with everything readily available and in reach.

I suspect it had more to do with convenience than anything else. Wal-Mart customers didn't like waiting for cards. Wal-Mart employees, in my experience not the most customer service oriented people, didn't like going to get cards for people. The vendors probably complained about the slowdown in sales as well.

The two vendors I've talked to don't really card about the pack searching as long as the cards sell. The store managers and employees could not care less, as long as it's not affecting them. The companies probably don't care. They stick dummy cards in that don't fool the good packsearchers and load up most of the products with crappy relics and autos that the packsearchers toss aside.

I for one still get a smile on my face when my son pulls one of those "crappy" relics or autos from a retail pack because he's not jaded like me and it means the packsearching douchebag missed one. I'm really thankful my son has gotten into cards because I've rediscovered why I liked cards in the first place and I don't have to get too bogged down in the negativity.

I still don't like packsearchers though. They suck.
Posted by Play at the Plate at 5:30 PM