Despite reassurances from Gus Zernial that everything is ok, something fishy is going on with this card. 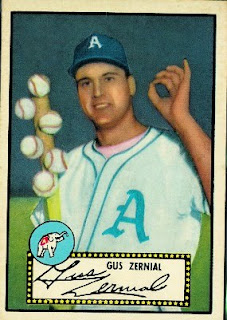 You may recall that several bloggers, including me, mentioned Gus Zernial's passing recently. I have the great '56 play at the plate Gus and started looking at his other cards. I did a double-take when I saw this 1952 gem. I couldn't figure out why he had 6 balls stuck to his bat and then I read the back of the card, which may give a reason. 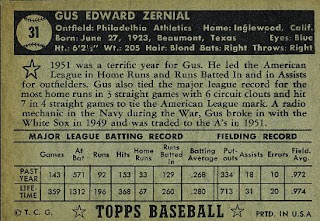 Over a three game stretch in 1951, Gus hit 6 homeruns, which tied a major league record. It sure makes for an interesting card in a set that has a lot of boring "shots".