You'll be seeing these cards again

I'm trying to wrap up my little MCG Tradeathon so I can request my glorious mint condition cards from the dungeon-like vault at Topps HQ. I've made one trade and have a number of offers out for other cards to give away. In the process of gathering over 130 cards from a variety of bloggers, I've received and rejected well over 100 trade offers every day for over a month. It's mind-boggling the number of trade request that are being sent out as the promotion wraps up.

I like to be a little off the cuff sometimes, but I'm not overly prone to exaggeration. I'd wager that I've received over 500 offers that included the same card. Over and over. Offer after offer. Most of them from the same 5 or 6 people. Sometimes for vintage, sometimes not. The card in question: 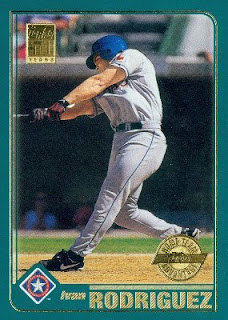 Did you know there are (as of the time I was writing this) 7,112 unlocked 2001 Ivan Rodriguez cards on the MCG website. You read that right. Seven thousand, one hundred and twelve. I'd be willing to bet those of you who are still paying attention to the MCG site are getting offered these same Pudge cards. Am I right?

Well, guess what? Of those 7,112 Pudge cards, 7,110 of them are not going to be requested. They just aren't. The 2 that are claimed will just be clicking errors by the user and will be immediately and eternally regretted when the package arrives and out falls a chewed up 1956 Bill Sarni and a Pudge card. You know where those cards are going to end up don't you?

That's right. You'll be redeeming them again when the next "code" card falls out of your 2011 Topps pack. It won't just be the Pudge card, but thousands and thousands of other cards that didn't get shipped. Good luck with all that.

I'll be right there with you.