A few weeks ago, Wicked Ortega used his blog, My Past Time...I Love It! to distribute some unwanted basketball cards. I put in a claim for my kid to get some older Dallas Mavericks cards and Al's package brought back quite a few memories. 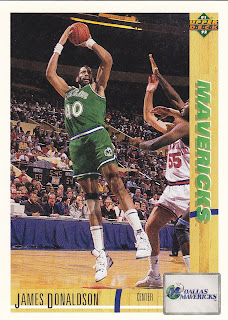 1992 Upper Deck James Donaldson. I recentley heard some of the local sports talk radio heads talking about how James Donaldson was the best center in Mavericks history. Is it any surprise that the Mavericks have never won an NBA Title. No, it's not. 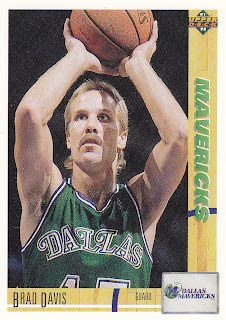 Brad Davis was the taken by the Lakers with the 15th overall pick of the 1977 NBA Draft. He played 15 years in the NBA, the last 12 with the Mavericks. He was the first Maverick to have his number retired and still does work as part of the television broadcast crew for Mavs games. 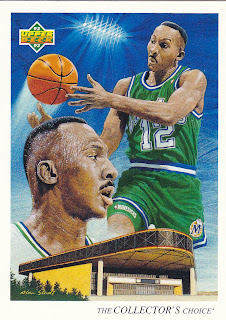 1993 Upper Deck Derek Harper Mavericks checklist. I put this one up because it shows Reunion Arena, the Mavericks original home. Reunion Arena was torn down earlier this year. 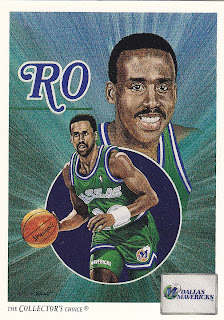 1992 Upper Deck Rolando Blackman Mavericks checklist. Ro was one of Dallas best all-time players and a fan favorite. I got my picture taken with him at a team promotion before a game once sometime back around 1984. He had the biggest hands I had ever seen. Blackman scored 17,623 points, 60th on the All-Time list right behind some guy named Magic Johnson. 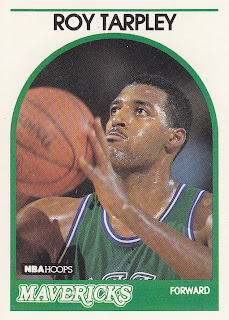 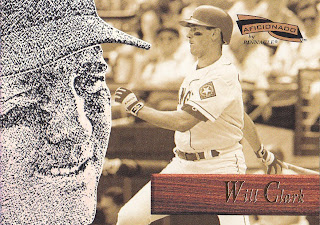 Wicked collects Will Clark like I do, so he often includes a nice Clark card in his packages. This is one I didn't have from 1996 Pinnacle Aficionado.

Thanks for bringing back all those old Mavs memories Al!
Posted by Play at the Plate at 8:00 AM