This recap is a bit delayed. It's from the Tuesday night game between the Rangers and Twins. The reason for the delay is that I didn't want to "jinx" the Rangers by bragging and have them miss out on the possible sweep. Of course you and I both know that "jinx" business is hooey, but in baseball, you don't take chances.

Alas, the Rangers didn't get the 4 game sweep anyway, but I'll take 3 out of 4 every time.

The game started out with a demonstration by the U.S. Army Golden Knights Parachute Team. You may have seen this on the news or ESPN. 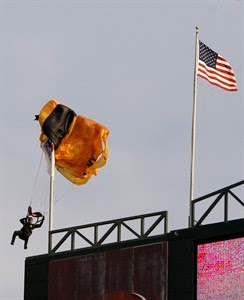 You can check out the video on the Golden Knights blog. At first a lot of us thought the "snag" was part of the show, but it quickly became clear that it was NOT. He was ok though and quickly released himself onto the platform atop the scoreboard and his chute was retrieved about 15 minutes later.

I don't know when this happened... 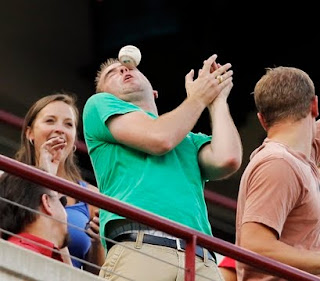 but it's a funny picture. At least that's what the girl behind him thinks. This was also at the game that night and I'm guessing he's either clapping because he got a black eye, or he whiffed on the catch. Most likely it was the latter. That's why I always take a glove. I don't care what anyone says, I know how to use a glove, I have a glove and I'm going to have my glove if I'm sitting where I might get beaned. (I must admit, my glove is usually down under my seat by the middle of the 1st inning.)

As for the game recap, the Rangers won 4-3, Josh Hamilton hit a homerun, Bengie Molina made an awesome pick of a Mitch Moreland throw in the dirt and tagged someone out on a "play at the plate". Joe Mauer DH'd and I was happy. Neftali got the save on a called strike three so that was nice.

As for the end of the 4 game series with the Twins, it leaves the Rangers 1/2 game behind Minnesota for home field advantage. It also finished up with the Rangers leading Oakland by 8.5 games and the LAAAAAA Angels by 9.5. Oakland comes into town for three games starting tonight (Mojo, are you going?) so the Rangers need to take care of business.

Oh yea, my son did manage one autograph. I think I'll use if for the September contest so I'll show it to you in a few days.
Posted by Play at the Plate at 8:00 AM