In order to drown the sorrows of my beloved Rangers losing 2 at home, I bought what may be the last two packs of the year for me. Two more of the "value packs" of 2010 Topps Chrome to be specific.

The first rack pack had...nothing special. It had a refractor or two plus the three Orange Refractos. I don't remember much except there were zero Rangers.

The second value pack actually had some value to it. 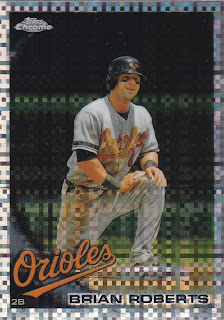 The most notable card from the three packs was this Brian Roberts X-Fractor. I know some people have noted these don't say X-Fractor on the back anymore. The pack still lists X-Fractors and I'm sure this is the type of card it is referring too.

Now for the three Orange refractors. 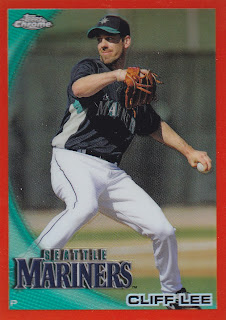 First up was Cliff Lee. Is it too early for me to start praying for a repeat performance from Cliff Lee in Game 5 of the ALDS. I am going to be distraught if they let Tampa steal this series. 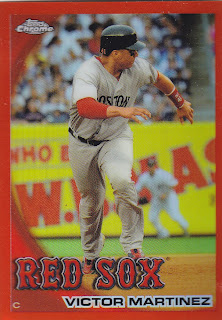 The last card in the little 3-card pack was Victor Martinez. Not too bad, but I'd rather have a patp shot of Victor. 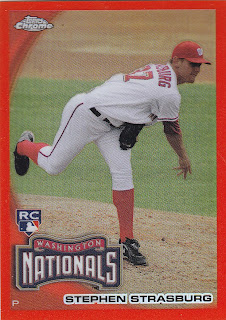 Tucked in between Lee and Martinez was the Phenom himself, Stephen Strasburg. I checked on Ebay and these are going for $20+. I don't do Ebay anymore, but I wish I did. I'd sell this one in a heartbeat.

Other than a couple of group breaks I'm in each month, I'm most likely done buying anything for 2010. The budget is getting intimidated by the looming Christmas season so that will limit, if not kill off, any money for cards.

I have cards to mail to a number of people, including those people who got the hits from the A&G box I opened. Can someone give me a long distance kick in the pants?