Bud from First Day Issue is one of those guys who will occasionally send a package out of the blue. No trade talks, no cards claimed...just a friendly package with no strings attached. It's always a nice surprise.

I won't keep you long. I know you have your own blog to write, cards to scan and trade packages to send out. Oh, and you might have one of those "lives" I keep hearing so much about. 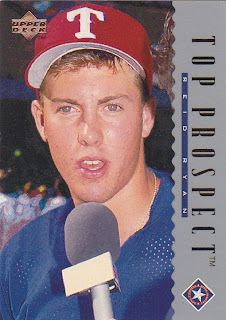 That is one crappy photo of the son of a Hall of Famer. It's a 1995 Upper Deck Reid Ryan. I wonder what the question was? 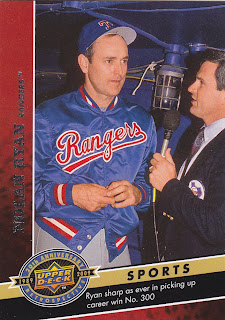 Ah, one of those annoying 2009 UD 20th Anniversary cards. I do love the old Rangers jacket though. 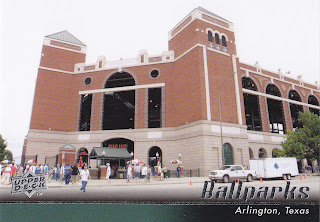 Can you believe this beautiful ballpark has never been the site of a playoff victory. That's going to change when the Yankees come to town next week. 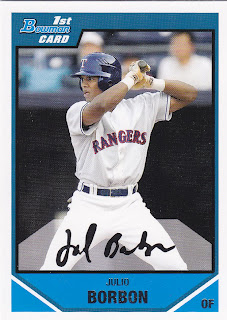 This is a 2007 Bowman Julio Borbon. He doesn't have a hit in the ALDS and I don't know if he'll start in game 5. I wouldn't mind seeing him pinch run for Vlad in the top of the 9th and score the winner on a play at the plate. It could happen. 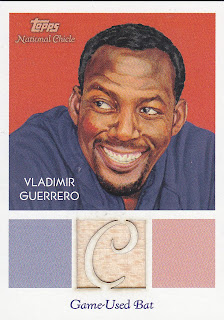 Speaking of Vlad, here is a 2010 National Chicle Vladimir Guerrero bat card, #70/199. I hope he's smiling like this later tonight.
Bud also sent another 30 or so Rangers and Cowboys cards. Thanks Bud!

Keep an eye on your mailbox.
Posted by Play at the Plate at 4:45 PM