Can the Rangers beat the Yankees?

I don't know if the Rangers can beat C.C. Sabathia.

I do know the Rangers can beat Mariano Rivera. They did it twice this year. 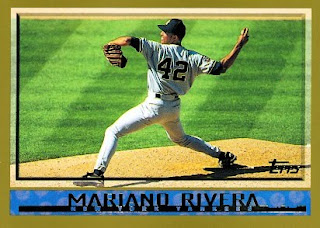 Back on August 10th, Rivera came into a game at the Ballpark in Arlington in the bottom of the 10th inning with the score tied 3-3. He gave up singles to Michael Young and Josh Hamilton before getting Vladimir Guerrero to ground out. He intentionally walked Nelson Cruz to load the bases and David Murphy promptly hit a single to win the game. Rivera pitched 1/3 inning, giving up 3 hits and the winning run while picking up the loss.

On Septempber 11th, again at the Ballpark in Arlington, Rivera came in to close out the game with the Yankees up 6-5 in the bottom of the 9th. Guerrero walked, Cruz singled, Ian Kinsler doubled to tie the game. Chris Davis was intentionally walked, Andres Blanco popped out and Jeff Francouer got the big walk off Hit By Pitch to win the game 7-6. Rivera again pitched 1/3 inning, giving up 2 hits and 2 runs.

These two games represented 2 of Rivera's 3 losses on the season and 1 of his 4 blown saves. It also shows that Texas isn't going to give in, no matter which team they are facing and who is on the mound.
Posted by Play at the Plate at 7:45 AM