A Card for Someone Else

Have you ever had a card in your collection that you just knew belonged in someone else's collection? Maybe you have a few of those cards right now. I'm sure I have some more of those, but this is about one of those cards.

Let's go back in time a bit.

It's 1999 and I am smack dab in the middle of my insanity. I'm spending money on cards that I don't have. Sometimes $1000 in a week. Sometimes even $500 or more in one day. I was buying everything in sight and I was neck deep in an addiction that was every bit as real as a drug addiction. Looking back now, I realize what a nightmare it was and how sick I would feel after a shopping spree. If you're one of the 4 or 5 people who have been with me since the beginning of PATP, you've read the story.


But this post isn't really about the bad times. It is about one card. The one and only card from that time in my life that I didn't try to hide from anyone. 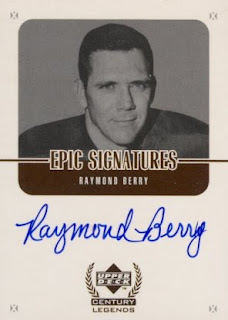 I'll never forget pulling this 1999 Upper Deck Century Legends Raymond Berry auto from a pack of what I'm sure was an overpriced box. I didn't have any connection to Berry, but he was one of the guys my dad talked about all the time when we would watch football together. He would talk about how tough Berry was and how he never turned the ball over. He said Berry could and would catch any pass Unitas threw his way. My dad wasn't a Colts fan, but he said Berry was a true Texan and tough as nails.


When I pulled this card, I couldn't wait to show my dad. He didn't care about cards at all, but he had always given me a dollar or two to buy cards as a kid. He even took me to my first card shop and waited patiently as I "oohed" and "aahed" over all the stuff in the store. He took the card from my and looked at it and said, "That's a good player and a good card". I know it doesn't sound like much, but it was a connection that I've never forgotten.


Well, fast forward nearly 10 years and I discover the blogosphere. I start making trades and sending out packages. While rummaging through a box of cards I found three autos from that '99 UD Century Legends set and put them aside. When I started making deals with Beardy, I started thinking about how much he might like that Berry card. Finally, just recently actually, I sent the card to Beardy. I enjoyed having the card for awhile, but the true joy in collecting is having cards that represent a team or players we love. I know for me that means Rangers cards because I've been a fan since I was 8 years old. That also means to me that instead of having a great card like that sitting in a shoebox in the closet, I could send it to someone who would appreciate it for it's true greatness. I know Beardy was the right person to have that card.

I have other cards that fit that description and would fit right into the collection of some other bloggers.

Someday, I'll get around to sending those cards out.

(If you missed my World Series Contest post from this morning, make sure you get your pick in before tomorrow).