I like giving pub to other blogs. It usually comes in the form of a contest pimping post. This time it's a little bit different.


Everyone's favorite Night Owl has this thing about collecting night cards. Personally, I can't imagine anyone getting so hung up on such a specific type of card. (That was said very tongue in cheek and I wish someone would invent an "I'm just kidding" font).


Anyway, Night Owl is running an Awesomest Night Card Tourney over on his blog. Currently up for your perusal is Round 5, and it has a card I just had to throw my support behind. 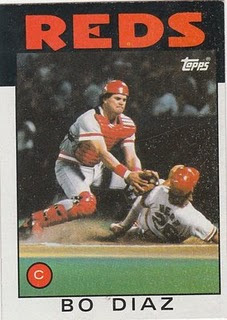 How could you not vote for this awesome night card that just happens to be a play at the plate as well? It's a great 1986 Topps Bo Diaz card. You'll have to go hit the link on Night Owl's blog to see what happens on this play.

I don't care if you're a "Hope and Change" kind of person or you're more of a "Mission Accomplished" type, you should vote for Bo! This is a bipartisan issue after all.

Bo is up against a nice, but not nice enough 1994 Hank Aaron card. Honestly, hasn't Hank won enough awards in his lifetime?

He's also running against a 2006 Opening Day Hong-Chih Kuo (no contest), a 1987 Fleer Superstar Special (again, no contest), a 2009 Topps Brian Stokes (nope) and a 1989 Upper Deck Jerald Clark (ok, this one is nice, but it's Upper Deck, I'm sure they were cheating somehow).

That only leaves one viable, deserving candidate and that's Mr. Bo Diaz. Please give him your support.

*This ad paid for by the Bo Diaz for the Round 5 most Awesomest Night Card campaign. My name is PATP and I approved this message.*
Posted by Play at the Plate at 11:00 AM