There were no shortage of contributors in Game 4 of the ALCS.


Bengie Molina's 3 run homer after the intentional walk to Murphy was a turning point in the game.


Josh Hamilton and Nelson Cruz provided some cushion with homers of their own.


Nick Swisher getting hit on the pant leg by the pitch AND it not being called was a big play too. That would have driven in a run and most likely led to Neftali coming in the game. I think it was karma catching up with the Yankees since the actor Derek Jeter got away with a faked hit by pitch recently.


Michael Young's play on Lance Berkman with the bases loaded was big too.


But all those things may not matter if this guy doesn't come up big for the Rangers. 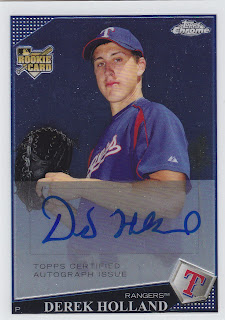 Tommy Hunter gave up 3 runs in 3 1/3 innings. Derek Holland came in and shut down the Yankees for 3 2/3 innings. He gave up only 1 hit while striking out 3 and got the Rangers through the 7th inning. The offense did it's thing again tonight and Holland got a much deserved win.
Posted by Play at the Plate at 12:03 AM