The best Ebay seller I've ever dealt with

I've been an Ebay buyer and seller for 15 years.  I had a pretty long stretch where I didn't do anything on Ebay, but I've recently been buying some 2013 Chrome Rangers stuff and a few other bits of cardboard eye candy using the proceeds from a few sales.

I've dealt with unhappy, unscrupulous and un-satisfiable (not a word) buyers AND sellers.  I've dealt with a few generous seller who, like my fellow bloggers, include extra cards for no reason.

I recently had an experience like no other and one that I think exemplifies how Ebay sellers should act.  As a seller over the years, I have briefly misplaced cards I sold on two occasions.  I found them within a day or two and mailed them out with what amounted to a slight delay in shipping.  It didn't really cause a problem with the buyer either time.  One of my recent purchases resulted in a similar incident.

Ebay seller lcwizard  had a Michael Young card that I really liked.  As with most sellers, I try to get the best deal by checking to see if they have other cards I want so I can combine shipping.  I ended up purchasing three cards from lcwizard. 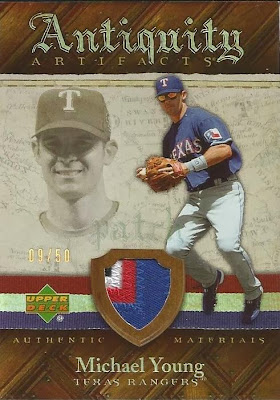 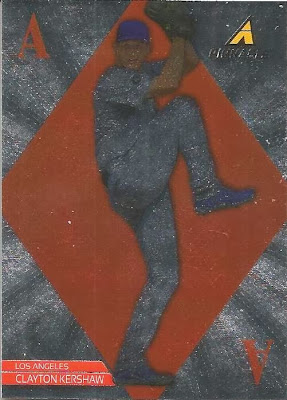 I also liked the look of this 2013 Pinnacle Clayton Kershaw Aces insert as trade bait for only 99 cents. 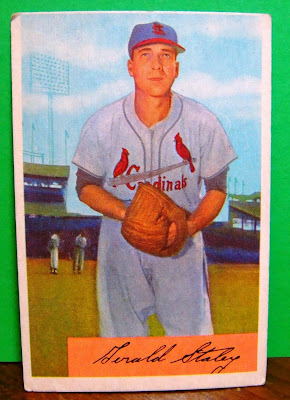 The last card I bought was more to satisfy my itch for vintage than anything else.  I didn't already own any 1954 Bowman cards so I took advantage of a good deal on theis Gerry Staley for $1.05.

I think those three cards were a pretty good deal for a little over $5 shipped.

Not long after the auction was over, lcwizard notified me that he couldn't locate the Staley card.  He was very apologetic and offered to let me select a couple of other cards I liked and he would send those and also ship the Staley when he found it.  I told him I understood because the same thing had happened to me as a seller.  I looked through the other cards he had listed and mentioned two that I liked, but that he could send them or not and I'd be more than happy to wait for the Staley.

Here is what he sent along with the Young and Kershaw cards. 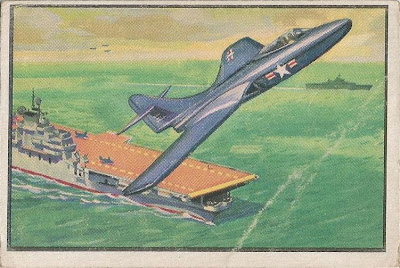 Waxaholic has hooked me up with a few of these early Bowman military cards and I love 'em.  This is a 1954 Bowman Victory Through the Air card.   This was one of the cards I mentioned to the seller and I do appreciate being able to add it to my collection.  I think this is a set I'll have to seriously pursue. 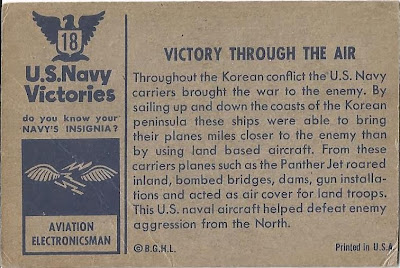 Of course I had to show the back.  Do you know your Navy's Insignia?  Well, I do now! 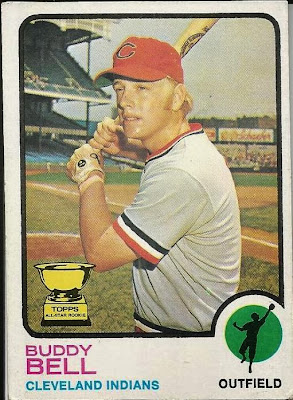 The other card I mentioned was this 1973 Buddy Bell.  Buddy was one of my favorite Rangers as a kid and I'm slowly working on the 1973 set so this was a nice addition.

lcwizard didn't stop there.  He sent over two other cards as well. 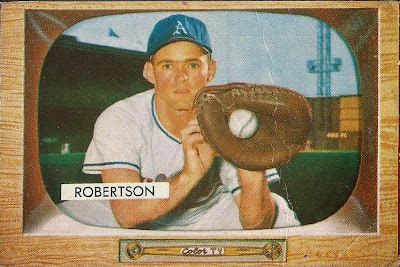 I didn't mention my affinity for catchers, but I was very happy to receive this 1955 Bowman Jim Robertson card.  This fits right in with my catcher collection. 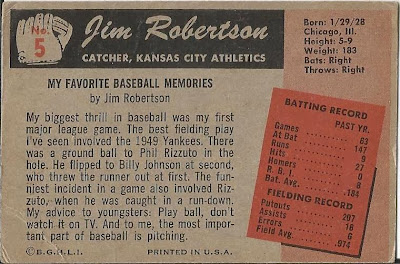 "My advice to youngster.  Play ball, don't watch it on TV."  If only they would listen to Jim! 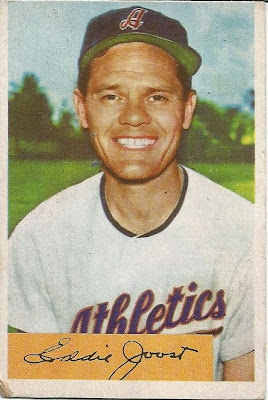 Hey look, a 1954 Bowman card!  It's Eddie Joost and he sure looks happy to be in my collection. 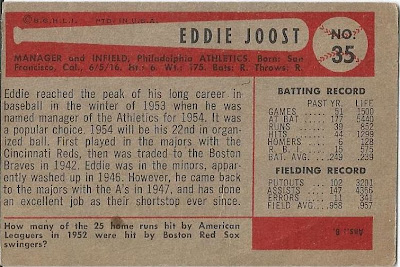 The card back writers were harsh back then saying that Eddie was apparently washed up in 1946.

I want to thank lcwizard for turning what could have been a bad Ebay experience into a good one.  You guys check out his auctions and see if he has anything your collection can't live without.