Christmas has come and gone again.

I got four blasters of cards and I'll be showing them off soon.

First, I thought I'd take a Moment and show off some Milestones.  2007 and 2008 Moments and Milestones to be specific. 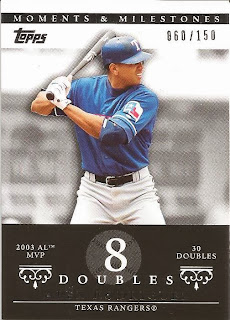 I'm sure most of you know how Moments and Milestones works.  If not, I'll give you the low down.  Take this Alex Rodriguez card.  It highlights his 30 doubles in 2003.  Each of his 30 doubles has a card which has 150 serial numbered copies.  That means there are 4500 cards, each serial #/150, that highlight one of Arod's doubles.  If you want a Master Set of 2007 M&M with all it's variations, you'd have to collect 12,475 cards.  Good luck with that.  I highly doubt I'll ever even have a team set.  Imagine having to track down one of each of the 30 doubles cards.  Wow. 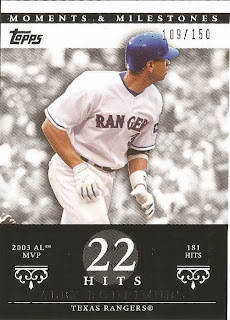 It would take more than 20 pages in a binder to house one of every "hits" card for Arod.  As much as I'm a stickler for getting every Ranger card, I don't know if I can handle that much Arod.  Having just one of the 27,150 "hit" cards will probably be sufficient.  Or will it...? 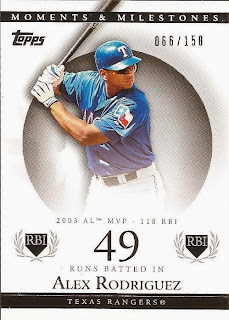 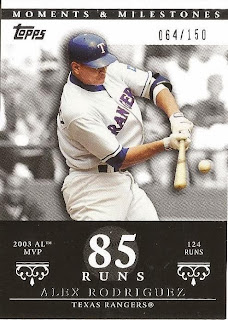 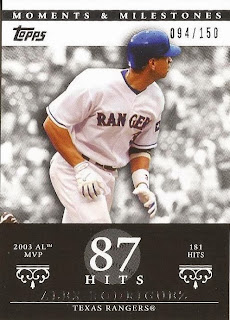 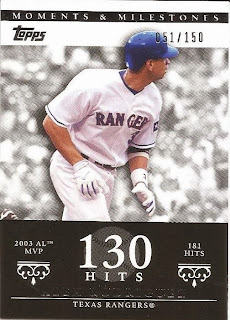 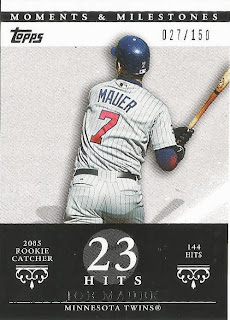 Did I mention these cards came from Jon at Community Gum?  Nah, I was saving that nugget until now.  Jon even sent me a couple of Joe Mauer cards. 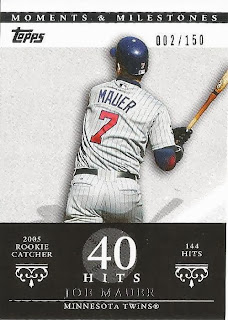 Nothing against Joe, but that's just not a good photo. 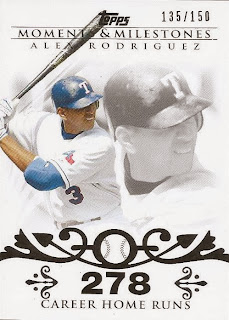 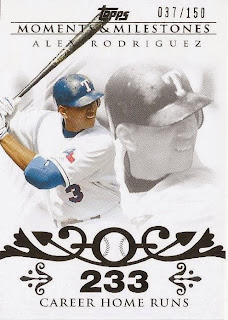 Topps celebrated Arod's 518 career homers with a card for each of his 518 homers.  They made 150 of them for a total of 77,700 cards.  And they all look alike except for the number at the bottom. 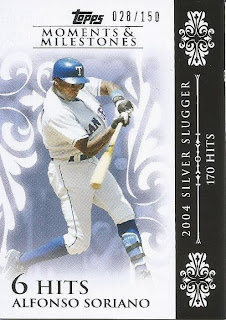 Here is another former Yankee Ranger. 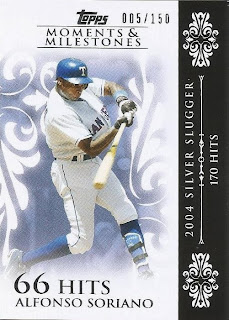 Maybe the day will come when I have every other Ranger card and all I have left to search for is the variations of these M&M cards.  That would be nice.  To have all the other Rangers cards I mean. 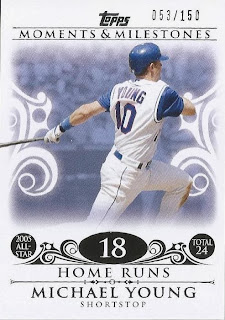 If any of you are trying to collect all of your favorite players or teams, good luck!

Jon, thanks for all the great cards!  I hope you like the stuff I sent back.