I've been toying with the idea of collecting the 1956 Topps set for awhile.  It's one of my favorite sets.  I never really paid much attention to it until the Million Card Giveaway a few years ago.  I was able to pick up a few of the amazing '56 play at the plate cards from the MCG and have been fortunate to pick up a few others in trades along the way.

I made a purchase on Ebay recently that literally gets me started on the set. 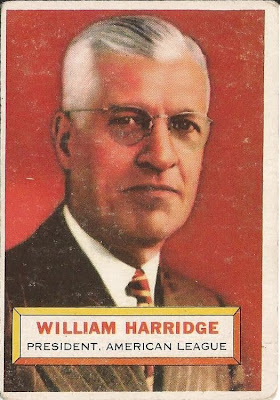 This is William Harridge, President, American League.  He looks so official. 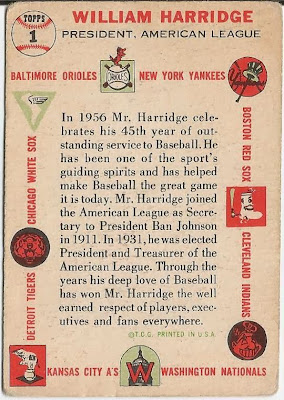 Mr. Harridge is the all important Card # 1 in the 1956 Topps set.  According to the back, he celebrated his 45th year in baseball in 1956. That's impressive. 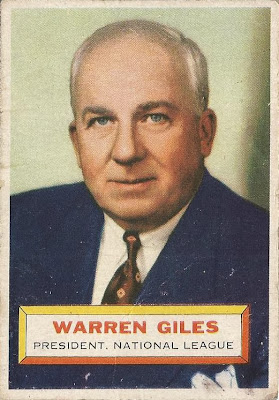 Next up is Warren Giles, President, National League.  He looks likes my middle school principal. 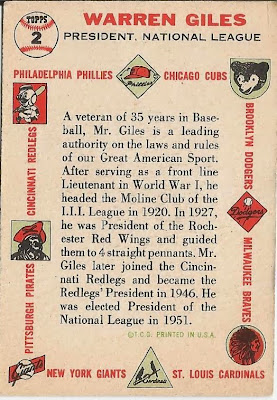 Mr. Giles is card # 2 in the 1956 Topps set.  He was a "front line" Lieutenant in World War I which meant he would have seen some real combat. 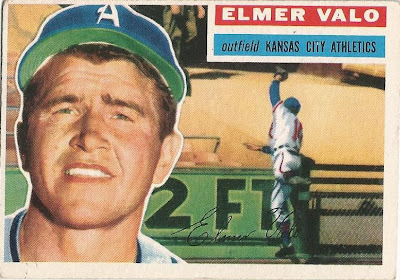 The final card of this purchase was one I've had my eye on for awhile.  I love the great action shot of Elmer Valo making (or not I suppose) the great catch. 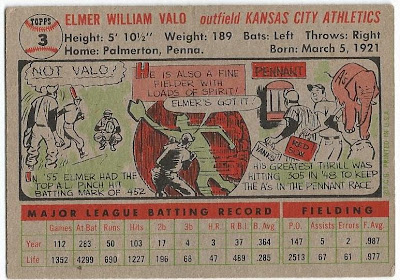 Elmer is card # 3 in the great 1956 Topps set.  I have to check to see how many others I have because I've never really kept track.  However, I think I'm off to a jolly good start with these three off the board.  After all, it's all downhill from here...you know, with only cards like Robinson and Mantle to go.

I'm sort of like this guy when it comes to making collecting goals.  I don't want to set myself up for failure so instead of a self-imposed deadline that I won't meet, I'll just say I'd like to add 50-60 cards a year to the set with a couple of them being the tougher (more expensive) cards.  I'm not going to get hung up on condition either.  I like vintage of all types so a crease or three isn't going to keep me away and it'll keep my cost down.