Breaking up with JABO

Group breaks are a blast and I probably spend too much trying to get in as many as I can.  Kyle over at Just a Bit Outside has been having quite a few breaks and I've missed a few, but I had to get in on #6 (GQ) and #8/9 (Topps Chrome).

My love for Chrome is well documented around here and I couldn't pass up JABO's box break #8 which consisted of the following boxes:

He combined that with box break #9 which was the following boxes:

I got a healthy dose of the Rangers and my random team, the Royals. 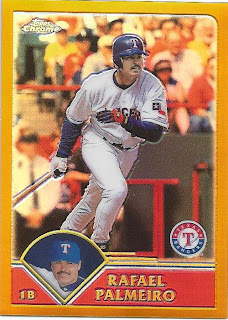 This 2003 Chrome Rafael Palmeiro gold refractor is #'d to 449 and looks way better in person than in the scan. 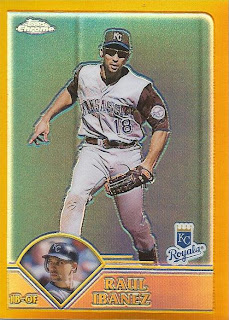 Kyle pulled 5 of these gold refractors and I ended up with two of them.  This is the Raul Ibanez gold. 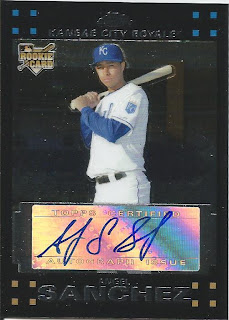 I also got one of the two autographs, this one a 2007 Chrome Angel Sanchez.

JABO's group break #6 was two boxes of Gypsy Queen.  I was very happy with the results of this break.  He managed 9 hits, including a 1/1 printing plate for the Brewers. 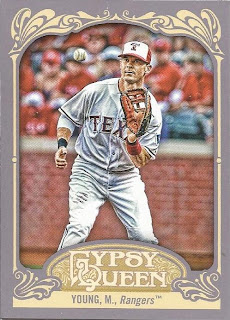 I really like this Michael Young card.  The look on his face is a little odd, but I like the Patriotic Cap with the US Flag Texas Logo. 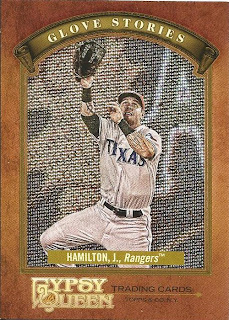 This was one of the Glove Stories cards I really wanted to pull.  The Willie Mays GS card was the other one I wanted and I pulled that on my own. 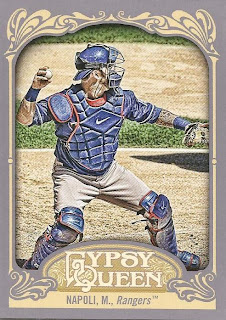 The Mike Napoli SP was a nice addition.  I need to check, but I've got a good chunk of the SPs for GQ this year. 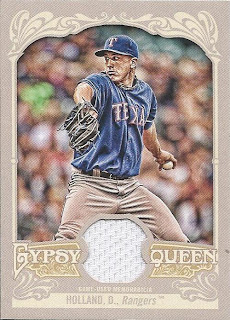 Of the 9 hits Kyle pulled, the Rangers showed up twice.  This is the regular Derek Holland jersey.  Check another one of the wantlist. 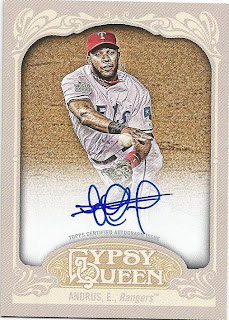 This is a nice on-card Elvis Andrus auto.  Sure, the auto isn't nice, but it's on-card so I'm not complaining.  You'll be seeing this one again in another group break I joined.

Kyle, thanks for another great break!  I'm looking forward to the next one.
Posted by Play at the Plate at 5:30 PM