One of the most incredible complete sets I've ever seen 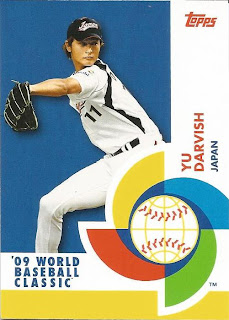 These cards come via trade from Ryan over at The Great Orioles Autograph Project.  I don't know if you're aware or not, but Ryan recently completed his project.  At last count, he had 920/920 Orioles autographs for his project.  That is truly amazing.

Ryan also had the good fortune (or misfortune) to be at the Orioles game the night Josh Hamilton hit his four homers.  I have to say, given the way the Phillies "fans" treated Jayson Werth when he broke his wrist, it was truly classy of the fans to give Josh a standing ovation after his 4th homer. 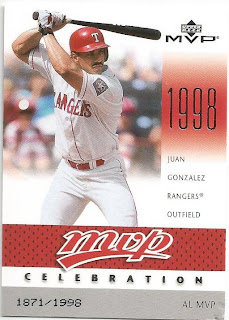 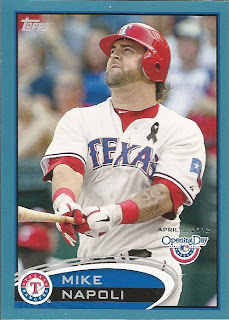 You can't really replace a legend like Pudge Rodriguez, but Mike Napoli is the first catcher the Rangers have had since Pudge left to capture the fans hearts.  It's funny really, because most of us couldn't stand him when he was playing for the Angels.  Fan/player relations are a lot like real estate...it all depends on location, location, location.  This 2012 Opening Day Napoli is #1003/2012. 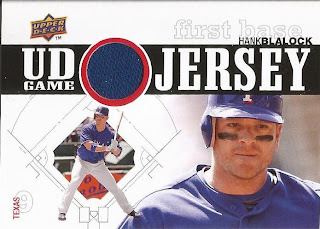 Here we have a nice blue swatch from Hank Blalock on a 2010 Upper Deck Card.  I can't find any reference to Hank anywhere so I guess he really is done.  He had 9 decent seasons with almost 1000 hits, 153 homers and a .269 batting average.

Ryan, thanks for these and the rest of the cards you sent.  I'll forever be envious that you got to witness Josh's historical game.
Posted by Play at the Plate at 9:00 AM