Last Saturday David Murphy hit his first career inside the park homerun.   It was a three run shot sprint that gave the Rangers a 4-0 lead against Houston.  Unfortunately, the Rangers would go on to lose the game 6-5. 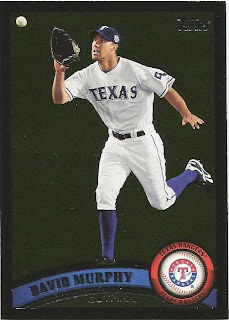 Murphy's inside job was the 23rd in team history, but not the most memorable.  On August 27, 1977, Toby Harrah and Bump Wills hit back-to-back inside the park homers off Yankee pitcher Ken Clay.  The Rangers won that game 8-2.  Of course, the Yankees would have the last laugh by winning the World Series less than two months later. 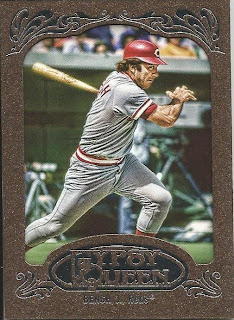 The 2011 Wal-mart Murphy pictured above was included in a package from Adam over at Thoughts and Sox.  It was part of a trade that started when Adam won a contest I held and pulled this 2012 GQ Johnny Bench bronze paper parallel.  I offered up a Red Sox bronze for it (which I promise Adam I'll send out this Thursday) and Adam sent it right over along with a stack of other stuff. 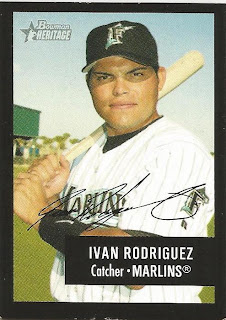 The bulk of the stack was a variety of catchers, one of whom is on the "player's I collect list".  You might recognize him as Future Hall of Famer Ivan Rodriguez. 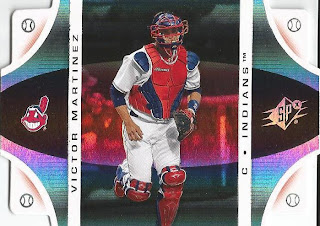 The most interesting card was this 2008 SPx Victor Martinez die cut card.  I don't know if all the SPx cards in 2008 were die cut like this one, but it's pretty cool.  The scan doesn't do it justice.  I've got the perfect place for this card. 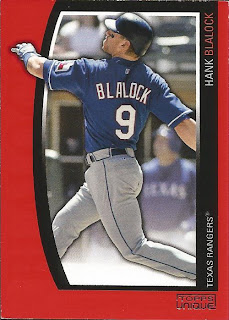 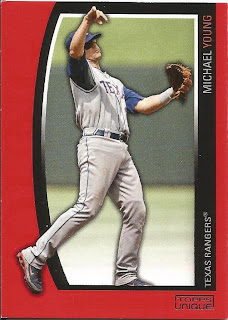 Fair warning if you're looking to trade with Adam.  He's at a new address so make sure you email him before you send him a package.  Thanks for the cards Adam!