How about a contest double dip?

You've probably already seen the College World Series contest being held by Autographed Cards, but I'm here to give you a little more incentive to give it a shot.

Two years ago I took second place in the contest and got to choose some great prizes.  It's a great contest everyone should check out.  If you win, you'll be glad you did!

The icing on the cake, or second scoop on the cone as it were, is my latest good fortune.  Brian over at  Pirates Treasure Room is holding a contest for every series the Bucs play.  All you have to do is comment "Go Bucs!" on the appropriate post and your entered.   The catch is, he's giving away cards for the team the Bucs are playing so if you're a fan of that team, you really want those cards, but you have to root against your team!  It's treasonous!  Never fear dear reader, I DID not root against the Rangers and I NEVER will!

Fortunately for me, I won cards for a team I can give away and Brian still sent me some good Rangers stuff. 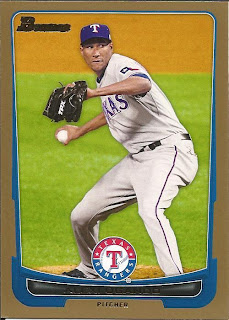 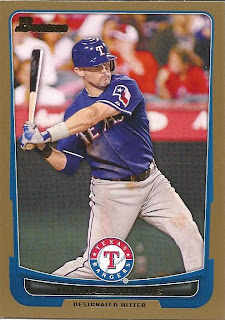 He also sent over this Michael Young gold parallel.

The Rangers were anything but gold last night as the Mariners put a 21-8 butt-kickin' on us.

Thanks to Brian for the prize package and don't forget to check out the great contest at Autographed Cards!
Posted by Play at the Plate at 7:30 AM