This just in! A parody. 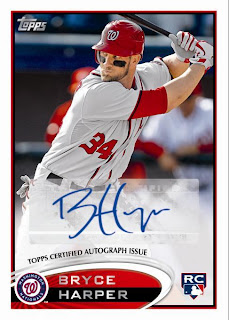 "TOpppS" has announced how it will handle the unprecedented appearance of a rookie in his first ball game.  Even though it's happened thousands of times before, TOpppS is going to act as if no other prospect has ever had his major league debut.

Every 2012 TOppps Set for the rest of the season will feature Bryce Harper cards.   Every card will feature Bryce Harper's stats on the back.  Pull an Ichiro card, it will have Harper's stats.  As an added bonus and to make each card unique, TOppps will have a "Bryce says" quote about each player on the back.  For example, you pull a Jackie Robinson Gold Parallel from Series 2.  On the back, you'll find a question such as, "Hey Bryce, what do you think of Jackie Robinson breaking the color barrier in Major League Baseball?"  Bryce says, "Well, if he broke it, he should have to fix it!"  Brilliant!

If you think having Bryce on every card in every set is great, you'll love this.  TOppps will be issuing an amazing variety of Bryce Harper relic cards.  Game used bats, gloves, jerseys and hair clippers will be just the tip of the iceberg.  TOppps will also feature relic cards using park benches from towns Bryce Harper actually flew over on his way from the minors to his first MLB game!  How exciting!!

Don't think TOppps is the only one getting in on Bryce Harper mania.  MLB is officially retiring Harper's #34 and putting it up next to Jackie Robinson's 42 in all MLB ballparks.  No grandfathering in this time either as all current players wearing #34 will have to switch numbers immediately.

The topper on all this Harpermania is the Hall of Fame announcement that the five year waiting period after retirement is being waived for Harper.  He'll be inducted as soon as he plays his 5th game.  A spokesman for the HOF was quick to point out the 5 game waiting period.  "Hey, we had to make him wait 5 games.  After all, we don't want to be accused of premature election."


Don't get me wrong.  I think big prospects like Harper are good for baseball.  It creates interest among the more casual fans and probably gets the attention of people who haven't watched a ballgame in years.  I'm just sick of the hype.  I hope he has a great career.  I just think we should let him play some before we make him into some sort of legend.