I know you missed me yesterday.  I was doing my civic duty as I was called for jury duty.  I wasn't selected, but I did make the final 40 or so from a pool of nearly 200 potential jurors.  I wasn't terribly disappointed when I was dismissed, but I would like to serve on a jury once in my life.

As you can probably imagine, this isn't really about my jury duty.  This guilty verdict is me being guilty of another purchase off the Blowout forums.  Someone listed a bunch of cards and I picked a peck of pickled Rangers with a couple extras thrown in for good measure. 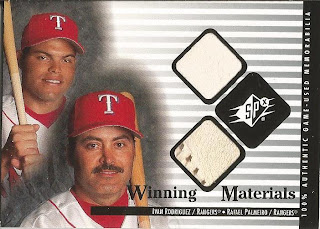 Here we have a nice 2000 SPX Winning Materials Ivan Rodriguez/Rafael Palmeiro game used ball card.  I've got a couple of similar cards in my collection, but this one is a little different.  You can see the thread holes on the lower section.  I wish they had left the threads in the piece. 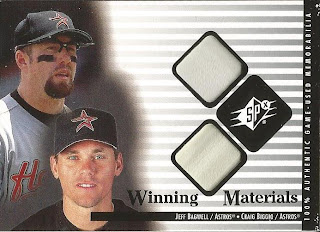 This 2000 SPX Winning Materials Jeff Bagwell/Craig Biggio has game used base pieces instead of ball pieces.  I picked it up as possible trade bait, but The Daily Dimwit already had one.  I might hold onto it unless someone else needs it.  I don't recall having a game used base card in my collection. 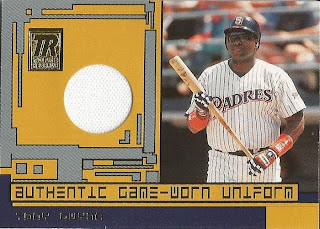 Another possible piece of trade bait that I couldn't pass up was this 2001 Topps Reserve Tony Gwynn jersey.  Sure, it's a plain white swatch, but it's Tony Gwynn.  How many jersey cards could he possibly have ?  (The answer: Too many.) 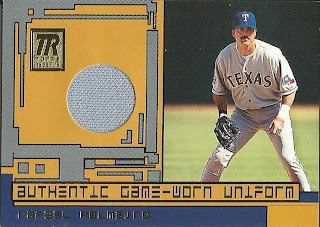 I may already have one of these 2001 Topps Reserve Rafael Palmeiro jersey cards.  One of the things I don't have sorted in my collection is "hits".  My autos and relics are just stored in a box.  I really need to sort those things so I can get a want list together. 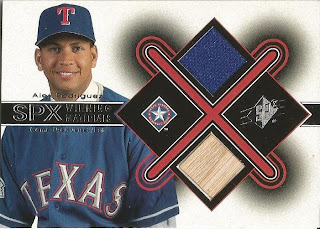 I know, I know, I picked out my own cards and still ended up with an ARod card.  I don't think I had this 2001 SPX Winning Materials cards.  It features a jersey and bat piece.  Seeing that picture brings back some unhappy memories.  It's from the day the Rangers announced the ARod signing. Here we have an on-card auto from Mike Lamb on a 2000 Fleer Autographics card.  It's numbered out of 250, but that's not important.  The on-card factor was what prompted me to add this one to the order.  Lamb is out of baseball now, but he played a utility role in the Majors for 10 years.  After he left the Rangers, he played for the Astros, Twins, Brewers and Marlins. 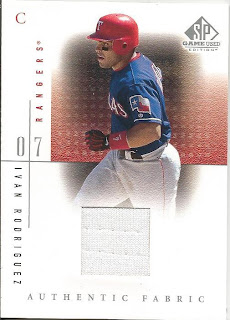 I know I have one of these 2001  SP Game Used Ivan Rodriguez jersey cards, but this one has seams!  Seams I tell you!! 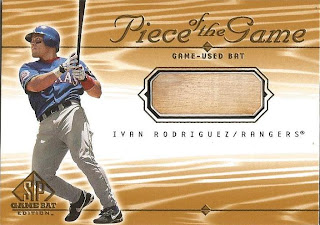 Upper Deck flooded the market with relics in the early 2000s.  The Piece of the Game bat relics were some of my favorites.   This Pudge is from 2000. 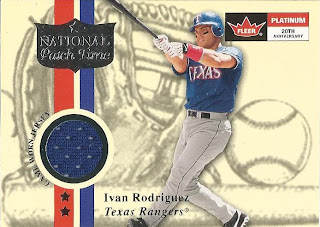 That's it for my most recent Blowout purchase.  Total cost:  $18 shipped.  I might get a better deal at a card show, but I can tell you the card shop I sometimes frequent for card supplies would have had most of those Rangers relics marked at least $10 each.  Of course, he's not the ideal place to buy cards from and I avoid buying from him most of the time.