I've been waiting rather impatiently for these to show up at Wal-mart.  They're not here and maybe they're not coming.  I finally broke down and went to Target, which is about 12 miles further from me than Wal-mart.

I did a bad, bad thing too.  I bought three blasters.  THREE!   I never do that.  At least not all at once.  I got a little carried away because I had been waiting so long.

The first card in the first pack from the first blaster was this one. 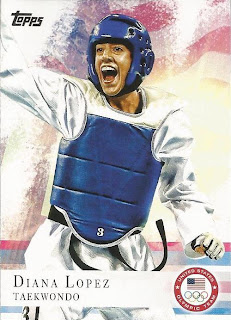 Diana is a Texas girl who just so happens to be able to kick your butt.  Mine too.  She won the Bronze Medal at the 2008 Olympics in Beijing.  She also qualified first at the U.S. Olympic trials so she should be a top competitor in London.

The first blaster didn't have any hits.

The second blaster had this beauty inside. 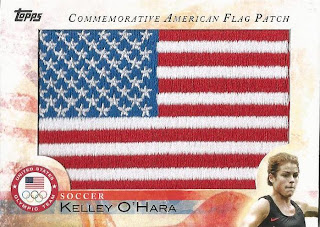 I know most people don't like manu-patches.  I'm usually on the fence about them.  Sometimes I like them, sometimes I don't.  Like any card, it depends on the design.  Let me just say I love these Flag Patch cards.  I've always been overly patriotic, at least according to some of my friends and family.  These cards fit right in line with that patriotism and I'd like to get every single one of them.  It might take until the 2020 Summer Games, but I think I'll give it a shot.

This one features Kelley O'Hara of the women's soccer team.  According to the USOC website, she has no Olympic experience.  She is on the Olympic training roster.

The third blaster didn't have any hits either.  I was really hoping for an auto, but I wasn't disappointed with the cards.  I'm in the process of sorting them to see if I got a complete set.

By the way, I ran into an old friend at Target today.  I'll have more on him this weekend.
Posted by Play at the Plate at 7:30 AM