It wasn't really all that far in the past when I would look at a card and put it away.  Now, I didn't really study cards, I just gave them a cursory glance and that was it.  If it wasn't a relic or an auto or a serial numbered card, it was just a card.  I never left a stack of base cards on a card shop counter like some people do, but I didn't give them the time they deserved either.

A few years back I discovered the card blogging community and all that changed.  I learned to give cards more than a passing glance.  I learned that some cards even had backs that were worth a look.

This card is one of those cards that might have gone under appreciated if I hadn't taken the time to really study it. 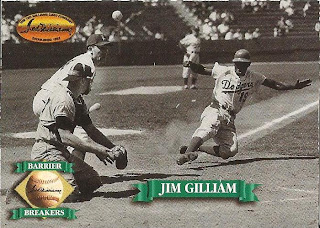 This 1993 Ted Williams Jim Gilliam Barrier Breakers card is extraordinary.  It appears Jim Gilliam and the Dodgers batter were trying to pull off the old suicide squeeze play.  The wasn't your average squeeze play because Jim is already sliding into home as the batter attempted to bunt the ball.  Unfortunately for Jim and Dodger faithful, the ball appears to have been fouled straight up.  You can see it just above the batters head.  I'm curious about what happened on the play.  Did the catcher catch it?  Was it actually in fair territory and Gilliam scored?  If the catcher caught it in fair territory, did he double Gilliam off third?  It doesn't look like there were many witnesses in the stands that day. 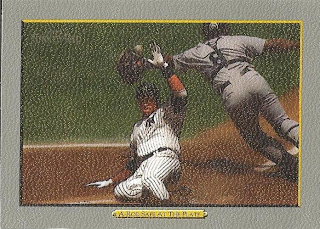 Here is another play at the plate, albeit a far less interesting one.  Partly because it's Alex Rodriguez and partly because there isn't any mystery.  Rodriguez obviously slid in ahead of a poor throw by...someone.  I look at this and I like to think that the third baseman noticed Arod tagging up and leaving third too early.  He protests, his manager questions the ump and sure enough, they call Alex out!  Yay, eveyone is happy!  Almost everyone. 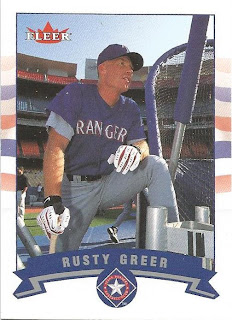 This is more of an "I'm at rest at the batting cage" card than a play at the plate.  It's a 2002 Fleer Rusty Greer card I've never seen before.  I really like the current day Rangers, but I miss scrappy Rusty Greer.  He ranks in the top 5 on my all-time favorite Rangers.  Rusty and the other cards came to me courtesy of the cluttered desk of Jack over at All Tribe Baseball.