I've read a couple of reports of damaged cards coming out of GQ blasters.  Mostly dinged base cards.

I had my own experience with damaged GQ last week. 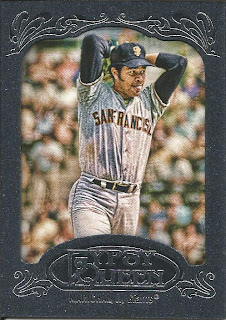 I was excited to see my first blue bordered parallel come out of a pack until I saw the bottom of the card.  It doesn't show up well on the scan, but the blue paper has peeled up just under the J on this Juan Marichal card.  You can see it pretty well if you click on the pic.  Bummer.

The same thing happened on a bronze bordered parallel I pulled of Carl Yastrzemski.  That one had a big  chunk extra bronze paper on the top, probably pulled off another card.  I somehow managed not to get a scan of that one. 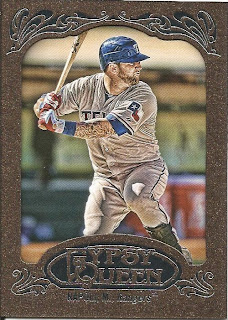 This Mike Napoli bronze parallel isn't damaged.  It was the lone bright spot in the last group I opened.

I know quality control can't catch every mistake, but it's still frustrating to be the recipient of something that's not up to snuff.  Has anyone tried returning any GQ to Topps this year?