Strangers in the Night

It's no secret that the time when Jose Canseco was a Ranger is a dark period in team history.   His presence on the team from late 1992-1994 brought PED use to the locker room and cast a long shadow over the career of Rafael Palmeiro and led to questions about Juan Gonzalez and Ivan Rodriguez.  Raffy, Juando and Pudge were grown men so whatever choices they might have made are their own responsibilty, but I wonder how things might have been, especially for Palmeiro, if Canseco had never played for Texas. 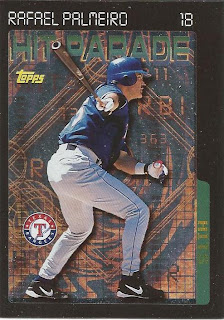 Is it a coincidence that Topps put Rafael Palmeiro on a Hit Parade insert?  I think not.

The Palmeiro card, along with all the rest of these, showed up in an envelope from the one and only Night Owl.  If you read his post about U2 and the 1987 Topps set, you know why I called him the one and only.  The man is a PROfessional writer and it shows.  Night Owl Cards was one of the first baseball card blogs I ever read.  He's a Night Owl and I work nights, thus the post title.  We've done so many trades, we don't really trade anymore.  We just mail packages to each other periodically. 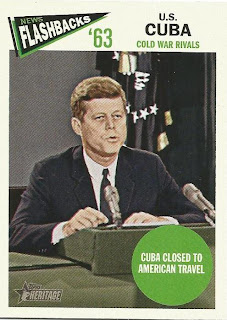 Like many bloggers, Greg pays attention when you say you like something.   He included 2 of these 2012 Heritage News Flashback Kennedy cards.  It's about time for me to figure out which ones I still need. 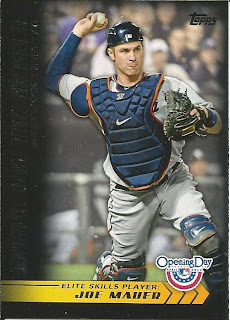 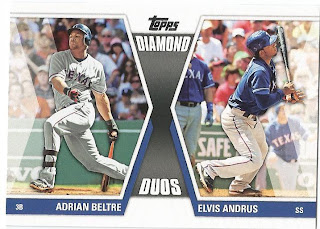 The first time my wife saw one of these cards, she thought it said Diamond Duds.  Most of them are Duds too because they show two players that have nothing to do with each other.  This 2011 Topps Diamond Duos Adrian Beltre/Elvis Andrus puts two guys together that make sense. 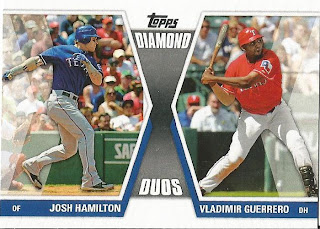 The same thing goes for this 2011 Topps Diamond Duos Josh Hamilton/Vladimir Guerrero.  The only problem with these cards is that Adrian Beltre and Vladimir Guerrero didn't play with the Rangers at the same time. 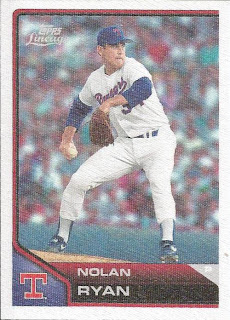 I'm very tempted to peel this 2011 Lineage Nolan Ryan Cloth Sticker and stick it on my locker at work. That's right.  I have a locker at work.  Unfortunately, I'm not allowed to "affix" anything to the outside of said locker. 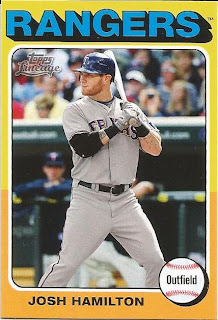 If you know the Night Owl, you know he's been pursuing these Lineage minis.  I can only assume he had a dupe of this Josh Hamilton 1975 mini.  It worked out good for me.  If you have any of these to trade, go check out Greg's want list.  I'm sure he'd appreciate it. I can always count on Greg to include at least one vintage Ranger card in an envelope.   He exceeded expectations this time with this 1977 Topps Gaylord Perry.  Perry is almost as happy to be back in Texas as I am to have him.

Greg, thanks for the fun package.
Posted by Play at the Plate at 7:30 AM